‘UltraRAM’ breakthrough could merge storage and RAM into one component

'UltraRAM' might make separate devices for computer storage and memory a thing of the past.

“What’s the difference between memory and storage?” It’s a computer question everybody asks at least once in their life. And if you’re the “computer person” in your family, maybe you’ve answered it a whole lot more. But with most standard computer storage shifting to ultra-fast SSDs so similar to flash memory that it’s kind of hard to tell them apart at a glance, the question is becoming a lot more relevant. Physicists from Lancaster University say that we might be close to combining them into a single piece of hardware, which they call UltraRAM.


First, a bit of context. While it’s true that random access memory and modern SSDs use similar types of storage, flash memory, they’re still used in very different ways. Computer RAM requires constant electricity in order to maintain the data in its memory, and if the power goes out, that data disappears. So RAM is used for information that’s needed quickly, but not on a permanent basis. Whereas the flash storage used for recording data — what’s still colloquially called the “hard drive” even if that’s no longer technically accurate — can keep data stored even when the power’s off. The same is true for, say, an SD card or a USB storage drive. These two types of storage are called volatile, requiring power, and non-volatile, storing data even when no power is present.


While it’s possible to use non-volatile storage for the same kind of tasks that RAM performs (things like scratch disks and Intel’s Optane memory are good examples), the lower speed makes this impractical for most applications. And so the status quo has remained in place for decades, for everything from a graphing calculator to a supercomputer: storage and memory are two separate parts that perform separate functions, despite now being based on broadly similar hardware. 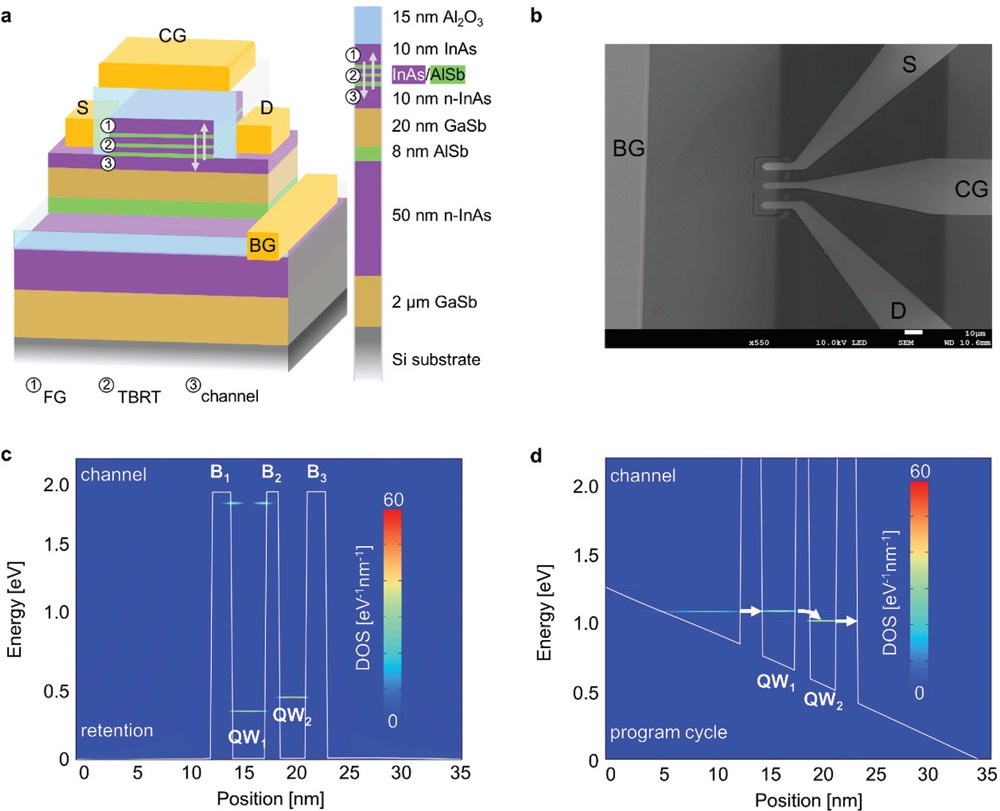 Wiley Online Library/Lancaster University
The paper published by a team of five physicists in the UK (and spotted by Tom’s Hardware) outlines how a new generation of memory, non-volatile and long-lasting for persistent data storage but fast enough to be used for random access tasks, could be built. Using newly-applied technology called InAs quantum wells and AlSb barriers, the researchers have proposed a theory for “UltraRAM” that could overcome the fragility weakness of persistent storage used for rapid reading and writing tasks.

To be frank, the physics and material science of the paper is way beyond the level of the layman (or, ahem, the average consumer electronics writer). But the gist is that applying these techniques and principles to manufacturing could create all-in-one storage and memory devices, resulting in simpler, cheaper, and faster manufacturing for more or less every kind of computerized device we use today.

While the Lancaster team performed some basic experiments to demonstrate the principles in action, UltraRAM remains mostly theoretical at the moment. Some kind of Achillies heel might make it much more difficult to manufacture or apply on a mass scale. It’s impossible to predict when, or if, something like this universal memory and storage solution could come to consumer devices—but it sure is an intriguing concept.
Click to expand...

Last edited by a moderator: Jan 12, 2022
Reactions: Venustus, shmu26, silversurfer and 1 other person
You must log in or register to reply here.