22 years ago, on February 17, 2000, Microsoft released the further development of Windows NT under the name Windows 2000 – internally the part was called Windows NT 5.0.
Brings tears to my eyes when I look at the system requirements: Pentium processor with 133 MHz, 64 MB RAM, a 2 GB hard disk with at least 650 MB free space and a CD-ROM drive.
And with that part we could somehow just work – no need for online accounts, a start menu that worked, and, and, and.
Long time ago.
Details have been collected by the guys and gals at Wikipedia. 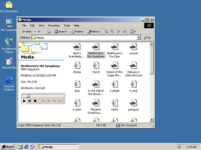 i remember it fondly.
Reactions: Venustus, Sorrento, ForgottenSeer 92963 and 4 others

Those were the days.
Reactions: Guilhermesene, Venustus, Sorrento and 5 others
F

I was still on Windows95 with my overclocked IBM486 DX2 which had a base frequency of 40 mhz (instead of 33) with a base multiplier of 2 (hence the DX2 suffix).

In those day you had to replace the 'crystal' to up the board frequency from 33mhz to a whopping 40 mhz.
Reactions: Venustus, Sorrento, mkoundo and 3 others

Viking said:
Those were the days.
Click to expand...

People don't use such kind of back dated programs yet. They always try to find out something new.
Reactions: Venustus and Sorrento

Same. I learned IT basics off that in college!
Reactions: The_King, oldschool and Venustus
You must log in or register to reply here.