This software has been around for quite a long time if I remember correctly. I am pretty sure that I saw it years ago somewhere but didn't really give it much attention. Today I was checking out a video of Computer Solutions and thought it would be worth sharing. Does or did anyone use it here on MT?

According to softpedia, the last update of this scanner was 5 years ago. Also, I don't believe in their own antivirus engine from a company that hasn't had any products for so many years of existence. I think they have long been closed, and the developers went to work in Gridinsoft (just a guess). =)
Reactions: Stopspying, Nevi, tipo and 7 others

i will pass
Reactions: Nevi, venustus, ZeePriest and 2 others
R

I tried it a long time ago and don't remember being particularly impressed by it. I just tried it again, as I could not remember much about it, other than it had issues with false positives.

When I launched it, it was unable to download updated signatures and when I manually checked for updates, it informed me that it was already up-to-date. However, when I launched it a second time, it did successfully update its signatures. I ran a few scans, including a so-called quick scan, which took over twenty minutes to complete. To be fair, the quick scan is fairly thorough.

I tested it against a large collection of installers, many of which could be classified as PUPs. The detection rate was surprisingly good for an abandoned product. Aside from detections of known PUPs and adware, there were a number of generic PUP and cloud based generic malware detections. There were some false positives, which were almost all generic detections. When I tested a large old collection of malware, it detected less than half the threats. As per the comment from @CyberDevil, I downloaded Gridinsoft's Trojan Killer and compared the scan results and I can confirm that both products have the same detections. But Trojan Killer had fewer false positives and detected more threats. 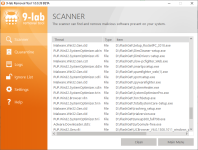