Researchers from Qihoo 360's Netlab security team have released details of a new evolving botnet called "Abcbot" that has been observed in the wild with worm-like propagation features to infect Linux systems and launch distributed denial-of-service (DDoS) attacks against targets.

While the earliest version of the botnet dates back to July 2021, new variants observed as recently as October 30 have been equipped with additional updates to strike Linux web servers with weak passwords and are susceptible to N-day vulnerabilities, including a custom implementation of DDoS functionality, indicating that the malware is under continuous development.

Netlab's findings also build on a report from Trend Micro early last month, which publicized attacks targeting Huawei Cloud with cryptocurrency-mining and cryptojacking malware. The intrusions were also notable for the fact that the malicious shell scripts specifically disabled a process designed to monitor and scan the servers for security issues as well as reset users' passwords to the Elastic cloud service.

Now according to the Chinese internet security company, these shell scripts are being used to spread Abcbot. A total of six versions of the botnet have been observed to date.

Once installed on a compromised host, the malware triggers the execution of a series of steps that results in the infected device being repurposed as a web server, in addition to reporting the system information to a command-and-control (C2) server, spreading the malware to new devices by scanning for open ports, and self-updating itself as and when new features are made available by its operators.
Click to expand... 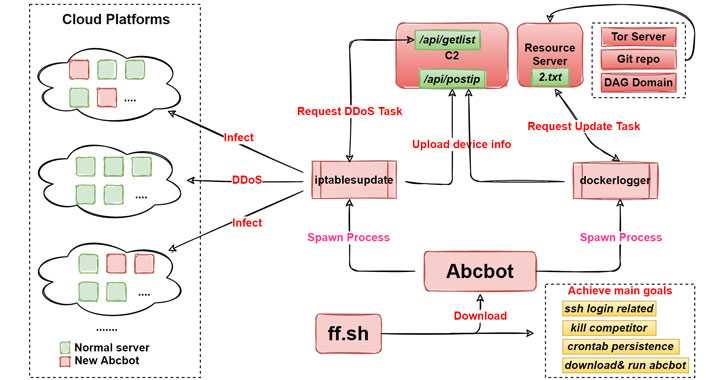 Researchers are warning of a new evolving botnet that has been spotted in the wild and has worm-like spreading capabilities to infect Linux systems.

thehackernews.com
Reactions: upnorth, SeriousHoax, The_King and 3 others
You must log in or register to reply here.