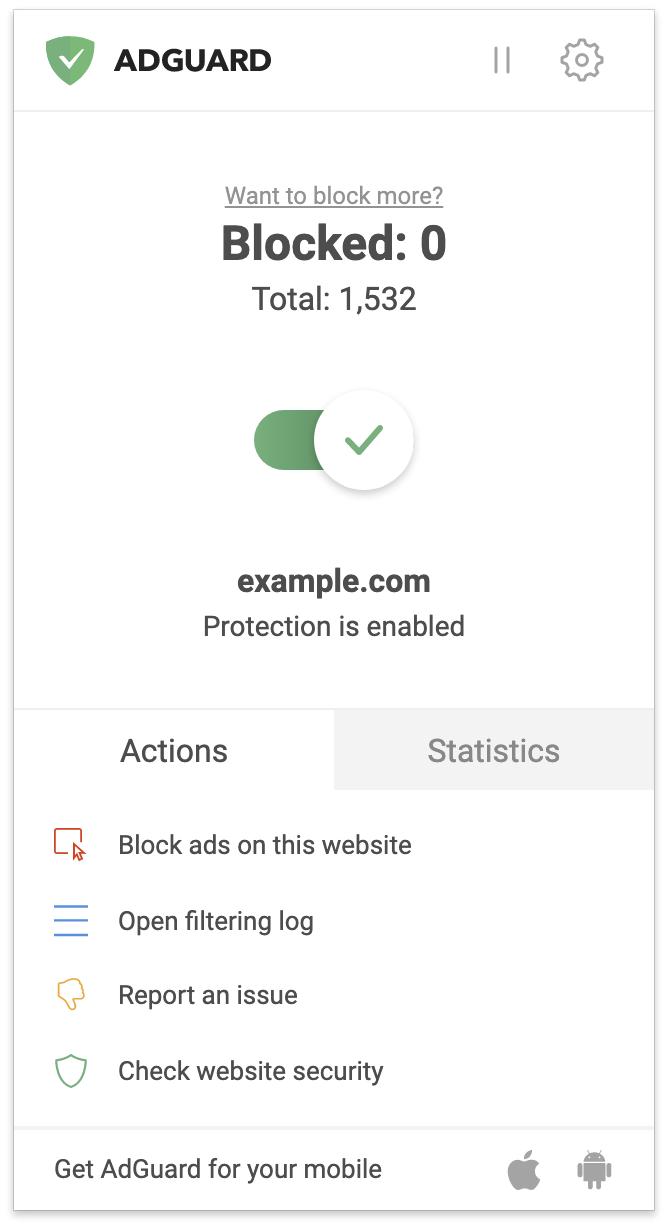 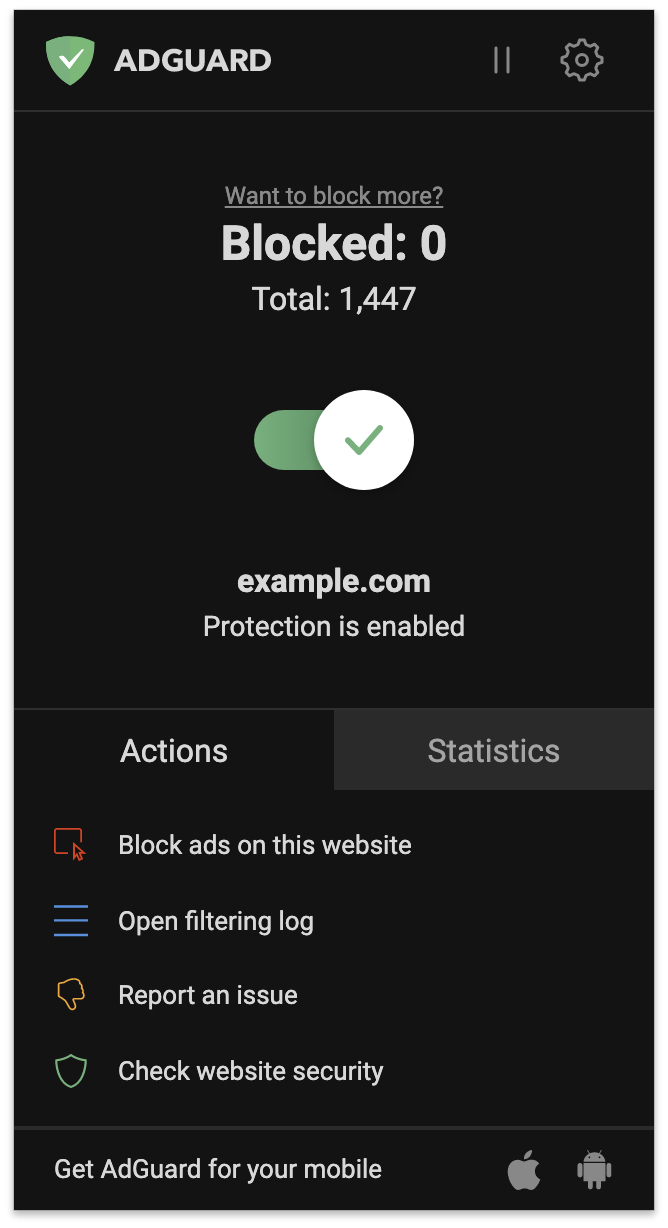 Meet AdGuard Browser Extension v4.0! It’s not a mere update, but a major release that delivers a pack of new features to the users of the extension.

Refactoring has become sort of a buzzword that implies massive code rewriting, which we did to complicate our lives and make it easier in the long run. Besides, we added support for TSUrlFilter, our new filtering platform that implements AdGuard content blocking rules.

TSUrlFilter is a filtering engine. In AdGuard apps, its role is performed by CoreLibs, and if happen to read release notes, you must have heard about it more than once. TSUrlFilter is a rule application module that will be used in various projects, including AdGuard DNS.

We switched to responsive (or adaptive) design. That is to say, that interface elements will adapt to screen size both on desktop and mobile devices, redardless of the model.

This is convenient both for us, because we don't need to develop separate versions of the Browser extension, and for users — it's always nice when an app (or a browser extension, in the case given) looks good.

Now the filtering log not only сomplies with the principles of the responsive web design, its overall appearance has changed significantly. If you used the former filtering log, you'll be able to tell the difference: the new version presents searching in tabs, many new request statuses and filters that facilitate finding the needed requests. New filters and statuses are highlighted, and and tooltips explaining each one pop up when hovering a cursor over them. Apart from that, you can preview requests and format them in the same dialog — clicking the "Beautify" button makes it easier to read these requests.

The editor in the User rules section can now be opened in fullscreen mode, which makes working adding, editing, and deleting filter rules much more convenient. Finally, there is a new action on the AdGuard Browser Extension popup that allows to reset all the user rules for the currently opened website in one fell swoop.

Besides, now the AdGuard Browser Extension features dark theme that everybody loves so much.

Support for new modifiers after switching to TypeScript​

"Still don't get what makes TSUrlFilter better than the previous filtering engine?" the most curious may ask. Probably, the main advantage is te new modifiers: $removeheader, $redirect-rule, $ping, $path, $noop, and $denyallow. And the $redirect modifier has been significantly improved, so now all the $redirect rules for a website can be cancelled by applying @@||example.org^$redirect.

Apart from the above-mentioned, Hebrew and Finnish localizations were added.

This version already has a hotfix for a rather severe bug of the initial v4.0 beta build. It blocked access to web pages misreporting them as phishing ones due to Safebrowsing bug:

How to install beta:​

Thanks. Taking it for a spin.
Reactions: brambedkar59, Venustus, SeriousHoax and 7 others
F

Thx, In my Edge easy mode profile, I replaced uBO with AdGuard
Reactions: Venustus, silversurfer, Gandalf_The_Grey and 1 other person

Switched back to AdGuard Browser Extension from AdGuard Windows to try v4. Only side issue to decide on is whether to set up secure DNS in Browser (Brave & Edge) or use a DNS client (YogaDNS).
Reactions: Venustus and amirr

@JasonUK Why you decided to not use AdGuard for Windows?
J

amirr said:
@JasonUK Why you decided to not use AdGuard for Windows?
Click to expand...

No particular reason other than to check out the browser extension which I've used previously There is a slight time-lag when loading webpages using AdGuard for Windows compared to uBlock Origin or AdGuard Browser Extension in my experience. If the ad/tracking protection is pretty close to desktop version in v4 may switch to the extension for a while.
Last edited: Nov 26, 2021
Reactions: Venustus, Gandalf_The_Grey and amirr
F

When uBlock also implemented the $removeparam URL filtering option of AdGuard, GorHill warned that one badly crafted removeparam rule would be as cpu intensive as 10.000 wel contructed rules. Because I like to use as few rules as possible and the Adguard URL Tracking protection list contains over 90 generic removeparam rules (generic rules are often called badly crafted rules) I always doubted between one-setup for both my easy and hard edge profiles or use a best blocking extension for browsing purpose.

With Adguard v4 having an improved rule processing engine, I finally settled for using the best extension for my browsing purpose profile:
- Hard mode profile: uBlockOrigin in hard mode without any adblock filters in uBO, because I have Edge tracking protection on strict
- Easy mode profile: Adguard v4 with two default lists and three custom lists with Edge tracking protection on default

Total rule count is just above 8000, with no website breakage because I added the Easylist allow lists. I really like the new filtering log. It was very easy to copy the AG base rules for youtube (just start youtube and see which requests are blocked/modified and copy them to User Rules).

Last edited by a moderator: Nov 27, 2021
Reactions: Venustus, oldschool, silversurfer and 3 others
F

My wife finds the 'extra information' distracting. She holds two Master degrees (in Psychology and HR) so not a dumb 'Sheila' but a typical I hate confusing technology kind of PC user ("technology designed by men, who see to little sunlight and women" when she complains about IT or Tech). Last edited by a moderator: Nov 27, 2021
Reactions: Venustus, Sorrento, SecureKongo and 3 others
J

It's interesting to see how v4 beta is changing some of the user rules that I had set up in v3 when copied across ~ examples of each change below together with comment what original rule was aiming to achieve! The TLD's blocked are taken from Spamhaus' list of most abused TLDs at The Spamhaus Project - The Top 10 Most Abused TLDs


I won't pretend to understand structure of new rules but they block the TLDs effectively enough (same blocking screen as AdGuard for Windows). Blocking the TLDs are probably unnecessary to be honest as chances of visiting most of them are slim to nil so I might delete those anyway.
Last edited: Nov 27, 2021
Reactions: Venustus, SecureKongo, SeriousHoax and 2 others

oldschool said:
Thanks. Taking it for a spin.
Click to expand...

JasonUK said:
Switched back to AdGuard Browser Extension from AdGuard Windows to try v4. Only side issue to decide on is whether to set up secure DNS in Browser (Brave & Edge) or use a DNS client (YogaDNS).
Click to expand...

Also, thanks and now I can get back to KIS and enable these settings mentioned this thread:

Hi all. I keep these options enabled in KIS as shown in the screenshot below: And I guess keeping those options above as enabled, would not have any conflict with keeping these options below in Adguard for Windows, enabled, is that true? I talked with a friend about this, and his idea is...

Adguard browser extension works independent and it's free to use, same as other well-known adblockers like AB+ or uBO.
Your Adguard license isn't required

AdGuard browser extensions are among the fastest and most lightweight adblock extensions available. Choose AdGuard to block ads, pop-ups, and tracking.

@silversurfer Thanks a lot. ^_~
Reactions: Venustus, SeriousHoax, CyberTech and 1 other person

Adguard offers a lot of guides including AdGuard browser extension, it's useful even for long time users, sometimes new features are added...

I wish it had a UI like this to instantly check what's allowed and what's blocked without requiring to open filter log and reload the page. 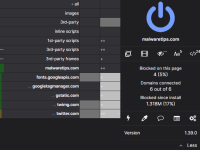 I understand that AG wants to push out a stable 4.0 first, 4.1 is usually a catch up release with 'nice to haves' which did not make in 4.0.

Considering the fact that I added this request after the release of the 4.0 beta (and it is a nice-to-have with low priority). I am
Reactions: Venustus, kopukum, blackice and 5 others
F

Global Privacy Control feature is not working in 4.0.64 beta.

SeriousHoax said:
I wish it had a UI like this to instantly check what's allowed and what's blocked without requiring to open filter log and reload the page.
View attachment 262373
Click to expand...

I have this also