" Brave Browser will soon redirect webpages, that use Google's AMP technology, to the publisher website automatically. AMP, which stands for Accelerated Mobile Pages, is a technology by Google that Brave considers to be harmful to a user's privacy, security and experience. " 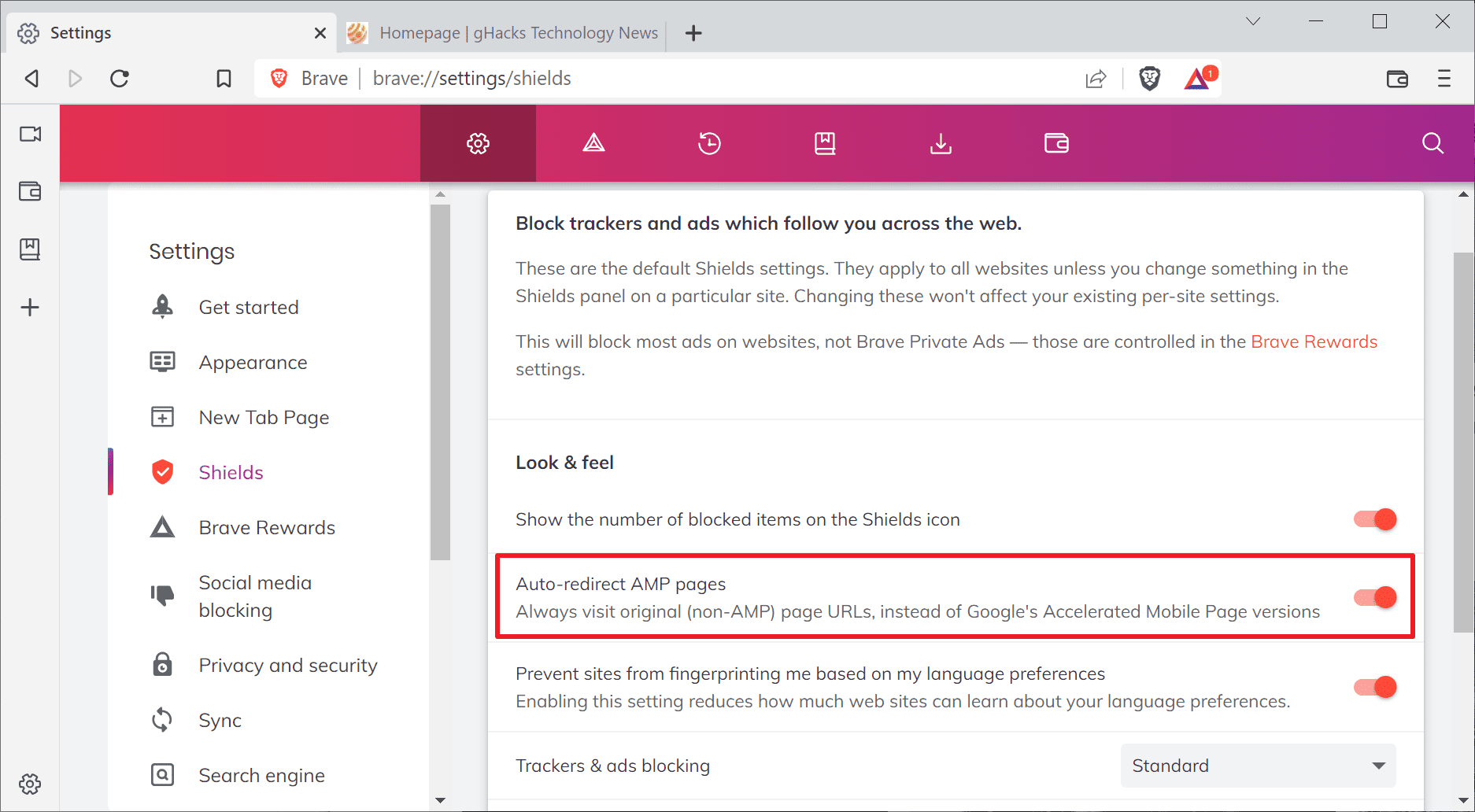 Google claims that AMP is improving the user experience by improving the performance when loading AMP-powered webpages. The pages are served from Google servers, and Google uses preloading techniques and its own servers to serve AMP content. Pages that are loaded using AMP look as if they come from the publisher's website, but that is actually not the case.

In the past, we have highlighted several techniques to avoid AMP pages. Anti-AMP extensions are available for most browsers. Firefox users may check out Redirect AMP to HMTL, Chromium-browser users the version of the extension for their browser.

Brave Software highlights the following issues of Google's AMP technology:
Google is working on AMP 2.0 already, even though it is not called that by Google. The next version uses Signed Exchange and WebBundle technologies, proposed by Google, and will result in "more of the Web to be served from Google's servers" and "give users less control over how they interact with that content" according to Brave.

Brave considers Signed Exchange and WebBundles to be problematic from a privacy, performance and user-control viewpoint.
Click to expand...

Starting in Brave 1.38, and available in Beta and Nightly browser versions already, De-AMP is activated in Brave automatically by default.

With De-AMP enabled, Brave attempts to parse links directly to redirect the loading to the publisher's website immediately; this is the case for Google Search among other pages. Brave will also look for AMP HTML markup to identify AMP page loads. Brave intercepts the request and redirects it to the publisher's website automatically. The company notes that Brave does so before Google AMP scripts are fetched and loaded.

Brave Software plans to extend the protection in Brave 1.40 by extending the browser's debouncing privacy feature to include AMP URLs.
Click to expand...

Brave Browser will soon redirect webpages, that use Google's AMP technology, to the publisher website automatically.
www.ghacks.net
Reactions: Andrew999, Virtuoso, Idanox and 8 others

Not a big fan of Brave, but AMP has been ruining mobile browsing for years. This is great.
Reactions: Andrew999, gisot, Idanox and 4 others

This is really cool.
Reactions: Andrew999, Deletedmessiah, silversurfer and 2 others

blackice said:
Not a big fan of Brave, but AMP has been ruining mobile browsing for years. This is great.
Click to expand...

Can't wait for AMP to die, seriously. I am surprised took so long for Brave to implement this.
Reactions: Andrew999, Idanox, Deletedmessiah and 3 others

I wish Brave would fix the horrible white flash it has when opening new tabs or minimizing the browser and then maximizing it again. It's been a known issue for years and it is still not fixed. Brave was my default for a few years but I've moved onto Edge which does not seem to have this issue for me.
Reactions: brambedkar59

DuckDuckGo agreed for privacy issues due to AMP, but even Brave is mentioned in this article:

Brave reduces the page load performance cost of its adblocker