WARNING.
This article should not upset Home users, because the chances of such attacks (via never-seen malware) are very small in the Home environment. They can be important in Enterprises (targeted attacks).


Advanced persistent threats pose a significant challenge for blue teams as they apply various attacks over prolonged periods, impeding event correlation and their detection. In this work, we leverage various diverse attack scenarios to assess the efficacy of EDRs and other endpoint security solutions against detecting and preventing APTs. Our results indicate that there is still a lot of room for improvement as state of the art endpoint security systems fail to prevent and log the bulk of the attacks that are reported in this work. Additionally, we discuss methods to tamper with the telemetry providers of EDRs, allowing an adversary to perform a more stealth attack.

Cyber attacks are constantly evolving in both sophistication and scale, reaching such an extent that the World Economic Forum considers it the second most threatening risk for global commerce over the next decade [9]. The underground economy that has been created has become so huge to the point of being comparable to the size of national economies. Contrary to most cyberattacks which have a ‘hit-and-run’ modus operandi, we have advanced persistent threats, most widely known through the abbreviation APT. In most cyber attacks, the threat actor would try to exploit a single exploit or mechanism to compromise as many hosts as possible and try to immediately monetise the abuse of the stored information and resources as soon as possible. However, in APT attacks, the threat actor opts to keep a low profile, exploiting more complex intrusion methods through various attack vectors and prolong the control of the compromised hosts. Indeed, this control may span several years, as numerous such incidents have shown.
Due to their nature and impact, these attacks have received a lot of research focus as the heterogeneity of the attack vectors introduces many issues for traditional security mechanisms. For instance, due to their stealth character, APTs bypass antiviruses and therefore, more advanced methods are needed to timely detect them. The goal of an Endpoint Protection Platform (EPP) is prevent and mitigate endpoint security threats such as malware. Going a step further, Endpoint Detection and Response (EDR) systems provide a more holistic approach to the security of an organisation as beyond signatures, EDRs correlate information and events across multiple hosts of an organisation. Therefore, individual events from endpoints that could fall below the radar are collected, processed, and correlated, providing blue teams with a deep insight into the threats that an organisation’s perimeter is exposed to.
Despite the research efforts and the advanced security mechanisms deployed through EPPs and EDRs, recent events illustrate that we are far from being considered safe from such attacks. Since APT attacks are not that often and not all details can be publicly shared, we argue that a sanity check to assess the preparedness of such security mechanisms against such attacks is deemed necessary. Therefore, we decided to conduct an APT group simulation to test the enterprise defences’ capabilities and especially EDRs, covering also some EPPs. To this end, we opted to simulate an APT attack in a controlled environment using a set of scripted attacks which match the typical modus operandi of these attacks. Thus, we try to infiltrate an organisation using spear-phishing and malware delivery techniques and then examine the IOCs and responses produced by the EDRs. We have created four such use case scenarios which are rather indicative and diverse enough to illustrate the weak points of several perimeter security mechanisms, focusing more on EDRs.
...​
Click to expand... 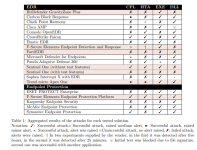 Edit.
Post edited to include the corrected and extended article mentioned by @upnorth .

I would like to note the significant difference between AVs (normally discussed on MT) and EDRs.

EDRs correlate information and events across multiple hosts of an organization. Therefore, individual events from endpoints that could fall below the radar are collected, processed, and correlated, providing blue teams with a deep insight into the threats that an organization’s perimeter is exposed to.
Click to expand...

Andy Ful said:
I would like to note the significant difference between AVs (normally discussed on MT) and EDRs.
Click to expand...

F-Secure discovered that the two researchers didn’t use F-Secure’s EDR, but included only F-Secure’s End Point Protection in their test which by design wouldn’t detect the attacks as they were performed without a malicious payload that performed system changes or malicious process execution. As the researchers aimed to test EDR products, their methodology was mostly simulating attack techniques without a malicious payload.

F-Secure reached out to the researchers on 12 July, informed about their mistake and collaborated in retesting with the correct product and configuration. F-Secure’s EDR was able to detect 3 out of the 4 performed attacks. Our Detection and Response Team is already analyzing the missed attack to improve F-Secure EDR further.
Click to expand...

We have now been notified that the revised version of the paper has now been released and can be accessed from the following links:
Click to expand...

Thanks. I updated the OP.
Several months ago, I made a similar test for Norton 360, and the attack based on EXE, DLL was blocked by Download Insight. I was positively surprised that Norton blocked the DLL side loading attempt because most similar solutions can block DLLs only when executed via RunDll32, etc.
I did not test HTA and CPL files.
Last edited: Aug 27, 2021
Reactions: Mercenary, AtlBo, KonradPL and 4 others

After reading carefully this article, one should also understand how important is prevention against malware elevation. If the malware can get high privileges, then there are several clever ways to bypass most security solutions. For some time, such attacks can be efficiently mitigated by the security solutions that can use consistently virtualization-based security to protect the OS kernel.
Last edited: Aug 27, 2021
Reactions: Mercenary, CyberPanther, AtlBo and 4 others

You could try the most powerful consumer solutions such as Bitdefender, Kaspersky among others to see how they behave against such attacks
Reactions: AtlBo and KonradPL
You must log in or register to reply here.