" Firefox 102 and Firefox 102 ESR will be released later today. The new version of Mozilla's Firefox web browser improves security, picture-in-picture mode, and is the new base for the Extended Support Release channel. " 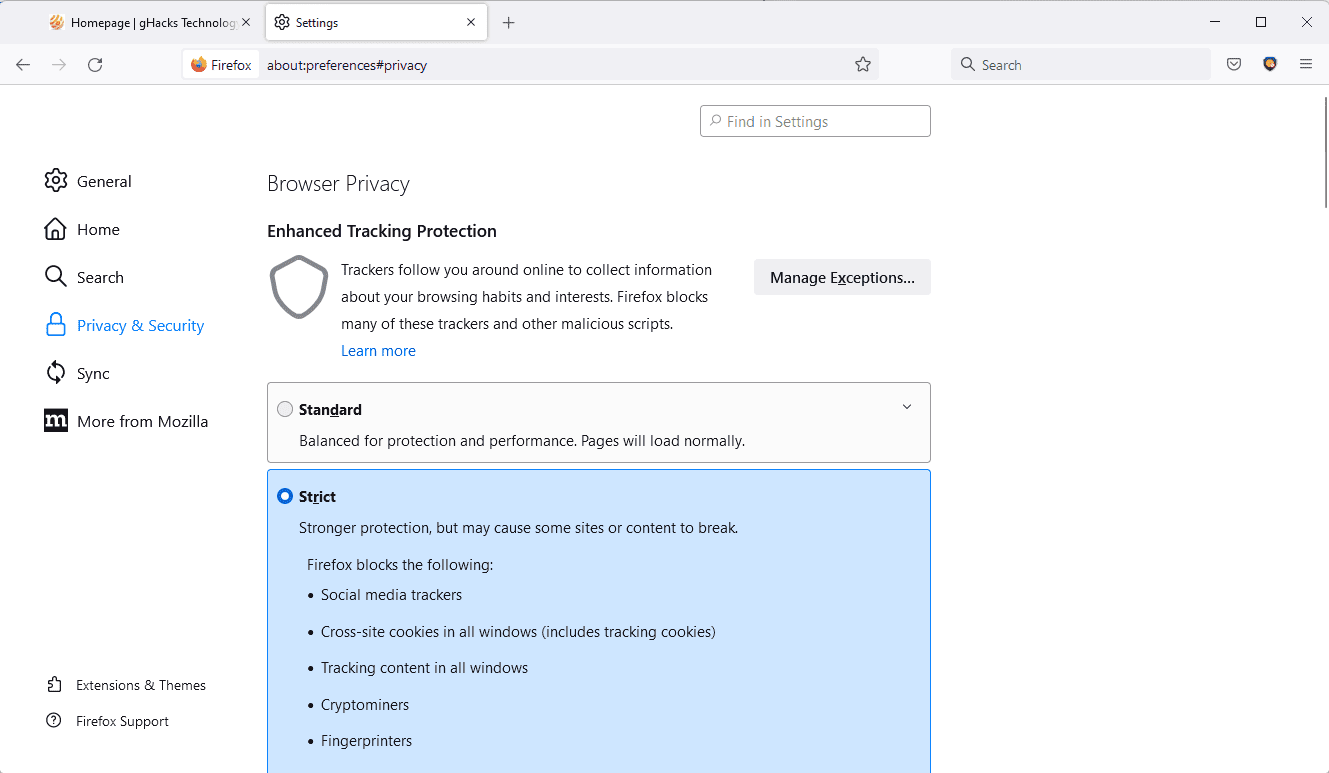 Firefox removes parameters from URLs automatically when these may be used to identify and track users. The removal should not impact the loading of the target address.

Starting in Firefox 102, a blocklist is used to strip known tracking parameters from top-level URLs.

The feature is enabled in the browser's private browsing mode and when Firefox's Enhanced Tracking Protection feature is set to strict.

Do the following to enable strict Tracking Protection: 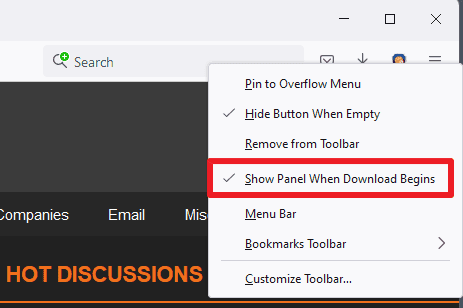 To do that, right-click on the download icon and select "Show Panel when Download Begins" to toggle the functionality. If you see no checkmark in front of it, Firefox won't display the download panel. 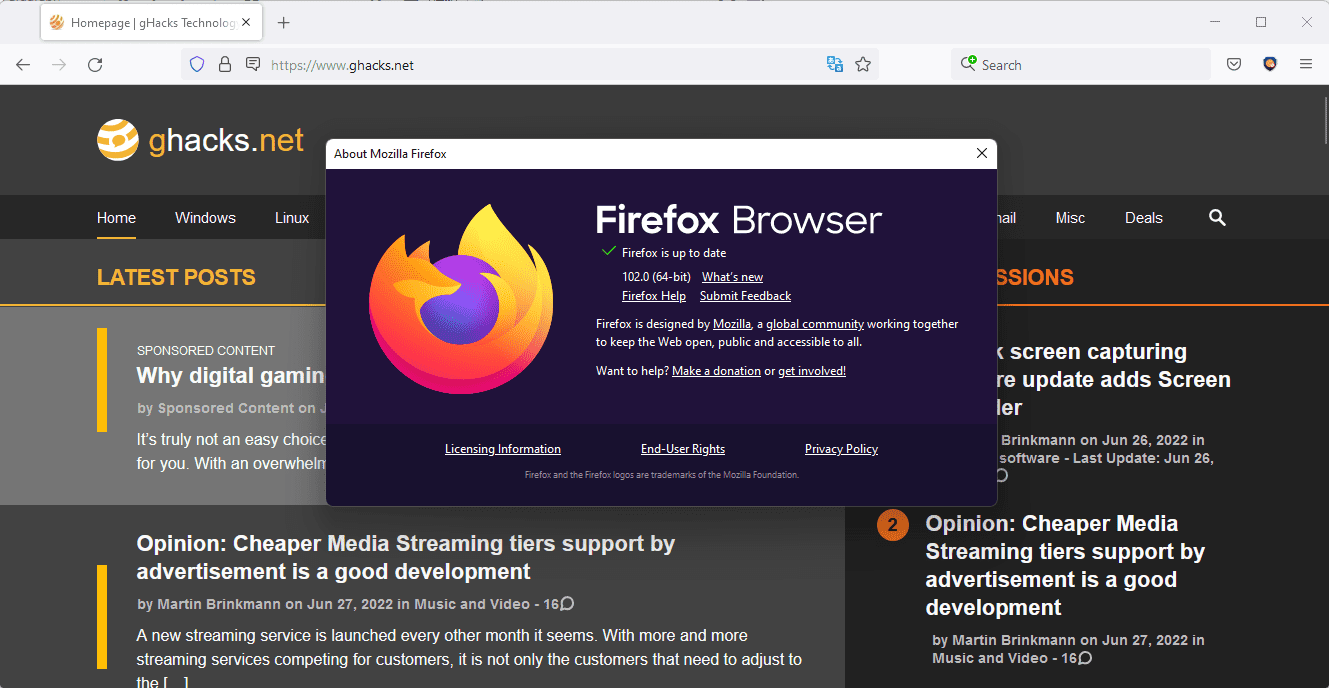 With the release of Firefox 102, Mozilla has added the new 'Query Parameter Stripping' feature that automatically strips various query parameters used for tracking from URLs when you open them, whether that be by clicking on a link or simply pasting the URL into the address bar.

Once enabled, Mozilla Firefox will now strip the following tracking parameters from URLs when you click on links or paste an URL into the address bar:

Reportedly, this feature is now enabled with the Strict tracking protection enabled in Settings. There are additional considerations in the article.
Reactions: JB007, Gandalf_The_Grey, silversurfer and 8 others

@SeriousHoax found yesterday the same hint for 'Firefox Private Browsing Mode'. Today, it's mentioned in this report from ghacks:

Do the following to enable the removal in Firefox with default tracking protection enabled:
Tip: you may want to set privacy.query_stripping.enabled.pbmode to TRUE as well, in case it is not. Setting the preference to TRUE enables the query stripping functionality in Firefox's private browsing mode.

True means, query stripping is enabled in Firefox. You may run the test mentioned above and should notice that the tracking parameter is removed.

The built-in feature in Firefox and Brave uses a list of known trackers; this means, that trackers that are not on the list are not removed. Still, the feature removes tracking parameters by major sites and companies, such as Google, Facebook or Microsoft.
Click to expand...

Find out how to configure Firefox to remove known tracking parameters in web addresses automatically.
www.ghacks.net
Reactions: plat, SeriousHoax, JB007 and 2 others

Firefox 102.0.1 is a stability and bug fix release. It addresses several issues that users of Firefox 102 and earlier could run into.

Firefox users who have configured the browser to delete cookies and site data on exit started to notice that the browser was not remembering the setting anymore. Each time the browser restarted, Firefox would reset the preference so that it appeared unchecked and inactive.

Mozilla engineers who analyzed the issue noticed that the bug affected the checkmark of the preference only. In other words: cookies and site data were still deleted on exit by the browser, even though the preference itself was unchecked by it.

Mozilla introduced support for checking the spelling of multiple languages in Firefox simultaneously in Firefox 100, which it released in May 2022. The feature works fine for most language combinations, but a bug caused issues on pages with English and non-Latin words. Mozilla confirmed the issue with Russian, Hebrew and Greek languages, and the Firefox 102.0.1 release fixes it.

The next two issues fixed in Firefox 102.0.1 address bookmark related issue. The first fixes a bookmark shortcut creation bug on Windows that broke drag & drop functionality. Firefox supports dragging links or images to the desktop. The bug affected filenames with invalid characters only, but caused the drag & drop operation to fail.

The second bookmark related issue addresses a visual issue. Firefox users who opened the bookmarks sidebar in dark mode may have noticed that it flashed white while doing so. Firefox 102.0.1 addresses the issue.

The final issue that Mozilla addresses in the new Firefox Stable release fixes a bug in the Developer Tools. Firefox's developer console output would scroll to the bottom automatically when the last visible message was an evaluation result.

Mozilla lists "various stability fixes" without going into details as well in the release notes.
Click to expand...