Firefox Premium a Real Thing Now, to Launch in October

Mozilla will launch a subscription-based service called Firefox Premium that will provide users with a series of benefits, including cloud storage and VPN support.

While it’s important to note that Firefox Premium doesn’t mean Mozilla will charge consumers for using Firefox, the company is indeed looking for an alternative source of revenue, and a subscription service seems to be the right way to go.

Firefox Premium will come with cloud storage and a VPN service, according to Mozilla CEO Chris Beard.

The CEO explained in an interview with German magazine T3N (via WF) that Firefox Premium is projected to launch in October, so unless something goes wrong in the meantime, we should be able to try out the service in just a few months.

Free version coming too
And by the looks of things, Mozilla wants to let everyone get a taste of Firefox Premium, as the service will also be released with a free version. In other words, users will be allowed to register for Firefox Premium without paying, albeit this option comes with a series of restrictions, such as a limited amount of cloud storage and bandwidth for the VPN service.

Needless to say, the main selling points of this offering will be enhanced security and privacy when browsing the web.

As the maker of the world’s second most-used desktop browser, Mozilla won’t be the first company bundling such services with their applications, albeit given how large its userbase currently is, there’s a good change a substantial share would give it a try.

Firefox is currently running on some 10 percent of the desktop computers across the world, whereas Google Chrome, which continues to be the number one, has a market share of approximately 67 percent.

Firefox, on the other hand, is seen as the main alternative to Chromium-based browsers, especially after Microsoft decided to give up on EdgeHTML and switch to the same engine as Google Chrome.
Click to expand...

Verified
Staff member
Any news regarding which providers for cloud storage and VPN? 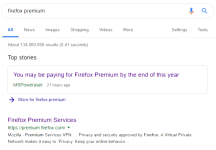 Verified
Content Creator
Not sure if good or not

Rather just get actual VPN or use TOR instead, well depends of the price of VPN (proxy) they offer

Verified
Content Creator
Malware Tester
Definitely worth a try. Firefox has always been a good option, and sadly it's loosing market lately, specially with Edge migrating to Chromium. I understand they need to focus on revenue since free services with no ads are a bit complicated, since donations not always are good enough. Let's see what the Mozilla Team has to offer us and hope we can all give it a shot!
B

I hope their VPN won't be restricted to Firefox but will run with other browsers like Edge...a real VPN.
You must log in or register to reply here.