Google plans to run an RSS feed reader experiment in the Android version of its Chrome web browser soon. A new announcement on the official Chromium blog reveals details on the plan. According to the announcement, Google will add an "experimental Follow feature" to Chrome Canary for Android for "some users in the US" to determine whether there is enough interest for the feature to be included in all versions of the browser.

When Google killed Google Reader in 2013, the most popular RSS feed reader at the time, many thought that this would be the end of RSS on the Internet. There were plenty of alternatives and sites did not just stop supporting RSS out of a sudden thanks to built-in support in many popular content management systems.

RSS has several advantages over solutions such as email newsletters or notifications. It is widely available, but not always displayed prominently on sites, it gives users options to read the news using a web service, desktop program, mobile app, or by using a browser extension, and its support is unmatched when compared to the other options.
Click to expand... Google's integration allows users to follow sites that support RSS with just two taps. Open the menu in Chrome and select the "follow" option in the menu to add it to the list of subscribed feeds. Chrome does not mention RSS in any way, nor other terms such as feed or XML.

A new "following" tab is added to Chrome's new tab page that lists posts in chronological order. Only the title, source, time of publication, and a screenshot or icon, are displayed on the following page.

Google does not reveal anything else about the new functionality; especially the management options will be interesting. Since it is bare bones, it seems likely that Google will add basic unsubscribe options but no advanced features such as support for importing or exporting a list of feeds (OPML is the standard for that).
Click to expand... 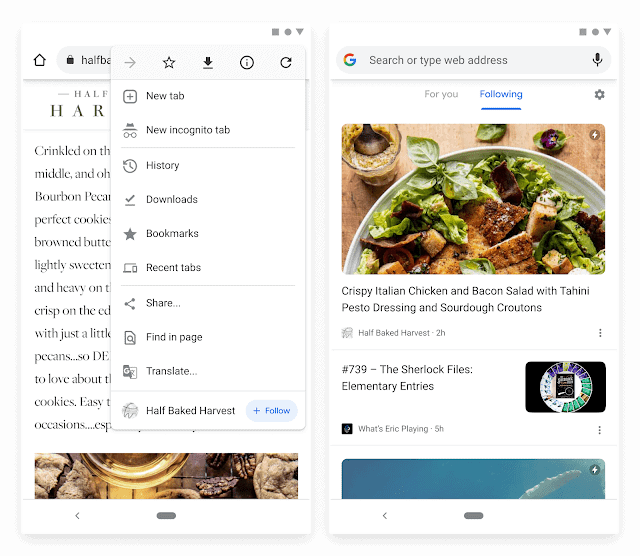 Google plans to run an RSS feed reader experiment in the Android version of its Chrome web browser soon.
www.ghacks.net
Reactions: CyberTech, SeriousHoax, pablozi and 5 others
You must log in or register to reply here.

You can now enable Windows 11 design in Google Chrome 96

Chrome 94: open all bookmarks of a folder in a tab group