Google working on permissions in Chrome

When a Chrome user opens a site on the Internet that requests a permission, e.g., a maps service requesting the location permission, Chrome displays a large prompt in the top left corner. The prompt remains visible on the page until the user interacts with it, reloads the page or navigates away. The permission prompt has block and allow buttons, and an option to close it.

Google engineers looked at telemetry data recently to better understand how users interacted with these prompts. According to that data, permission prompts are either ignored or dismissed by an average of 85% of users. An additional 9% of users selects the block option to prevent the site from displaying prompts in the future; this leaves less than 7% of all users who select allow as the action.

The prompts stand out and insist that users make a decision, as they remain visible if the user chooses to ignore the prompt completely. The urgency of the prompt and the low number of users that interact positively with the prompts gave Google a reason to look for an alternative.

Starting in Chrome 98, Google users will see an animated chip UI in the browser's address bar when a site requests a permission. It displays an icon and the name of the permission that the site requests, and users may click on it to display the full prompt that allows them to allow access to the function that is requested or block it.

There are exceptions to the default behavior (there are always exceptions, are not there?):

Google rolls out the new functionality to all Chrome users over time. Chrome users who want to enable it right away can do so by enabling the following flags:
A restart is required before the changes are visible in the browser.
Click to expand... 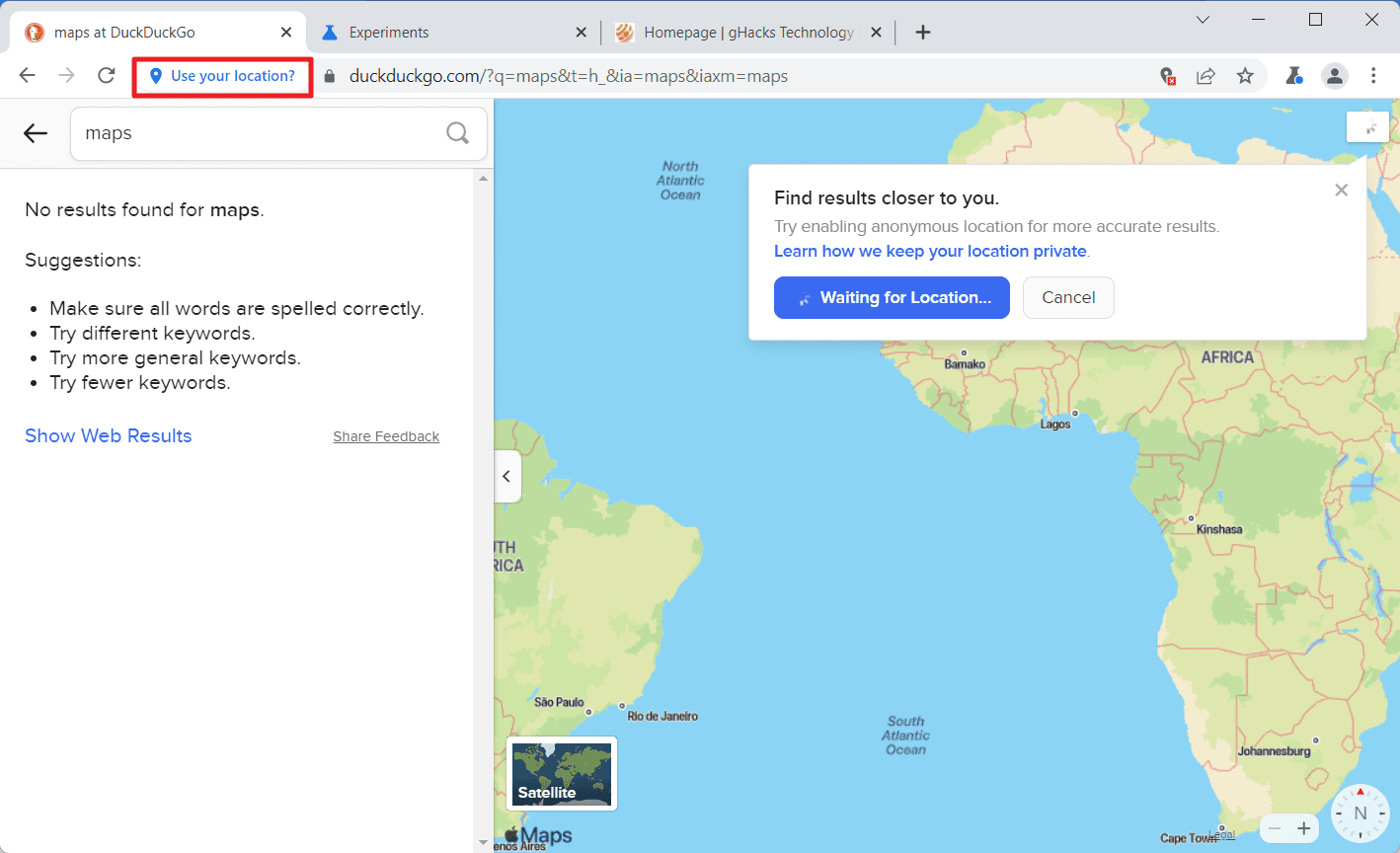 Chrome: Google is adding a Permissions Tab to the Extensions Menu​

Google Chrome displays an extension icon in its toolbar that lists all installed and enabled browser extensions. The menu will soon feature a permissions tab to give users control over site access permissions. 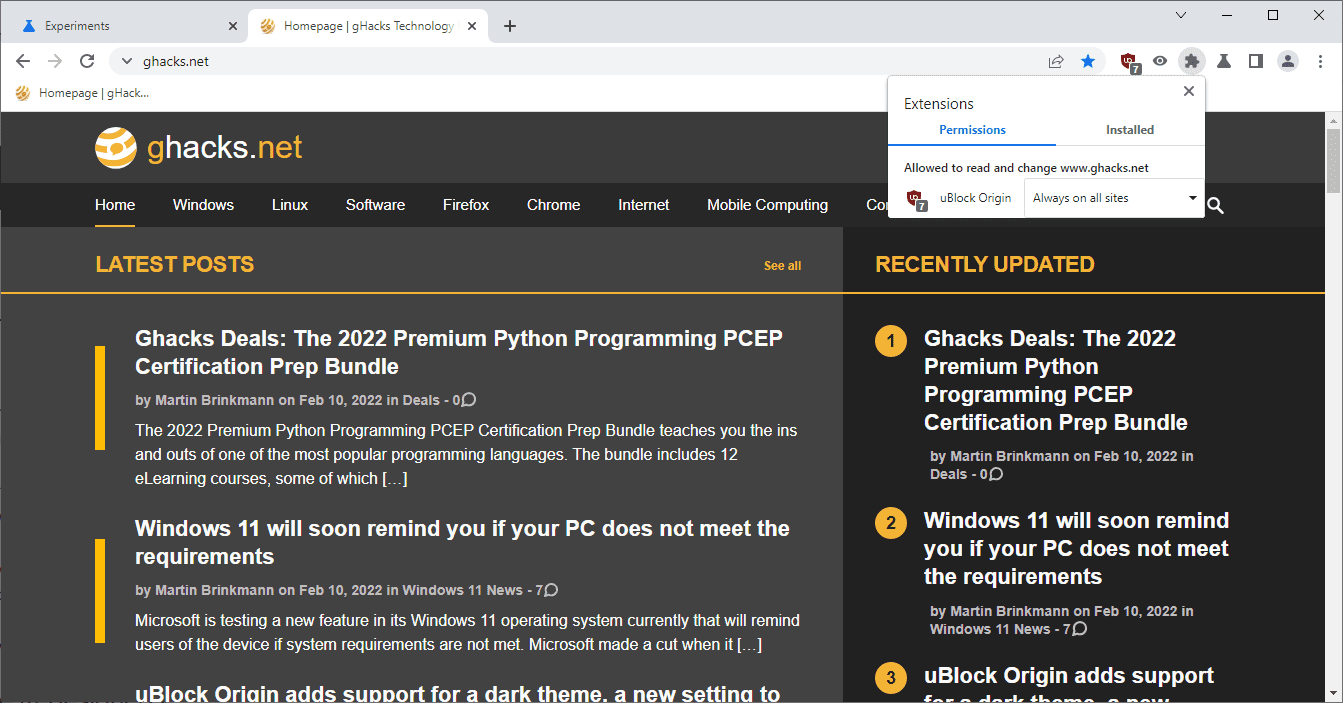 The new extensions menu displays the tabs permissions and installed. You find everything that is currently available under installed. Permissions is new and a click on the tab displays all installed extensions and their rights to read and change data on the active site. Three states are currently supported: always, always on all sites, and when I click the extension.

Permissions can be changed using the new menu. Google seems to focus the permissions tab to read and write access only. Extensions may request other permissions, but these are not listed currently. 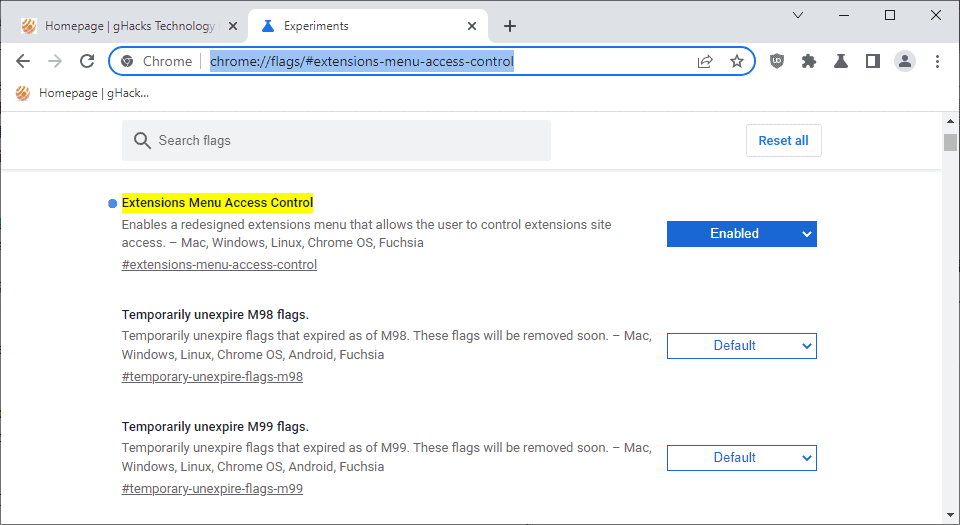 The new permissions menu is in testing currently. Chrome users who run the Canary version may enable it in the following way:
Please note that the flag is available in stable versions of Chrome, but the full functionality is not yet implemented.

The read and write permission for each extension can be managed from the extensions menu from that moment on. Chrome users may access the setting on the extensions page in the Chrome browser as well currently. The new option improves the visibility of the option to users.
Click to expand...

Google is testing a new feature for its Chrome web browser that is adding a Permissions Tab to the Extensions Menu.
www.ghacks.net
Reactions: Venustus, harlan4096 and Gandalf_The_Grey

Google Chrome is blocking all downloads from Portable Apps