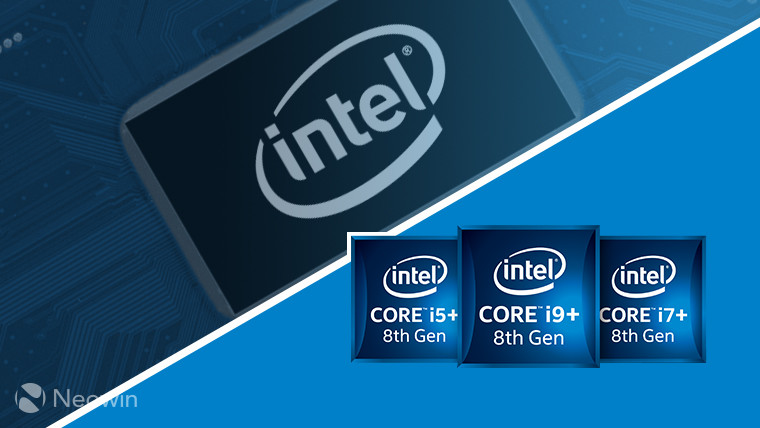 Up until now, Intel has been revealing its eighth-generation Core processors at a slow but steady pace. It started with the U-series last August, which are now quad-core, whereas they've previously been dual-core. In October, it announced new desktop chips that are hexa-core instead of quad-core, and then at CES in January, Intel announced new quad-core H-series processors with dedicated GPUs from AMD built into them.

The H-series processors mentioned above actually have the 'G' suffix, and today, Intel announced the actual 'H' chips. Obviously, the naming is a bit confusing, especially since the two lines of processors have different benefits. The 'G' chips are similar to the seventh-generation H-series processors but with a built-in dedicated GPU. There's no dGPU on the new 'Coffee Lake' H-series processors, but they do now come with six cores (12 threads) instead of four.

The H-series is described as 'high performance graphics', and they're made for powerful laptops, such as gaming PCs and mobile workstations. With that in mind, the big news is that Intel is bringing its Core i9 processor to laptops in the form of the Core i9-8950HK, with the 'K' suffix meaning that it's unlocked for overclocking. Intel says that it can achieve a turbo frequency of up to 4.8GHz.

Historically, the suffix on locked H-series processors has been 'HQ', as they were quad-core. HQ chips will still exist, but the new hexa-core processors will have the suffix 'H', including the Core i7-8750H and i7-8850H. The Core i5-8300H and i5-8400H are quad-core with eight threads. Finally, there are new hexa-core Xeon E processors, which are also 45W.

But that's not all that's new for laptops, as there are also some announcements for the U-series, which is the line of processors that you'll find in most ultrabooks and convertibles. The Core i7-8259U, i5-8269U, and i7-8559U are still quad-core with eight threads, but these models come with Iris Plus graphics instead of UHD Graphics 620, which is what's found in the existing 8th-gen processors. There's also a Core i3-8109U with Iris Plus, but it's dual-core with four threads.

On a side note, the seventh-generation Core i7 with Iris Plus is what's used in Microsoft's Surface Pro and Surface Laptop. If it seems like the products are due for an 8th-gen refresh, this could be what the company is waiting for.

Intel also expanded its eighth-generation desktop-class processor lineup today, with the Core i3-8300, i5-8500, and i5-8600. The i3 is quad-core and the i5 models are hexa-core, but they're not hyperthreaded.

There are also new vPro flavors of both mobile and desktop processors, which include Optane memory and Thunderbolt 3 support. These also include hardened multifactor authentication, improved BIOS security, and more.

Intel also said that some processors will be branded as Core i5+, i7+, and i9+, and that means that they have a combination of Intel Core performance and Optane memory.

With today's announcements of H-series, U-series with Iris Plus graphics, and T-series chips, the only thing missing from Intel's eighth-generation lineup is the Y-series, which is the rebranded Core M that means 'ultra-low power'. While the rest of the lineup has been focusing on more cores and power, it seems likely that the Y-series will continue to focus on efficiency, and it Intel could possibly be waiting for that to release its first 10nm chip.​
Reactions: SumTingWong, Vasudev, Gandalf_The_Grey and 5 others
You must log in or register to reply here.