Those leaks were real! Logitech is jumping into the handheld game console arena, and cloud gaming is the primary platform? The company has announced the "Logitech G CLOUD Gaming Handheld," a Steam Deck/Nintendo Switch-style portable that runs Android, has a full suite of controller buttons, and is meant to take your cloud gaming collection on the go.

The device is powered by an eight-core Qualcomm Snapdragon 720G—that's two Cortex A76 CPUs, four A55 CPUs, and an Adreno 618 GPU all built on an 8 nm process. That's a mid-range chip that's very close to what you get in a Pixel 5a. It's good enough for some local games, but those will be local Android games, and those are not the focus of this device. Besides the "Cloud" in the name, Logitech says the handheld takes "massive libraries of AAA titles and advanced graphics from the cloud and puts it all in your hands. This allows you to play a ridiculous amount of games from Xbox, Nvidia GeForce NOW, and even Steam Link." (Logitech continually snubs Stadia and Luna in its promotional materials, but presumably they will work, too.)

The spec sheet also includes a 7-inch, 60 Hz,1920×1080 LCD, 4GB of RAM, 64GB of storage, plus a MicroSD slot. There's a USB-C port for 18 W charging, a 3.5 mm headphone jack, stereo speakers, and Wi-Fi 5 (aka 802.11ac) support. For buttons, you get a pretty standard layout of a D-pad, two joysticks, ABXY face buttons, four shoulder buttons (two analog), and then four system buttons for things like "Home" and "Menu." Logitech's FAQ goes out of its way to say that video out is not supported, so no Switch-style TV hookups.
Click to expand... 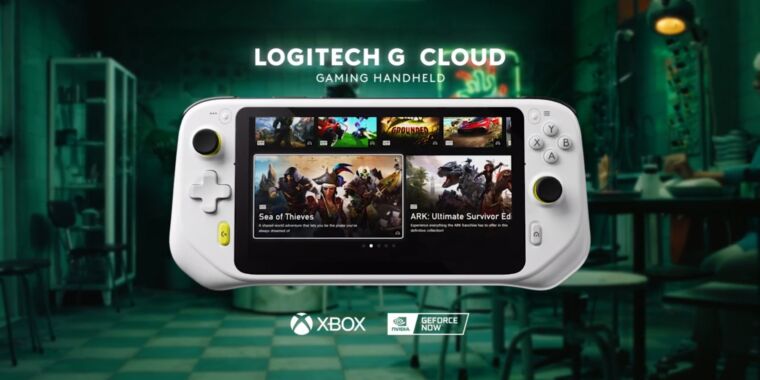 Is your local Wi-Fi infrastructure ready for a portable cloud gaming device?

Reactions: Gandalf_The_Grey, BryanB, Nevi and 4 others
You must log in or register to reply here.