Nvidia published a security bulletin on May 16, 2022 in which it informs customers about a new software security update for the Nvidia GPU display driver. The update patches security issues in earlier driver versions that can lead to "denial of service, information disclosure, or data tampering".

While it is common for companies to release security updates for their software applications and drivers, it is uncommon to receive updates for products that are not supported anymore.

In this particular case, Nvidia released security updates for Kepler-series graphics adapters that it no longer supports officially with Game Ready Drivers.

The company retired most products belonging to the GTX 600 and GTX 700 Kepler series in 2021. The first Kepler-based video cards were released in 2012 by Nvidia. The full list of

Retired products are still usable, but Nvidia won't release Game Ready drivers for these products anymore once they retire. Nvidia did promise to release security updates for the products until 2024 to address security issues in drivers.
Click to expand...

The updates can be downloaded from Nvidia's downloads website. All it takes is to use the drop down menus at the top to display available drivers for the selected product.

Nvidia released driver updates for most supported products as well. Nvidia Studio and Tesla R510 updates are
Click to expand... 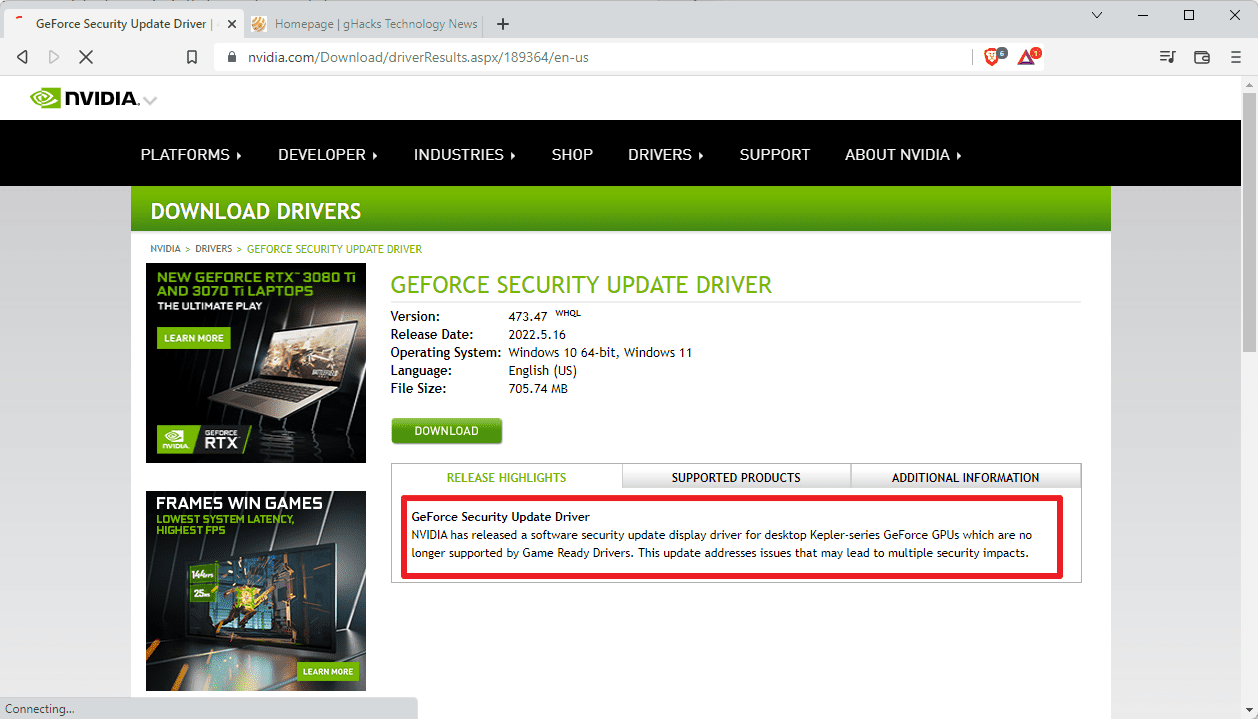 Nvidia published a security bulletin on May 16, 2022 in which it informs customers about a new software security update for the Nvidia GPU display driver.
www.ghacks.net
Reactions: Jack, RansomwareRemediation, geminis3 and 8 others

It seems NV has been busy with all its drivers. Grrr, I've been getting along just fine being two versions behind. But now, I'd better update.

edit: mods--I didn't think this rose to the occasion of having its own thread. But if consensus is that, pls. delete/move at your discretion.

re-edit: doesn't seem available for gtx series (yet). OK, I'll wait this one out. But for those with rtx, tesla and quadro models, pls. see if you need to update your driver.
Last edited: May 17, 2022
Reactions: Jack, silversurfer, RansomwareRemediation and 2 others
You must log in or register to reply here.