Opera GX is now available on the Microsoft Store

Opera browser made its Microsoft Store debut, alongside Yandex browser, when the new Store experience was announced by the Redmond Company in September. [...]
Now, Opera has put up its gaming-centric browser, Opera GX, on the Microsoft Store. The browser is available for both Windows 10 and 11. The app is free, and is about 106.2 MB to download, which is about the size of the offline installer of the 64-bit version of the program, that you can find on its website. Opening the About Opera page confirms that the app is indeed the 64-bit version, it matches the latest stable release build, Opera_GX_82.0.4227.44. 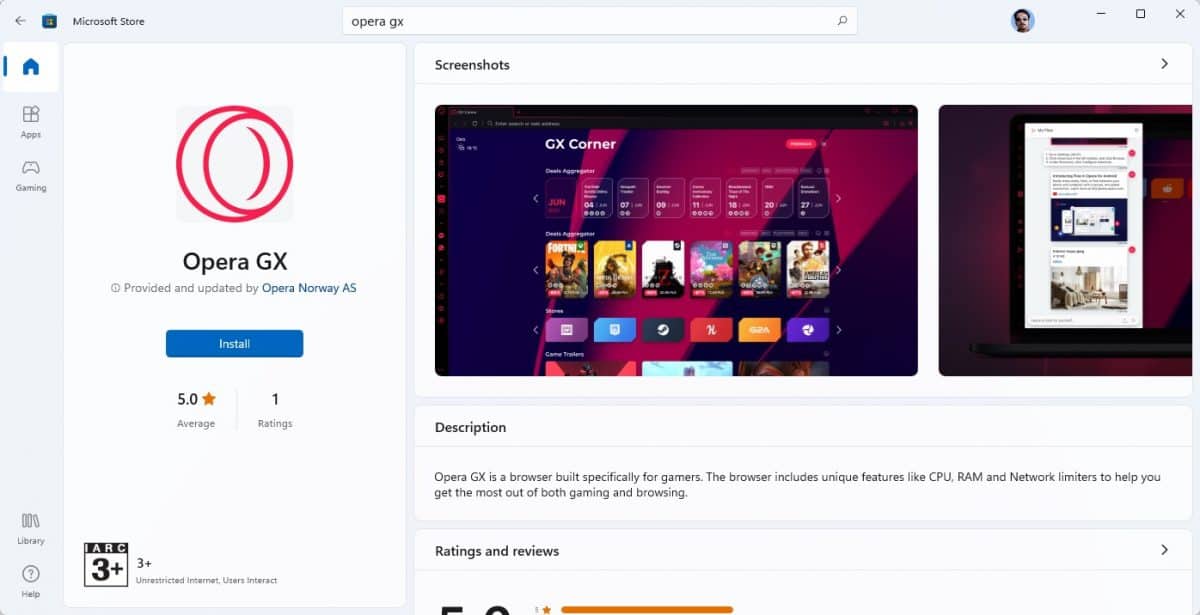 Want to download Opera GX on the Microsoft Store? Well, you will have to open the store app and search for the browser manually. I can't find the share button on the app's page, and even the announcement article on Opera's blog doesn't have a link to take you to the store listing. So, we can't provide you a direct link.

It seems a little odd, since all other apps have the share button at the bottom/top of the page. The web store's search makes it weirder. Here's what the store's results will show you when searching for Opera. The app doesn't pop up in the results, which can only mean it is hidden from browsers, i.e. the result is accessible exclusively from the Store app. And here's a similar search query for the term Firefox, which displays the proper result. The main Opera browser that was released 3 months ago doesn't have the share button or the direct link to the store listing either. It's not going to be a big deal for most users, but if you'd like to check the screenshots, or read the system requirements from your web browser, you can't do that. Thankfully, the Store's search function works correctly, which is saying something.

Until recently, the Microsoft Store had been displaying irrelevant results for keywords, notably for the term Firefox, which I highlighted above. The improvements that we have seen recently on the store app certainly make it more tolerable than the previous version, which was clunky at best. It's certainly interesting to see more desktop programs coming to the Store. We now have Amazon, Epic Games Store, WhatsApp Beta, to name some quality apps that were released recently. Now that Microsoft has opened up the store to support several frameworks, hopefully more developers will bring their creations to the platform.
Click to expand...

Opera GX has been released on the Microsoft Store. You can download the gaming browser on Windows 10 and 11.
www.ghacks.net
Reactions: Andy Ful, JoeBlack40, Deletedmessiah and 4 others

Meet GXC, the new gaming platform that lets you play and compete for weekly prize challenges directly in Opera GX