Use case
For personal use

Shared with
No one

Password manager
none--any breaches have been the fault of the respective companies.
2FA for utilities, MFA for banking in Sandboxie

Integrity of recovery plan
Recommendations based on others, but have not tested it.

I am partially satisfied. General feedback is greatly appreciated, to make improvements to my overall security / privacy.

My config for now. Had to refresh my static image to reflect Windows 10. May re-install 11 sometime but not anytime soon. It's more hassle-free that way.
Reactions: Guilhermesene, Deletedmessiah, Nevi and 14 others

Yes, it's there now or should be. It's set at default.
Reactions: Guilhermesene, Nevi, Gandalf_The_Grey and 7 others

Well, it turns out my Samsung 980 Pro MVM-e was more corrupted than originally thought--I'd rolled back to Windows 10 a while back as 1 GB of disk space was disappearing daily over a week's time and I couldn't find any of it. Then, earlier tonight, Windows 11 wouldn't install, not via the desktop nor with USB. It would restart as if to install but the next thing you know, it's back on the Windows 10 desktop without any error message or anything. After trying repeatedly, I finally installed my backup drive--a 970 EVO Plus (250 GB), Windows 11 popped up in Updates immediately and it went thru fine.

I think a partition was corrupted but you'd think trying to reformat with the USB would work. It did not. I will have to discard my 980 Pro--it's no use to try to reformat or anything; it will never be trustworthy. It had 3 firmware revisions--maybe that contributed, I don't know.

What a bummer. Did you try whether Samsung Disk Magician health status gave any clues? Sometimes when the disk has degrading units it helps to reserve 10% reserve space with Disk Magician.
Reactions: Venustus, SeriousHoax, silversurfer and 4 others

But Disk Management had said all partitions were "healthy." Very strange but I'm over it.
Reactions: Nevi, Venustus, silversurfer and 4 others
F

But Disk Management had said all partitions were "healthy." Very strange but I'm over it.
Click to expand...

Sorry, something lost in translation. I will try again. With empty I intended that Disk Magician does not format the whole disk but keeps a portion in reserve to use when solid state memory decreases. It is an option of Samsung Disk Magician. I looked it up and it is called " over provisioning" Reactions: Nevi, Venustus, plat and 3 others

No, actually nothing was lost in translation. I'm aware of over provisioning. I guess I was the one who wasn't very clear. I hinted at it when I said my disk "was already mostly empty also."

I would never enable over provisioning on a disk with 423/465 GB free when I yanked it. Not even on this smaller one with currently 206/232 free. Anyway, Windows 11 seems to be OK, and best of all, no mysterious disappearance of bits of disk space. Let me tell you, I wouldn't wish this disk nightmare on anyone. But luckily, it didn't fail me, it just couldn't update.
Reactions: Nevi, upnorth, Venustus and 5 others 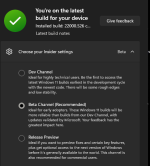 Reactions: Nevi, Deletedmessiah, Venustus and 8 others

Changed my mind, bought another 980 Pro nvm-e and installed Windows 10 because I want to check if some rather severe stuttering issues I had with a certain game in Windows 11 are still present.

I only speak for myself but I'm spoiled for performance. The 970 EVO Plus is a nice nvm-e but it's very small and a back-up for a reason. The new one is very fast and I hope the issues I had with the prev. don't pop up again. Then again, I got one of the first ones out on the market and subsequent firmware updates likely took their toll.

Don't know if Edge is going to stay on here but for right now, it's pretty good. Will update as things evolve.

Edit: update--the stuttering was most definitely confined to Windows 11. Anyone playing on a Unity platform having this problem? There are some guides online that have you making registry edits and these were only partially successful. Turning off anti-aliasing didn't work either. Only Windows 10 made the game run flawlessly as it should. Oh well.
Last edited: Mar 2, 2022
Reactions: Nevi, Kongo, Deletedmessiah and 7 others

plat1098 said:
Anyone playing on a Unity platform having this problem?
Click to expand...

I'm playing one at the moment, (Disco Elysium) but it's not a very hardware demanding (CPU/GPU) game. So, unable to reproduce.
Reactions: Nevi, Kongo, Gandalf_The_Grey and 5 others

Hey, everyone. I added VoodooShield v. 7.06 to my Windows 11 Insiders build on my alternate drive. Now then--it's been a while--since v. 3.xx. All settings are at Default (Auto Pilot--Aggressive) and Whitelist Cloud is off. So far, no system impacts that I can tell.

Is this the configuration most are using--Default? Do you think it's wise to disable VS if Windows 11 is updating? Note, this is Insiders Beta and you get a new build, complete with a Windows.old folder. It just updated today to v. 22610.1 but VS wasn't installed at the time.

Smart is the default/recommended mode by @danb
But I find AutoPilot Mode more practical when you use a webbrowser all the time.
Discussed this with Dan a while back, but we agreed to disagree
Running the latest version 7.07 in AutoPilot Mode (Aggressive) and with WhitelistCloud enabled.

It's best to disable VS on a full insider's beta Windows 11 update to avoid any issues.
There is no need to do this with normal Windows updates, but better safe than sorry...
Last edited: May 4, 2022
Reactions: Nevi, silversurfer, harlan4096 and 1 other person

Evaluating JShelter extension for Firefox. I do online shopping (OK, window shopping mostly) and there are hints here and there of tracking that make things a little uncomfortable. Let's see how it goes. Anyone else currently using it? If so, pls feel free to drop a note or two.

Example of a page on Amazon site: 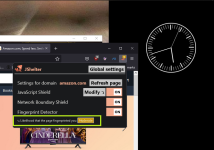 Reactions: anirbandutta01, harlan4096, Nevi and 6 others

Plat1098, I just started using it. Only had a problem on DailyMotion. There I had to change the Javascipt Shield setting or it wouldn't start the video. Oddly after I started playing it and changed it back the other old show videos I found there worked fine. Otherwise I haven't had to mess with it at all. Boy DM's site design is horrible.
Reactions: anirbandutta01, Nevi, Moonhorse and 1 other person

OK, seeing as I'm doing more online financials, I've decided to invest in a supporter's certificate for a security-hardened sandbox. Done and dusted. The developer is offering a Black Friday discount of 15%--good until November 28, 2022. So, now is the time to snap it up!

Hopefully it will be OK to post this over here in the dedicated SBIE threads. @bjm_

I was tolled that there is this custom called Black Friday apparently with discounts and alike, so lets participate... with the code bfriday22 you can...

edited to remove snip Was getting very messy with all the strike-outs.
Last edited: Nov 24, 2022
Reactions: mkoundo, BryanB, Moonhorse and 2 others
Z

Not defending him too much but the free version is respectable and the Plus UI has seen a lot of improvements.

The extra hardening features are paid--and to say with some truth, I'm still working out a few buggy things with Firefox due to these. I was not surprised when he brought out this business model. He put a lot of work and effort into it from day 1 and is trying to expand his user base with his other software (Private Win10, etc). It's been kind of slow to catch on, looks like.
Reactions: mkoundo and harlan4096

Nice setup. I will check out Trace thank you!