The first stable beta of AdGuard VPN for Windows

Releasing the first beta of AdGuard VPN for Windows

Meet the open beta of AdGuard VPN for Windows. Four months after releasing the alpha we're ready to present a more stable version.

"Meet the open beta of AdGuard VPN for Windows. Four months after releasing the alpha we're ready to present a more stable version." 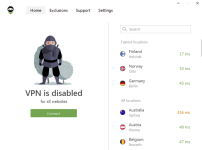 "Inviting users to test the just released alpha version, we couldn't have imagined that we would get so much feedback. Thank you a lot! Based on your comments, we've made many fixes and closed over 150 tasks before releasing this beta. Let's see what strengths AdGuard VPN for Windows has to offer.

Let's recap why you need it. If you often connect to public Wi-Fi networks in shopping malls, cafes, subways or airports, chances are that VPN will suddenly drop and the connection will become insecure. With Kill Switch, you can be confident that you are safe: if for whatever reason your VPN connection is interrupted, Kill Switch will automatically disconnect your Internet connection, keeping anyone else from accessing your data.
This makes the user confident that even if something goes wrong with AdGuard, their personal data will be okay.

Another new feature in the beta version is tunneling exclusions. This means that now you can exclude an application or an entire subnet from the VPN tunnel if necessary.

During alpha testing, we encountered some minor problems with AdGuard VPN and AdGuard ad blocker apps working together. But we've dealt with them and now our VPN is fully compatible with the ad blocker. Try it and see for yourself!

We've polished UI until everything shines, and now the interface is smoother, more responsive and it looks nice. Not only the apps should be functional, but also pleasing to the eye, shouldn't they?
In addition to the visual interface, all functionality is also presented in the tray. There you can connect or disconnect VPN, change the location, add a website to the list of exclusions etc."
Reactions: CyberTech, Venustus, roger_m and 7 others

Just got this in my email, I think I'll give it a spin.
Reactions: Venustus and Stopspying