Alexhousek said:
I asked on a different forum, but I'll ask here as well. I just looked on the Voodooshield website and could not locate the answer there. Does a VS Pro license work on only 1 PC or can you use it on multiple PC's assuming you own several PC's?
Click to expand...

Yeah, Trooper is right, it is one license per computer.
Reactions: Correlate, Sorrento, Asterixpl and 3 others

We have released the new version of VS to the public and have updated the website.

Reactions: Correlate, Sorrento, blueblackwow65 and 7 others

I still have the free version VS 7.06. I'm not updating for the time being
Reactions: Correlate and Sorrento

Courtesy of danb
I am using the Pro version
Reactions: Correlate, Sorrento, Nevi and 3 others

A couple users reported an error in VS’s registration / trial when the computer booted and there was not yet an internet connection. This version fixes this issue in a couple of ways, and also does not check the registration until 3 minutes after VS has started. If anyone had this issue, please try this version and let me know if it is fixed for you or not.

And now Voodooshield 7.10 is out now

With best Regards
Mops21
Reactions: Correlate, Sorrento, Nevi and 5 others

Thanks @Mops21
Sent a mail to @danb asking for a changelog.
Reactions: Correlate, Sorrento, Nevi and 4 others

Gandalf_The_Grey said:
Thanks @Mops21
Sent a mail to @danb asking for a changelog.
Click to expand...

An answer from @danb :

Besides the registration fix, there were a few insignificant WLC changes, but other than that it is the same as 7.09.

I was going to email the beta test group at some point, but I didn’t want to keep spamming their inbox .

@danb
Could you please consider to add the ability to auto-check on VT when a new popup appears and show the result in the popup?

This feature could be added as well as an aditional step in the rules section, for example.
If AI score < 10 then ok
If 20 > AI score >10 then check on VT
If AI score > 20 then bad

For this maybe each user should use its public API key which gives 4 queries per minute which is more than enough for this use case.

@danb VS 7.10, Autopilot Aggressive. Happens after every reboot (atleast as long as I click block is my guess). 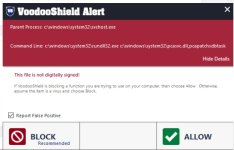 Reactions: Correlate, Nevi, Sorrento and 1 other person
B

Freki123 said:
@danb VS 7.10, Autopilot Aggressive. Happens after every reboot (atleast as long as I click block is my guess).
View attachment 266969
Click to expand...

I just allowed this file as it is part of windows and the problem went away.
Reactions: Correlate, Nevi, Sorrento and 3 others
F

blueblackwow65 said:
I just allowed this file as it is part of windows and the problem went away.
Click to expand...

Thanks for the information
If I'm using software with a very small userbase I understand prompts but for stuff that's "part of windows" I hope for less (no) prompts to be honest.
Reactions: Correlate, Nevi, Sorrento and 1 other person

Here is the latest version of VS.

There was a conflict between Microsoft Edge's Startup boost (Settings / System and Performance tab) and VS, but the issue is now resolved.

The cool thing is that VS's multithreading is a lot quicker and robust now.

A couple other optimizations are included as well.

I am going to wait a little while before releasing this version to the public, but it should be stable, and you can install over the top.

BTW, I will catch up on all of the posts I missed asap.

Have a great weekend!

Sorry about that, I will have it fixed this weekend.

Here is the latest version of VS. It should be completely stable, but please keep in mind there were a lot of changes under the hood, so if you notice anything that is not quite right, please let me know.

I really will catch up on the posts asap, sorry for the delay.

VS 7.10 here. I did a rightclick and "VS Scan" on the drivers for my keyboard before install. Two mins later still no result so I checked them with VT (clean).
Then I wanted to install them with VS on Autopilot/Agressive. During the install I got two prompts for other exes which both VS couldn't decide on also within two mins each (no VS or WLC results within two mins). So I used VT again both times. So for all three exes I had to use VT since VS couldn't decide at all.
Logitech Gaming Software (driver download)
Since it is a signed driver from logitech I had expected VS wouldn't give me a "blank result" time installing. Internet had to be working because VT worked.
Reactions: Correlate

Just a quick note… we just released 7.12 to the public.

We also just finished upgrading the WLC servers, so they should a lot faster now.

Have a great weekend!

Reactions: Correlate, show-Zi, Nevi and 6 others

Here is the latest version of VS, it should be perfectly stable.

When testing Follina, I discovered a bug in VS’s command lines when I did a repair install of Office 2013. It had nothing to do with Follina, but it was a very odd bug that had never been reported before. Basically, VS was unable to parse one of the command lines of the Office 2013 repair, so it created an exception. Anyway, that is fixed now, and I am assuming that if anyone had any issues with command lines in the last couple of years, that the issue is fixed now.

The Follina tests went great, and VS properly blocked the exploit with its Antimalware Contextual Engine / Anti-Exploit mechanism (as opposed to blocking the command line). It is okay to block exploits via suspicious command lines, but the only problem is that if there is not a rule for a certain suspicious command line, then there will be a bypass. This is why we prefer blocking by the Anti-Exploit mechanism, you are pretty much 100% certain it is going to block the attack.

But I did find two optimizations that I implemented in 7.13. First, when VS was OFF, it did not block Follina. This could go either way, simply because when the user downloads the exploit, they will either be running a web browser or email client. But just to be sure, VS now blocks exploits when it is OFF. And actually, before the Antimalware Contextual Engine, VS did block potential exploits even when it was OFF. I just never got around to implementing the potential exploit feature into the Antimalware Contextual Engine. The other change I made is that now when VS blocks a potential exploit, it will show the appropriate user prompt that does not provide VoodooAi or WhitelistCloud verdicts. Again, this is how VS used to work as well, and the reason we do not want to provide VoodooAi or WhitelistCloud verdicts is, for example, if VS blocks calc.exe via a potential exploit, then the VoodooAi or WhitelistCloud verdicts will both be Safe, making the user think that it is okay to allow.

There were a few other small optimizations as well.

Code:
Is this okay, to allow ?
Reactions: Correlate and harlan4096

Gandalf_The_Grey said:
Had a command line block with VS 7.13:

Answer from @danb by mail:

Yeah, that is okay to allow, I will have to fix that.
Click to expand...

Reactions: Correlate, Nevi, show-Zi and 2 others

Cybercrime Ransomware vs. AI: The Battle Between Machines