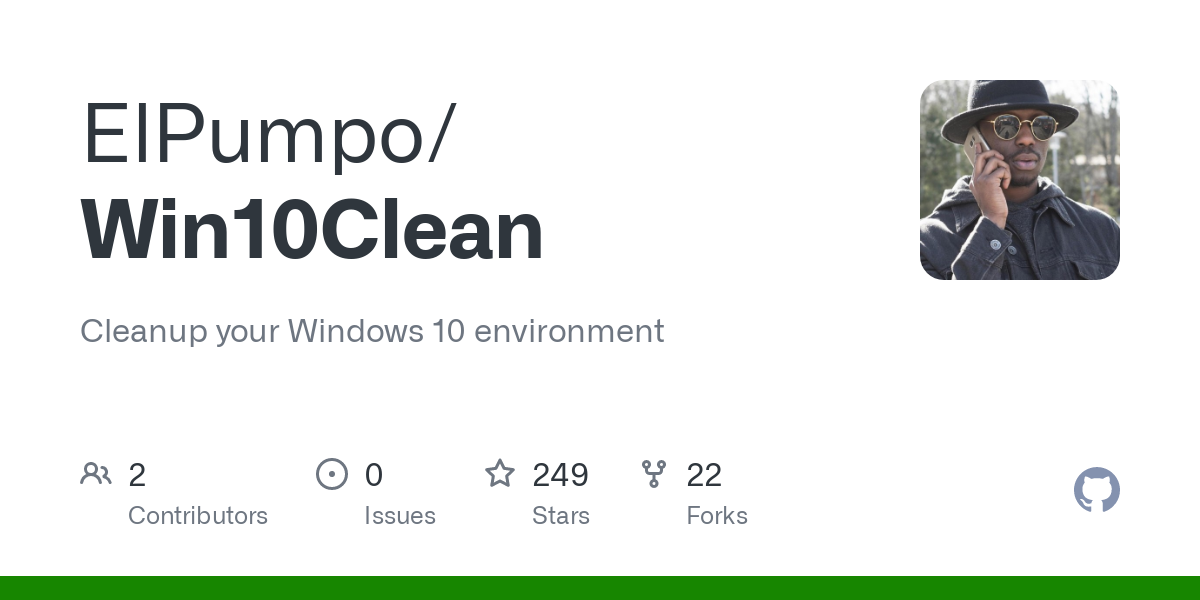 Cleanup your Windows 10 environment. Contribute to ElPumpo/Win10Clean development by creating an account on GitHub.

ElPumpo released this yesterday · 1 commit to master since this release

Today is a big day for Win10Clean, which is just a normal day for y'all. It's being released as v1.0.0. Some new minor changes are here but it's still what I wanted it to be, and nothing more really.
It wasn't ever meant to be known by anyone except me. Released it back in 2016 just so I could easily find it on the interwebs. I'm suprised how it was shared like it was on ghacks and majorgeeks. It wasn't ever designed to be customizable, and wont be either. Microsoft haven't changed so much the last couple of years and I'm satisfied on how my installation is so I probably wont release more updates unless things change.

Win10Clean – is a quick and easy way to apply (and save) the most common tweaks to Windows 10. Win10Clean has a lot of the features commonly found in “Windows 10 spying” programs. However, that isn’t the goal. It also does not change registry keys that make restoring your changes difficult. This way you can always revert your changes effortlessly.

The interface is straightforward with gray and white and nothing fancy to look at, yet simple to use. This is probably because the author originally designed as a personal app to save all his Windows 10 tweaks in one location. In other words, he took all his scripts and put them in a program that was portable and made it available to everyone.

The majority of what you’re looking for is under two of the four tabs. These are Home and Win 10 / Metro Apps. Under home you can disable Defender, revert Explorer to Windows 7 style, disable Homegroup, Don’t’ reinstall uninstalled apps, disable start menu ads, uninstall OneDrive, disable GameDVR, and clean up the context menu.
Reactions: Cortex, Nevi, tipo and 2 others
You must log in or register to reply here.