Verified
Staff member
What do paranoid Windows users do, disable your AV and scared to get infected? 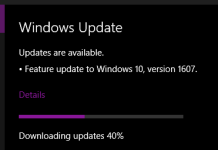 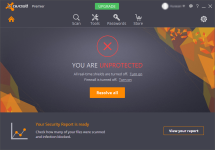 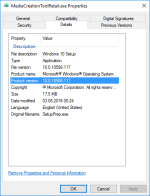 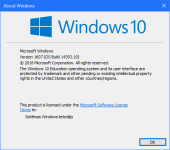 Verified
Thanks for posting, but i'll wait a bit!

Got my system updated through MCT without any issues whatsoever. So far, loving the AU.

Verified
So far so good? No explosions and PC booted ok << i'm happy!

Verified
Gonna wait a bit... was late in getting it anyway!!

Verified
Malware Tester
It's running great for me, really happy with it.

Verified
Trusted
AU update installed fine here without any problems. I've been messing around with ZoneAlarm Extreme Security alongside ZAL (the beta where both AM and AL are combined) and they didn't cause any problems. ZoneAlarm itself (like many others) had support for the AU update before it was officially released for the general public - although ZoneAlarm seems to have updated to that version after AU was installed.

Some of the features I noticed immediately like improved sticky note (which I use heavily), a slight redesign of the start menu to include things like power menu (shutdown, restart, etc for ease of use), and the settings menu have a dark theme that you can toggle on/off in personalization under Color tab.

My only annoyance is that they reinstalled those apps like 3D Builder. I really wish they would stop doing that. Will probably do a fresh install with updated ISO in a few days or sooner if I encounter any problems.
A

Verified
Content Creator
I wanted to update. But it still doesn't show on Windows Update. So, I guess I'll get it tomorrow if it's available.

OokamiCreed said:
Some of the features I noticed immediately like improved sticky note (which I use heavily)
Click to expand...

Did the AU carry over existing sticky notes?

I'm running the Windows Update. Everything running a-ok. Like Umbra I only run Windows Defender,no problem there running smooth. I noticed WD now has icon in the system tray now. I also have Malwarebytes Premium,Voodooshield pro, and Malwarebytes Anti Exploit Premium, all running great together.

Huracan said:
Did the AU carry over existing sticky notes?
Click to expand...

That I couldn't tell you. I don't keep them up for more than a few hours however I use them for reminders almost every day. At the time of upgrade I did not have a sticky note up.

viktik said:
you can download the windows 10 ISO image file from here

By the Way , Dear members ,

HOW COME you dare to do such an important upgrade of your system with your AV installed , are you serious !!!!

For those who did it , you deserve :

A
Windows 10 Microsoft Confirms Windows 10 Anniversary Update Launches in July
May 16, 2016
Alkajak
A