Windows 10 cumulative update KB3194798 is failing to install for some users, but on the other hand, a number of those who actually manage to deploy it successfully are reporting a different bug.

Disk Cleanup is reporting a disk size of 3.99 TB after installing this cumulative update and users are claiming that this is happening no matter how much storage they have on their computers.

“Disk Cleanup listed the size of the Windows Update files that could be deleted as 3.99 TB, yes terabytes! What was shocking was the fact that I only have a 250 GB SSD drive on my laptop, one PC has a 256 GB SSD main drive and a 2 TB secondary, and the third has a 500 GB SSD with a 2 TB secondary drive,” one user explained on Microsoft’s Community forums.

In most of the cases, cleaning the disk still works correctly, although some are complaining that it still takes too long to complete. The process indeed seems to be rather slow after installing this cumulative update, but other than the incorrect data size, no issue appears to be caused to Disk Cleanup.

Installation issues
Microsoft hasn’t yet acknowledged the bug, and a workaround is not yet available, but the company is very unlikely to fix the problem too fast since it doesn’t cause anything beside the incorrect data size in Disk Cleanup.

On the other hand, Microsoft must look into reports of cumulative update KB3194798 failing to install, as there are plenty of users complaining that they can’t deploy the patch on their computers, no matter if they go for the automated solution via Windows Update or manual downloads.

This isn’t entirely something new, and Windows 10 cumulative updates have caused issues for quite some time, so hopefully Microsoft releases a fix that would address all problems, including the incorrect data size in Disk Cleanup.

Yeah another good one Microsoft, been seeing this on lots of sites today. Only a 5.02mb clean up here though.
Last edited: Oct 13, 2016

Verified
Trusted
Just checked it and yes there is 3.99 TB.
I have an SSD which is only has 120 GB.
Does this mean that Microsoft owe's me 3.79 TB? hahahahaha 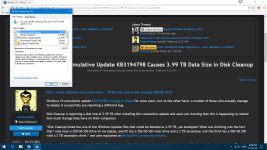