Smart App Control is a new security feature that is designed to improve protection against untrusted applications.

Microsoft describes the feature in the following way: 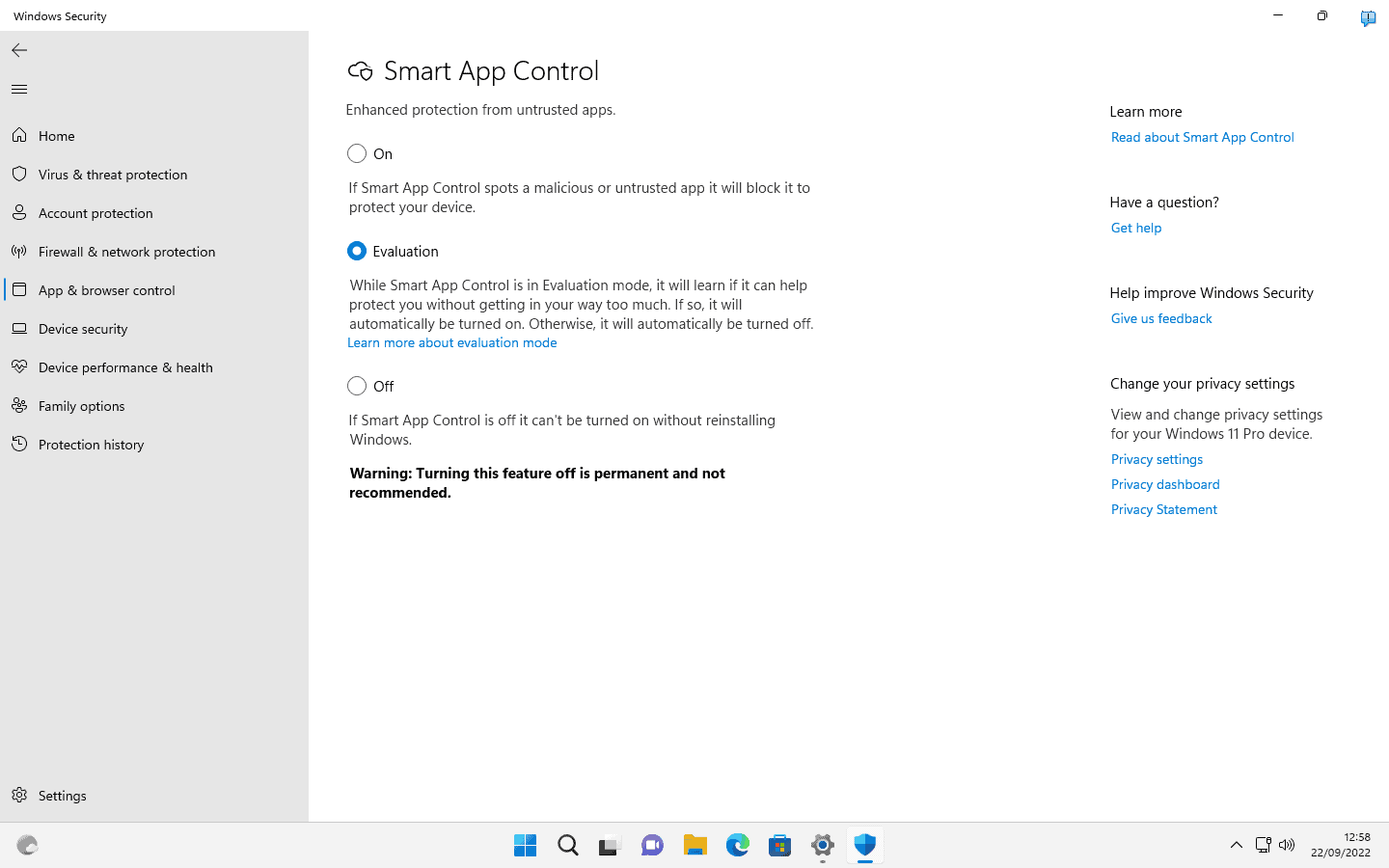 Broken down to its core, Smart App Control blocks the execution of certain file types downloaded from the Internet and untrusted applications. It is a cloud-powered security service according to Microsoft. When Smart App Control determines that the app is safe,

Here is an overview of the different scan results of the security feature:

There is currently no option to allow the execution of an app that Smart App Control blocked on the system.

Smart App Control may be turned off by system administrators, but the turning off is permanent. There is no option to enable the security feature again after it has been turned off on the running system. The only available options, according to Microsoft, are to reset the PC or to clean install Windows 11.

Additionally, Smart App Control is only available on new Windows 11 2022 Update installations. Upgraded devices won't get the feature. A likely reason for that is that the feature may interfere with applications and files that are already on the Windows PC. 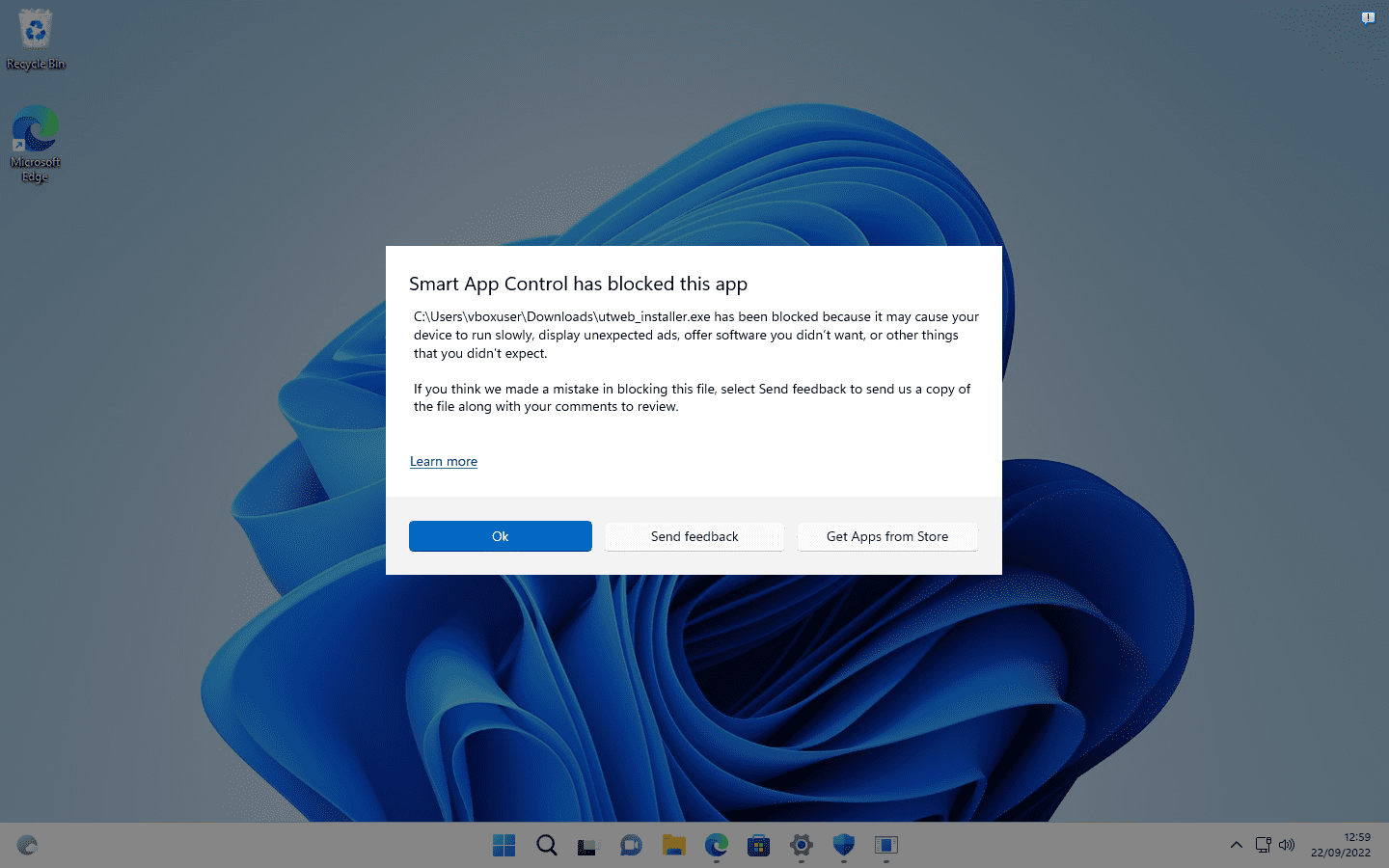 Enhanced phishing protection is a new security feature that is integrated into the Windows 11 2022 Update. Windows 11 detects automatically when users enter the Windows account password into applications or websites, and checks whether the app or website has a secure trusted connection.

If that is not the case, Windows 11 informs users about the potential danger- Enhanced phishing protection works with Microsoft Account, Active Directory, Azure Active Directory and local passwords, any Chromium-based browser and applications. 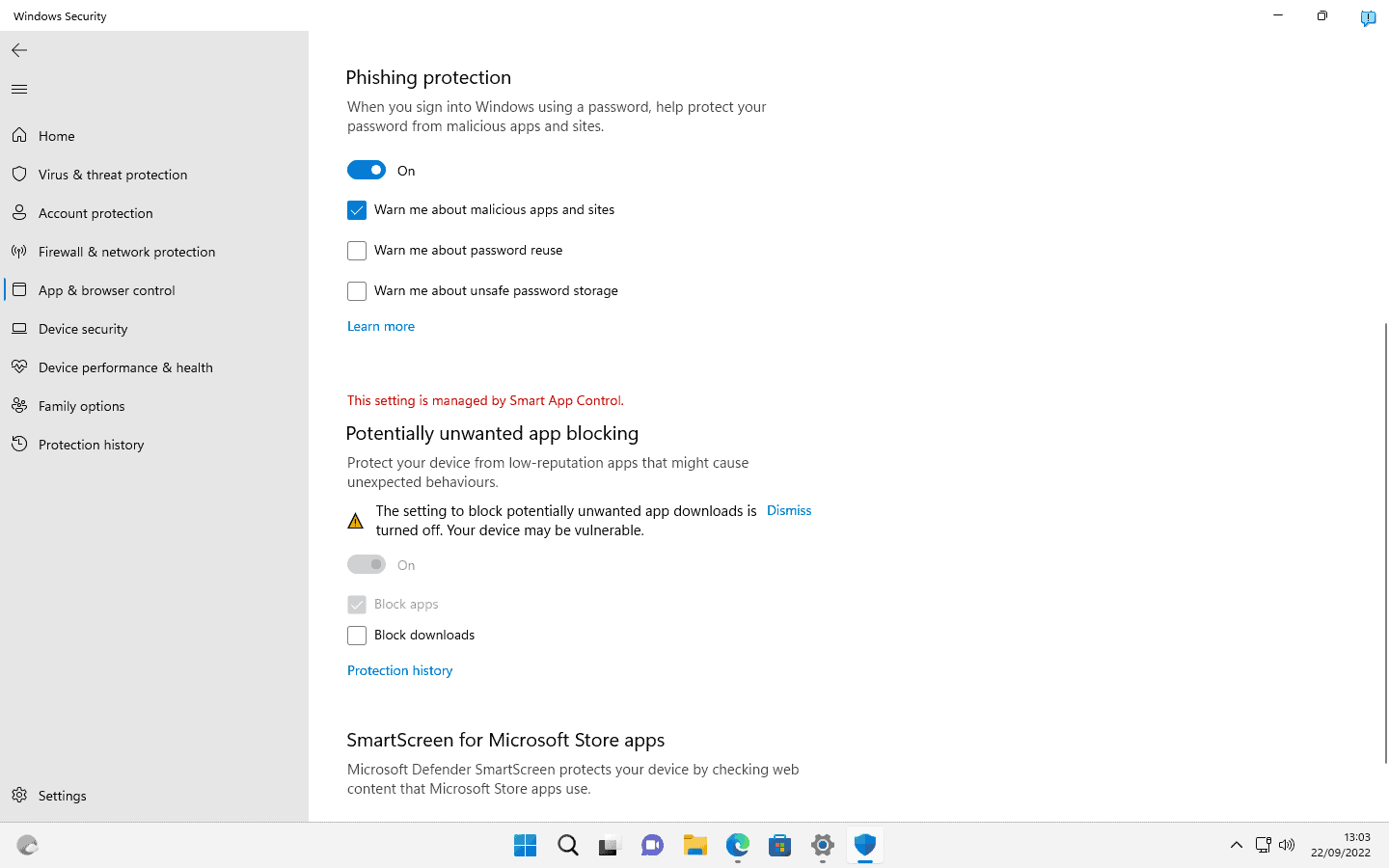 The feature is part of SmartScreen.

Windows 11 administrators may configure it on the following way:
Additional information about the feature, including Enterprise policy options, is available on Microsoft's Tech Community website.
Click to expand...

At its core, it ensures that only validated code may be executed in kernel mode. It achieves this by running kernel mode code integrity "inside the secure VBS environment instead of the main Windows kernel".

It protects against attacks that rely "on the ability to inject malicious code into the kernel" of the Windows operating system.

Credential Guard
Credential Guard is enabled on Windows 11 Enterprise systems. Microsoft notes that the feature increase protections from vulnerabilities "greatly" and that it prevents "the use of malicious exploits that attempt to defeat protections".
Click to expand...

Here is an overview of security improvements and new security features of the Windows 11 2022 Update.
www.ghacks.net
Reactions: Nevi, Sorrento, Venustus and 11 others

I didn't know this option existed till now. I forced the update yesterday through mounting the ISO, by downloading it from the official Microsoft webpage. The option was turned off for me by default, probably because I upgraded to Windows 11 from Windows 10 when it first became available. Bugged or never got activated?

However, according to Microsoft (source) that can only be reverted by doing a clean reinstallation. Which is too much trouble for me at this moment.

That is the only way for those in the same situation as myself, currently.
Reactions: Idanox, Nevi, Sorrento and 5 others

If you read this:

I am curious how it will work in practice.:) https://www.windowslatest.com/2022/03/05/windows-11-22h2-feature-promises-significant-protection-from-malware/amp/ It will probably use Microsoft ISG, so many false positives are expected. Anyway, it can be some solutions for children and happy...

malwaretips.com
I wouldn't bother with Smart App Control at the moment.
Reactions: Idanox, Nevi, Sorrento and 10 others

In some cases even after clean install Windows 11, it's possible that Smart App Control remains turned off automatically by Microsoft, for this reason:

Essentially, we're looking to see if Smart App Control is going to get in your way too often. There are some legitimate tasks that some corporate users, developers, or others may do regularly that may not be a great experience with Smart App Control running. If we detect during evaluation mode that you're one of those users, we'll automatically turn Smart App Control off so you can work with fewer interruptions.
Click to expand...

Windows 11 22H2 was just released, and with it comes a new security feature called Enhanced Phishing Protection that warns users when they enter their Windows password in insecure applications or on websites.

Windows login credentials are valuable to threat actors as they allow them to access internal corporate networks for data theft or ransomware attacks.

These passwords are commonly acquired through phishing attacks or by users saving their passwords in insecure applications, such as word processors, text editors, and spreadsheets.

In some cases, simply typing your password in a phishing login form, and not submitting them, is enough for them to be stolen by threat actors.

To combat this behavior, Microsoft introduced a new feature called 'Enhanced Phishing Protection' that warns users when they enter their Windows password on a website or enter it into an insecure application.
Click to expand...

Windows 11 now warns when typing your password in Notepad, websites

Windows 11 22H2 was just released, and with it comes a new security feature called Enhanced Phishing Protection that warns users when they enter their Windows password in insecure applications or on websites.

It's "Unsafe to store a password in Notepad", but safe enough to let your Clipboard history sync to the cloud which may contain sensitive data.

How to Turn On or Off Clipboard Sync in Windows 11