Successful malware attacks may make modifications to the systems, usually to decrease the chance of detection or removal of malicious processes. Even after a successful cleaning, effects of the malware attack may still limit access to certain features and tools on the operating system.

While it is often better to reinstall the operating system from scratch, or using a backup, some users prefer to remove the malware from the running system and deal with the fallout of that without doing so.

Windows Malware Effects Remediation Tool is an open source program that assists administrators in restoring functionality. It is as simple a tool as it gets: run the application, click on some buttons and you are done.

As far as system requirements are concerned. The program runs best on Windows 10 and above according to the developer, but it should also work on Windows 7, 8.0 and 8.1. The app requires the Microsoft .NET Framework 4.7.2 or later, and runs on 32-bit and 64-bit versions of Windows.

Note: Windows SmartScreen may display a warning page when you run the program. It throws these windows when new programs are launched, among other things. Five of Virustotal's antivirus engines detected a threat, but mostly lesser know engines, with the exception of Sophos.

Windows Malware Effects Remediation Tool supports an automatic repair feature that checks for any of the issues to reset them automatically.

The menus at the top list several additional options. You find options to launch the Registry Editor, the Task Manager, or an elevated command prompt under File, and options to run the program with elevated or system rights under Run.
Click to expand...

Here are the features that the tool supports:
Each reset option is available individually in the program interface. 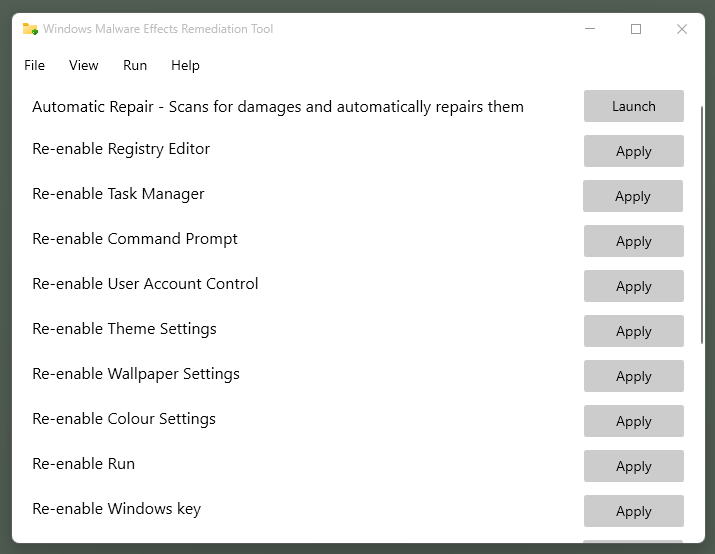 Windows Malware Effects Remediation Tool is a useful open source tool for Windows. While its main purpose is the remediation of malware effects on Windows devices, it may come in handy for other use cases to restore functionality.
Click to expand...

Other Security for Windows May 15, 2022
ticklemefeet
T