Tomorrow, Apple will start providing repair manuals, parts, and tools for US customers to repair their own M1-based MacBook Air and MacBook Pro laptops. M2-based Macs will not be supported at that time, but Apple said the program will extend to more Mac models "later this year."

Apple launched its Self Service Repair Store in April with repair manuals and the option to order tools and parts for the iPhone 12 series, iPhone 13 lineup, and latest iPhone SE.

As of tomorrow, the store will offer the same services to M1 MacBook Air and Pro owners, including the same parts made available to Apple Stores and authorized repair providers, according to Apple's announcement.

"Self Service Repair for MacBook Air and MacBook Pro offers more than a dozen different repair types for each model, including the display, top case with battery, and trackpad, with more to come," Apple said.

In addition to selling MacBook parts and repair tools, Apple's repair store will also let customers rent repair kits for a week for $49.

Additionally, Apple will accept unwanted parts from M1 MacBooks for refurbishment and recycling, and customers will receive credit "in many cases," the tech giant said.

Today, Apple also reiterated its promise to expand the iPhone self-service repair program to customers in Europe later this year, with other geographies to follow.
Click to expand... 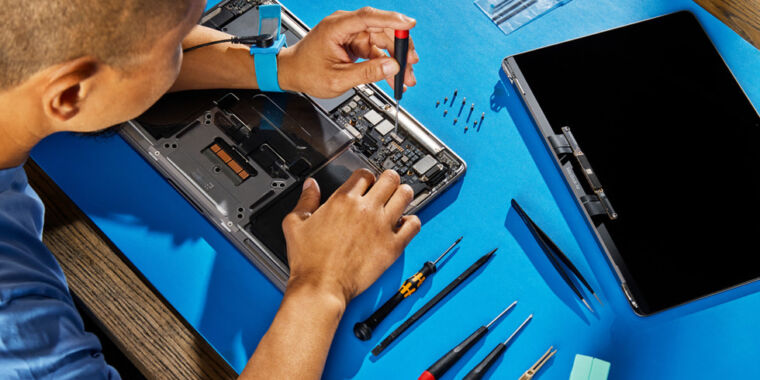 Apple will sell and rent parts and tools for M1 Mac laptop repairs.

arstechnica.com
Reactions: Gandalf_The_Grey, harlan4096 and upnorth
You must log in or register to reply here.

Apple's Self Service Repair Store is now available in the US