we are happy to announce new version of AVAST Antivirus (build number 12.2.2276). This is a second release of the NITRO Update.
It's for these products: Free Antivirus, Pro Antivirus, Internet Security and Premier.
In this release, we finished some long-going internal projects (e.g. improvements in the licensing system and registration to the Windows Security Center) and fixed many bugs.
We stopped using the year in product name, as we will be releasing new versions in monthly cycles.

We hope you enjoy the new version!
AVAST Team
Click to expand...

The new Components menu in program Settings - an easier way to control which components are installed and running-This going to be helped alot of users and CC got some new option/Improvments.Thanks.@BoraMurdar
Reactions: Deleted Member 3a5v73x, King Alpha, Logethica and 3 others

The issue with the UI (opens randomly) is still present, the Definitions auto updates and Program version are unchecked by default. The Always block suspicious files from Cyber Capture doesn't work that well.

This is a small feedback after testing a few hours in Windows 7 (64Bit) using VirtualBox on Ubuntu 16.04.1 LTS (64Bit)
Reactions: King Alpha, Logethica, Captain Awesome and 1 other person

NullByte said:
The issue with the UI (opens randomly) is still present, the Definitions auto updates and Program version are unchecked by default. The Always block suspicious files from Cyber Capture doesn't work that well.

Do you used new unknown samples for the test?@NullByte
Reactions: Deleted Member 3a5v73x and Logethica
N

Yes, I right click scanned and deleted every file that was detected, after that I started executing and the verdict came Clean (3 files form a 1473 samples, the files are 1-2 days old).

It also checked 7Zip at the beginning,the verdict was clean (it's wierd that 7Zip was flagged as unknown).
Reactions: Logethica and Captain Awesome
S

Running the latest version..and all seems to be working ok...
Regarding CyberCapture...

From: cybercapture-protection-against-zero-second-attacks
"In a nutshell, CyberCapture is a cloud-based smart file scanner. Rather than relying on the latest definition updates, CyberCapture isolates suspicious files in a safe environment and automatically establishes a two-way communication channel with the Avast Threat Labs for immediate analysis. This allows us to clear away all the false code, misdirection, and other stuff malware creators use to mask malware’s true intentions. By peeling away layers of obfuscated code in the cleanroom environment of our cloud, CyberCapture is able to fully dissect the file and observe the binary level commands inside the malware and fully understand the instructions hidden there.

CyberCapture evolved from our DeepScreen technology, which used to analyze unknown files locally, in a virtualized “sandbox” environment. DeepScreen had two major problems, though. First, it relied on the NG virtualization component, which wasn’t compatible with all systems (it required certain settings to be enabled in the system BIOS etc.). And second, it allowed the suspicious file to run in the sandbox for only a very short time (typically 10-15 seconds), dramatically reducing the precision of the decision-making algorithm. By moving the technology to the Cloud, and taking all the time needed to properly analyze the file, we are now adding an additional layer of protection that will be extremely difficult for attackers to beat.

While developing CyberCapture, we put a great deal of effort into shortening the time between malware discovery and the deployment of a detection. We moved the technology to the cloud, so that we can leverage all of our heavy weapons to analyze samples in a controlled environment. Additionally, running our powerful detection engines on our backend means the cybercriminals have to touch our cloud to test our products abilities, which not only makes their lives harder, but also lets us see them.

Typically, the automated analysis will need up to two hours to make a reliable decision about the file. In certain cases, it will not be possible for our engines to make that decision, which is where our experienced analysts will step in to manually analyze the file. During that time, the file is still contained in the “capture” and hence cannot cause any harm. Once the analysis is complete, the user is notified about the result and the file is either quarantined or released from the capture and allowed to run.

CyberCapture is a new system and will take a bit of time to become fully tuned and productive. Because of the nature of its operations, CyberCapture continually gathers intelligence on new viruses. This means it will organically improve as it is used and, therefore, it will continue to iterate increased performance."
Reactions: Deleted Member 3a5v73x, Viking, silversurfer and 1 other person
S

Be aware of these changes

After reboot, Chrome notified me of 2 new extensions wanting to activate - while this Chrome notification is normal, I did not previously have Browser Protection installed. 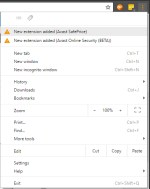 As you can clearly see the new changes made to the Avast Installer, Browser protection as been split into 2 offerings. 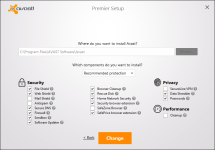 Avast should make it CLEAR to users what SafePrice is and what is does, and personally should remain OPTIONAL as it's focus is not security-based.
Last edited: Jul 31, 2016
Reactions: Logethica, ZeroDay, silversurfer and 1 other person