I got the itch to install a new Antivirus again. I've been doing good. I've been using Windows Defender for around 6 months now and recently added Zemana Antilogger. Six months is a record. However, I do believe either of these two offer greater protection and may run even lighter than WD on my 3 year old Asus notebook (8MB, Intel i5, 64 bit) with Windows 10 Anniversary Update installed. I ruled out AVG Free and Panda Free at this time. And I'm still uncertain about McAfee Free. Thanks.

Verified
I hesitate too

Verified
I personally have a lot of faith in Avast I have been using it with 10+ years and it hasn't failed me yet. That was before I even used the Avast Maximum Protection guide. https://malwaretips.com/threads/how...rity-2016-for-maximum-protection-guide.59880/ (Applies for the free version.)

Verified
Avast for sure

yeah, my vote goes to avast

Verified
Trusted
Content Creator
360 TSE is stronger than Avast at default settings.
But if you tweak Avast, it is better.
S

Both have their advantages and disadvantages, Qihoo has better detection rate, and if we changed Avast options to improve this same rate, will then have the same FPs that Qihoo.

So? both antivirus are free and they are really good. Test them, at the end is just my / our opinion and what matters here is your experience

Verified
I have used Avast for a very long time and " Touch wood" i have never had any issues!

Verified
Staff member
I would recommend trial runs of Qihoo 360 Total Security Essentials and Avast Free Antivirus to see what performs better for your machine.

As with any security solution, Unchecky.com can prevent toolbars and other unwanted software from installing.

Perform a custom install with Avast as you will not need all Shields or other Components (ex: Cleanup, SecureLine, Mail and SafePrice extension). If you don't like avast, they offer a removal tool to clear Avast from the system.

If this is the case and the programs updates are critical, then I reconsider the available options. I have seen first hand the Sponsored/Ads in 360 Total Security - and personally, I do not find it acceptable, therefore I would avoid recommending such product. @shmu26 When was 360 TSE last updated, versus that latest program update for 360 TS?


Trickster said:
I vote for avast free those annoying ads and banners in qihoo lately and those annoying pop ups from time to time Will start to agrivate you. Plus avast free has less , almost no false positives
Click to expand...

Increasing the sensitivity may cause slightly higher FP than default settings, as is the case with most products.

Avast Free and Paid does include some pop-ups about Offers for Avast Products, but can be turned off in Avast AV Pro and above. I have it enabled and don't really notice any promotional offers, except the occasionally monthly report. 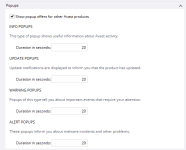 In Detection rates, no doubt Qihoo 360 have edge compare to Avast but very minimal on differential points.

But for major practicality then check the necessary features for you between Avast or Qihoo 360.

I suggest Avast as Qihoo has some reputation issues.

Verified
Trusted
Content Creator
Malware Hunter
I have not used Avast for quite some time, so I cannot tell much about it (RAM usage, protection,...), but did Qihoo 360 Total Security (from now on: QTS360). It used to have both great (cloud) signatures (therefore, stable internet connection needed, for offline use, you might want to use Bitdefender and Avira ones too, but they come only twice a day AFAIK, and Bitdefender signatures happened to not install always on time). QTS360 HIPS served me well most of the time, too.
Also, GUI of QTS360 is easy to understand and nicely done. You can change to various themes if you like.
There are some minor tweaks I'd suggest to take from the stock version.
QTS360 autoallows chinese PUP/PUA which I really dislike.
Apart from that, QTS360 did very well trough the time I was using it. Malware Vault tests in the past months weren't that good unfortunately, but that might just be an exception, every Antivirus software can fail at some point.
QTS360 is relatively lightweight.
You might want to read my QTS360 review: User Review - Qihoo Total Security 8.6.0.1158

Bottom line:
I'm not sure whether Avast autoupgrades to new programme versions, but Qihoo Total Security (Essentials) only offers upgrade to new versions if you trigger update manually (judging from last used v8.6.0.1158). This is annoying IMO and might put you to danger if something critcal is implemented in the new version.
Judging from @silversurfer 's tests in the Malware Vault, I'd suggest Avast (find something useful here: How to setup Avast Internet Security 2016 for Maximum Protection (Guide)).

Spawn said:
I would recommend trial runs of Qihoo 360 Total Security Essentials and Avast Free Antivirus to see what performs better for your machine.

As with any security solution, Unchecky.com can prevent toolbars and other unwanted software from installing.

Perform a custom install with Avast as you will not need all Shields or other Components (ex: Cleanup, SecureLine, Mail and SafePrice extension). If you don't like avast, they offer a removal tool to clear Avast from the system.
Click to expand...

Der.Reisende said:
I'm not sure whether Avast autoupgrades to new programme versions,
Click to expand...

It's configurable under Settings.

Avast... If configured will be great product. Quihoo dont have a good reputation.

Spawn said:
It's configurable under Settings.
Click to expand...

Thank you for letting me / us know, this is very useful!

I'm currently trialing 360 TSE. I like it so far. Nice GUI. changed the theme to my liking.) Settings are easy to understand. I have the Qihoo engine and Bitdefender engine enabled, may enable Avira later. My browsing is a tad faster than when Windows Defender was running. I had to use the registry fix download to disable WD (one disables WD, one re-enables it), it didn't do it automatically. Not sure it was Qihoo's fault. I had to use this before the anniversary update as well. Anyone else have this problem with WD? I'll try Avast next and report back.
You must log in or register to reply here.
Top