Verified
Developer
Microsoft today released the first cumulative update for the Windows 10 Anniversary Update since its release a week ago. KB3176495 brings the build number to 14393.51.

As with most cumulative updates, don't expect to see any new features. Instead, it focuses on fixes and improvements.

Here are the improvements in 10586.545:
There are very few consumers that are still running the original version of Windows 10, build 10240 - but there are a number of businesses using it.

Here's what's new in 10240.17071:
All of the PC builds mentioned above are available right now for everyone that's using the build that the number corresponds with. You can grab them by heading to Settings -> Update & security -> Windows Update -> Check for updates.
M

I believe Microsoft will start avoiding build 10240 and I understand that. Doesn´t make sense using a build from a year ago and It was the inicial stable release which means was not stable at all comparing to November Update or even Anniversary Update. I understand the continuous support for build 10586 because anniversary update just came out. People have no excuse for not using build 10586 which is from November Last year, a few months from now and will be a year since that release came out as well.
Sorry horrible english

Verified
Trusted
Content Creator
First cumulative update that installed for me in a while now. Crossing finger for this to continue.
Last edited: Aug 9, 2016

Verified
Hello,
I have updated Windows 10 :

Just noted a strange think on "Windows update" section: It is on my desktop but it is written : "Your phone is up to date" 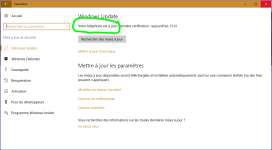 Is it possible to report this to Microsoft ? Of course I think it's impossible