Verified
Tests performed in Speedometer2.0 with only one open tab and no programs running in the background
I don't know if this data influences the test, but both had the same extensions: Adguard, HTTPS EveryWhere and BitWarden. 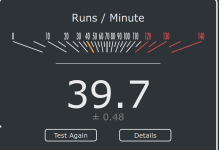 Looks like there's a clear winner in this speed test.

Verified
I found out that switching the default EasyList to the non element hiding variant actually speeds up the browser and hides most antiadblocking popups.
Using the default adblocker this way is faster than every extension out there and in my opinion a worthy sacrifice.
Other than that, the dark theme still needs some work, while the Snapshot/easy setup buttons should be hideable.

Sr. Normal said:
Tests performed in Speedometer2.0 ....
Looks like there's a clear winner in this speed test.
Click to expand...


On the bright doownload speed with VPN enabled only has (as expected) impact on ping time, download speed is as fast as without
Last edited: Apr 12, 2019

Verified
Content Creator
container is enabled without flag, but the ://flag isssue existed a month ago when i tried to enable it on opera dev

Report issues/problems to the Bug Report Team might or might not work depending if they class the report as an actual bug or not. I previously been successful even without a reply. There follow up and close case/tickets procedure could be much better.

Operas Snapshot feature is a step in the right direction but as it's too restricted IMO ( only catch/save the browser view and nothing else outside ) , I rather use Windows built-in or Snagit.
Last edited: Apr 11, 2019

Moonhorse said:
container is enabled without flag, but the ://flag isssue existed a month ago when i tried to enable it on opera dev
Click to expand...

Thanks for the reply. When I check with Process Explorer it shows UNTRUSTED in stead of APPCONTAINER

Verified
Trusted
Content Creator
Finally managed to write my own add block rules for the build in Adblocker. So removed uBlock 0rigin. After explicitely adding [Adblock Plus 2.0] as first line. Only using Peter lows list with the build in and blocker and a list of 150 most used ad and tracking blockers used on news websites I found somewhere on the internet (of which 80 are already present in Peter Low's List, but I never bother to find out what the duplicates were since Ublock0rigin ignored them anyway). No idea whether Opera's build in adblocker also ignores duplicates. I think Firefox took a smarter approach by using a minimal list of Disconnect (I think it is the simple ad filer), for maximum compatibility.

NB I would prefer using Disconnect list in stead of peter Low's, but Opera's build adblocker refuses to import it.

I use DuckDuckGo as default search engine and have google and startpage (EU servers) as bookmarks (I like a complete blank new tab page ) and I use these adblock lines to filter out advertisements on search pages (DuckDuckGo has an option to NOT show advertisements). You need to replace googlr.NL with your country code (e.g. google.BR, google.IN, google.GE, etc)

Verified
Trusted
Content Creator
Playing with it to see whether Opera will be my privacy oriented browser: currently used extensions - build in Adblocker with some custom rules. Chrome extensions Trace (without its blacklist) and Auto History Cleae and off-course User-Agent Switcher to set my user Agent on Chrome latest (with the small percentage of people using Opera it is not a good idea to keep it on default when considering to use Opera as my pricacy oriented browser). Anyone care to give Oracle Opera a spin at BrowserAudit? Windows_Security said:
Playing with it to see whether Opera will be my privacy oriented browser: currently used extensions - build in Adblocker with some custom rules. Chrome extensions Trace (without its blacklist) and Auto History Clear. Anyone care to give Oracle a spin at BrowserAudit?
Click to expand...

What is this Oracle that you are talking about?

I saw you talking about it here too:
Extension - NoScript extension officially released for Google Chrome

Nightwalker said:
What is this Oracle that you are talking about?

I saw you talking about it here too:
Extension - NoScript extension officially released for Google Chrome

Sorry dyslectic, should be Opera (Oracle was originally a data base vendor which has expanded to lots of other services like HRM and ERP software), apologize for the confusion :emoji_expressionless:

Verified
I know this is off-topic

Sr. Normal said:
Tests performed in Speedometer2.0 with only one open tab and no programs running in the background
I don't know if this data influences the test, but both had the same extensions: Adguard, HTTPS EveryWhere and BitWarden.
Firefox 66.0.2= 39.7
Click to expand...

Tests performed in Speedometer2.0 with only one open tab and no programs running in the background
I'm on 66.0.3 Firefox with adguard (paid), Canvas Blocker and Policy Control (disabled for the test)
No clue what the test exactly does i was just curious, did it and wanted give another result. So not only is the Microsoft DEV more stable than the Opera Stable, it also is faster on my desktop :-/

So not only is the Microsoft DEV more stable than the Opera Stable, it also is faster on my desktop :-/
Click to expand...

When Opera Software unveiled a new look and feel for its browser earlier this year, the company made a big deal of the impending changes. "We put Web content at center stage," the Opera team declared on its blog. And early previews of the design appeared to be quite pared down, allowing users to browse "unhindered by unnecessary distractions" as the Opera team put it. Well Opera recently released what the company refers to as Reborn 3, the latest version of its flagship desktop browser, and it's tempting to dismiss the name as little more than marketing hype. But given the relentless and utterly unspectacular updates that the Chromium project releases every six weeks, it can also be hard to denote actual big releases of browsers based on Chromium—hence the "Reborn" moniker. After spending some time with Reborn 3, however, the name seems accurate. For Opera, this is a significant update that goes far beyond what arrived with the move to Chromium 60.

Opera Reborn 3—or Opera 60 if you want to stick with version numbers—transitions a slew of features that recently debuted in Opera's mobile browsers to the desktop. The big three in this release are support for blockchain-secured transactions, a crypto wallet to go with the mobile version, and a new overall look with light and dark themes available. So if you haven't checked out Opera lately, it's worth revisiting, especially for those older Opera fans still smarting about the switch from Opera's Presto rendering engine to Google's Blink rendering engine. Opera once filed a complaint with the EU saying that Internet Explorer was holding back the Web "by not following accepted Web standards." The founders of Opera (who have since moved on to other things) probably never imagined their browser would one day share a rendering engine with Internet Explorer, but it does now. And it's true, this is not the Opera of old—there's no mail client, no IRC support to name a few things—but it does presently offer features that make it much more useful than Chrome or Chromium. That said, Opera's user base (like that of every other Web browser) pales next to Google Chrome. But Opera was the originator of many things we all take for granted that have become part of any Web browser these days. Tabbed browsing, mouse gestures, and the "speed dial" of page thumbnails on new tabs are just a few of the things that started life in Opera. The company's innovation track record is impressive, and it bears paying attention to what Opera is doing. Firefox, Chrome, and the rest have long since copied all those features listed above, but for quite some time if you wanted to know what the future of the Web browser looked like, you checked in with what Opera was doing. So while Opera may have opted for aspects of the current en vogue playbook by taking a Web-centric approach to Reborn 3, what makes this latest release interesting is that it does offer quite a few new things that still feel well afield of what the rest of the market is doing.

The first thing that jumps out about Opera 60 is that most of the new features arrived in the mobile version first and came to the desktop afterward. This makes sense given that much of Opera's user base today is on mobile. In fact, mobile is one area where Opera still leads the browser field with considerable innovation. For instance, Opera Touch has managed to do something no other mobile browser has yet pulled off—making it easy to browse with one hand even on larger devices. Touch also has some thoughtful features like a built-in cookie dialog blocker that's actually pretty effective at hiding those annoying legal-compliance cookie notices. I've also long been a fan of Opera Mini, which is a perfect mobile browser for bandwidth constrained situations. Opera Mini pipes all traffic through Opera's servers to first compress pages, after which they are sent on to your phone in much smaller form. This saves considerablebandwidth. I wouldn't use it for mobile banking, but it's great for casual Web surfing on sketchy 2G/3G connections. Admittedly, Opera's desktop offering with Reborn 3 is considerably less innovative in comparison to those two. But this newest release still offers plenty of features you won't find in Chrome or Firefox, including the new blockchain support and crypto wallet. What will be most obvious to Opera users in this update, though, is the new look.
Click to expand...

Opera Reborn 3: No modern browser is perfect, but this may be as close as it gets

While not as innovative as its mobile brethren, new release closes the gap with Vivaldi.

Chinese owned company offering privacy protections - what could possibly go wrong?
You must log in or register to reply here.