The Computer Folder Is 40: How the Xerox Star Created the Desktop

In 1981, Xerox released the 8010 Information System, the first commercial computer to use the graphical desktop metaphor with folders and icons that we still use today. 40 years later, we take a look at why it was special.

In the 1960s and 70s, most computers were large, expensive devices operated using batch-processing with punched cards or through interactive command-line operating systems accessed through teletypes or video display terminals. They weren’t very user-friendly and required specialized training to program or operate properly.

In the early 1970s, Xerox began to experiment with a new graphical approach that culminated in its revolutionary Xerox Alto computer, which utilized a mouse and a bitmapped display. When it came time to commercialize the Alto into a shippable product in the late 1970s, Xerox needed an interface that could ease office professionals without computer training into using computers. That job fell to David Canfield Smith of Xerox, who invented the desktop metaphor for the 1981 Xerox Star 8010 Information System.

When Xerox tasked David Canfield Smith with figuring out how ordinary office workers could use Xerox’s new bitmapped computer system, Smith drew on his research work with graphical computing, where a computer could be programmed visually. In the process, Smith invented the computer icon, first outlined in his 1975 doctoral thesis.

As an extension of that, Smith realized that he needed a metaphor that office workers already understood. He settled on visual, on-screen representations of real-world objects such as file cabinets, folders, and in-baskets that office workers used every day.

“The folder was a real-world metaphor for the computing ‘directory’ file,” wrote Cox in an email to How-To Geek. “It was probably the easiest of all the icons to render, since it had such a common real-world representation (the ubiquitous manila folder) with a very distinct shape.”

Cox had more trouble drawing a generic document icon, whose design went through several iterations. “Initially the document icon was difficult to visually indicate a piece of paper,” says Cox. “The turned-down corner inspiration came from an icon embossed on the office copier that instructed users how to correctly insert documents into the feeder–face up or face down.” 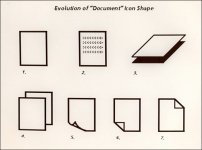 Ultimately, the Star interface proved familiar to office workers, and Smith says in his speech that it was received well during testing. It wasn’t quite as flexible as some desktop-based GUIs that came after the Star, but it undoubtedly pioneered the desktop-and-icon-based computers we commonly use today.
Click to expand...

Reactions: Venustus, Andy Ful, Deletedmessiah and 5 others
You must log in or register to reply here.

MAC vs PC – Which Is Right For You?