Tech News These epic infographics show how Microsoft stacks up against Apple, Google, and Amazon

The rather awesome newsletter App Economy Insights recently shared a range of interesting graphics that give a granular look at how Microsoft stacks up against some of its biggest competitors.

Microsoft posted strong Q4 2022 results a couple of weeks back, emphasizing a commitment to gaming while showing solid performance across Surface and other verticals. The PC business has taken a bit of a hit in the more recent quarter, but that's arguable to be expected when compared to the pandemic boom of previous years — everyone ran out and bought shiny new Windows laptops to set up home offices en masse. And now, well, they don't really need to buy any more.

In any case, let's take a closer look at how Microsoft's biggest competitors compare to each other, following Apple, Google (Alphabet), and Amazon. As we all know, Apple's business model revolves entirely around monstrous iPhone margins, with a growing services segment as the firm makes efforts to diversify. The App Store and things like Apple Music and Apple TV are heating up, and Mac is even starting to take a bite out of the Windows PC monopoly, owing to the firm's strong investment in its chipsets.

FYQ4 2022 for Apple saw them hit $20.7 billion in profit on $90.1 billion in revenue. The revenue is almost double that of Microsoft's $50.1 billion for the same period, but Microsoft's profitability is no slouch, at $17.6 billion. Google's business very much still revolves entirely around ads, with ad services and ad provision creating the bulk of $69 billion quarterly revenue. YouTube makes up a sizeable chunk of that, although again, that's ultimately within their ad business, for the most part. YouTube Premium subscriptions and other revenue streams seem to be performing well here too. Amazon sports an impressive and diverse portfolio of services and is the dominant force in all online retail. With $53 billion dollars in revenue for online sales alone, Amazon continued to see growth in a cooling market.

Amazon's advertising and cloud businesses also grew, but the firm's overall profits were "just" $2.9 billion, giving them a slim 2% operating margin, the lowest of the bunch here. Amazon's massive fulfillment operation will doubtless be uniquely impacted by the macroeconomic environment right now, as energy costs soar and inflation heaps pressure to increase wages. Amazon is potentially among the most vulnerable of the four here when it comes to the strange economy we're in right now, as customers seek to tighten their belts. Although, deals seasons like Black Friday and Prime Day should entice shoppers who are eager to save money. Microsoft's business revolves increasingly around cloud services, with its Intelligent Cloud division hot on the heels of Amazon's $20.5 billion cloud business at $20.3 billion. It seems entirely likely that Microsoft's sharp focus on cloud could see them overtake Amazon's AWS in the near future, at least in terms of revenue. It's a stunning turnaround from ten years ago, when AWS was utterly and completely dominant in the space.

Microsoft has issued an advisory to shareholders that it expects its Azure business growth to slow down in the next quarters, owing to fears of a near-future global recession.

What's notable here is that Microsoft has the highest operating margins of all the big four for that specific quarter, clocking in at 35%. That's even better than Apple itself
Click to expand... 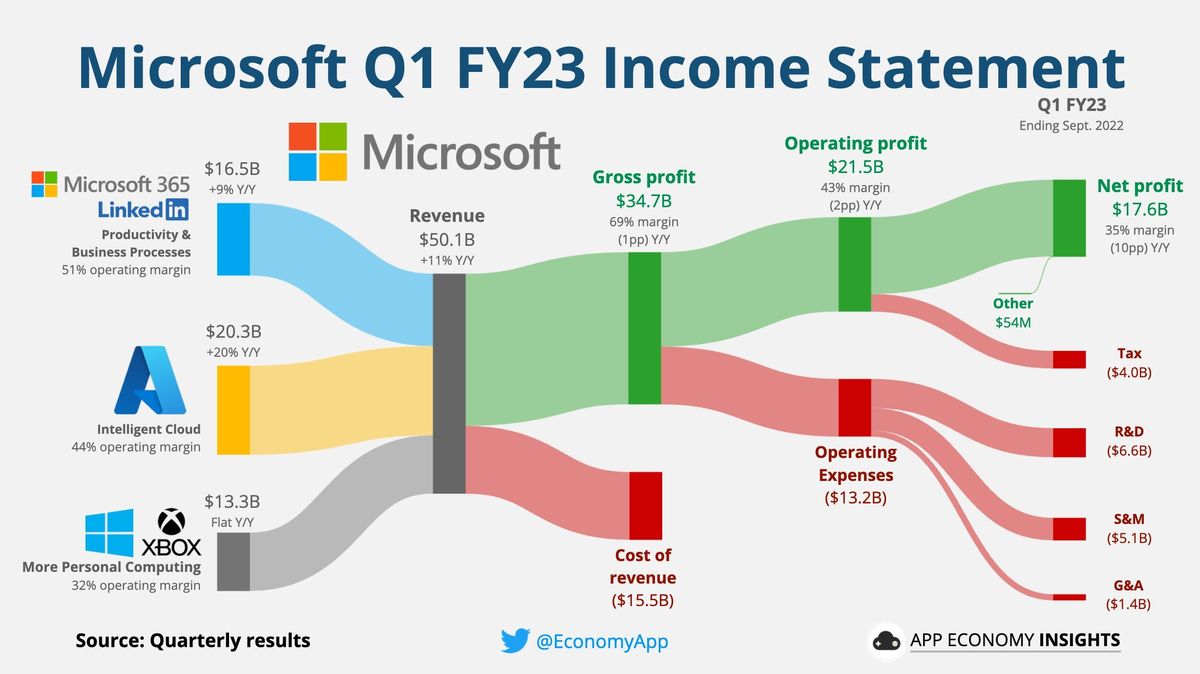 These epic infographics show how Microsoft stacks up against Apple, Google, and Amazon