The new version of the multimedia player is already on the official FTP server. The company released a total of nine release candidate builds before that and used these builds to fix various issues before the final release. 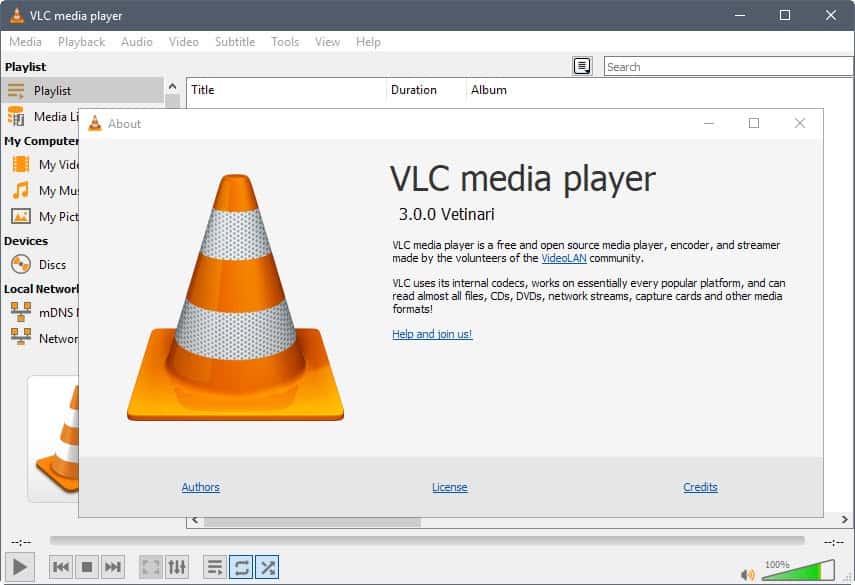 VLC 3.0's interface looks more or less identical to previous versions. VideoLAN marked it as a LTS, Long Term Service release for several systems. The organization notes that VLC 3.0.x will be the last working releases for Windows XP and Vista, and the matching Windows server variants, for Mac OS 10.7, 10.8 and 10.9, for iOS 7 and 8, and for Android 2.x, 3.x, 4.0.x and 4.1.x.

The 3.0 branch of VLC has new requirements:

Side note: The new VLC 3.0 fixed long-standing WMV playback issues that I experienced when using VLC. It would not play some WMV files correctly, and I had to use Windows Media Player for these files. This seems to have been fixed in VLC 3.0.

Closing Words
VLC Media Player 3.0 is a major upgrade of the player, the first in years, that corrects several issues, especially in regards to compatibility and functionality, that were not addressed in minor release upgrades.

"Yes" until last month
I liked playing most of the media easily without adding it, but due to a bug that the playing speed becomes strange, I am now using smplayer and Light Alloy.
Reactions: bribon77, frogboy and Faybert

show-Zi said:
"Yes" until last month
I liked playing most of the media easily without adding it, but due to a bug that the playing speed becomes strange, I am now using smplayer and Light Alloy.
Click to expand...

SMPlayer is very good, sometimes I use it
Reactions: bribon77 and frogboy

Well, they did change the icons inside the program.
Honestly, I like that simple look and I wouldn't change it. If you don't like the default skin, you can always download some or even create one yourself.

Can't wait for the new version because of Chromecast support.
Reactions: bribon77 and frogboy
I

According to this message posted at http://nightlies.videolan.org/build, VLC 3.0 is not ready yet.

Always download VLC from https://www.videolan.org, and never from any other place!

Media "news" outlets reported on VLC 3.0 release are wrong, 3.0 is not yet released - we'll announce it when it's ready.
Click to expand...

No I use and prefer Global Potplayer it is my go to media player.
Reactions: bribon77 and Marko :)

I use VLC Player. For years I have tried another. but I always use this one.
Reactions: frogboy and Marko :)

That's cool, i've been waiting for this for a long time !
VLC is one of best all-media-files player of the cyber-world
Reactions: Marko :), frogboy and bribon77