What is VMOS PRO​

VMOS is an Android emulator that can only run on Android platforms in other words you can have an Android that is inside Android. All activities that you do in VMOS will not affect your android on your smartphone. Recently the VMOS developer launched an update.

VMOS Pro is the latest version of VMOS. A very basic difference from the previous version is that VMOS Pro carries Android 7.1 as its base. While the old version of VMOS still uses an outdated version of Android 5.1. VMOS Pro keep abreast of trends in the android emulator app which currently uses an average of Android 7.1 as its ROM. The ROMs are available in either 32-bit or 64-bit version. All the ROMs can be as an image. So you can use VMOS Pro running multiple ROMs at the same time

Most VMOS users are Pokemon GO players, they use VMOS because of its ease of spoofing Pokemon GO without having to ROOT their android smartphone. Can VMOS Pro answer most of the user’s wishes?

The english version in the above is a very much slower release than the chinese version released. As of this posting the latest chinese version is 1.1.37. VMOS Pro chinese release is pretty fast so must keep track of its releases. Search the net for it. Note that after installation of the chinese version there is a mix of chinese and english texts in the app so usage is not an issue.

VMOS Pro is a total change from the previous version. When we install VMOS Pro we will be given 3 choices namely VMOS with Google Apps (including Google Play Service and Google Play Store), VMOS with ROOT Access, Chinese version of VMOS. We will discuss in detail the three choices

If you choose this when installing VMOS PRO you will get VMOS with pre-installed Google Apps. This means Google Play Service and Google Play Store have been installed automatically. We no longer need to install it manually. This version uses Android 7.1 as the system. In this version, we don’t get ROOT access.

If you select this when installing VMOS you will get ROOT access by default. But in this version Google Apps is not installed, this means there is no Google Play Store and is not suitable for playing Pokemon GO. Because Pokemon GO requires Google Play Services and certainly does not support ROOT-ed android. In this version VMOS still uses Android 5.1.

This version is the original version of VMOS with Android 7.1 and without Google Apps. This version probably has no hope of being able to play Pokemon Go. This version is a version that is specifically for users who come from China

How to install VMOS PRO​

Videos are here to assist you

VMOS is an Android emulator that can only run on Android platforms in other words you can have an Android that is inside Android. All activities that you do

Here's a picture of the various options of the ROMs you can choose to install as your VM. Sorry, I think such options are only available in the chinese version. The official english version in the above link has far fewer options. 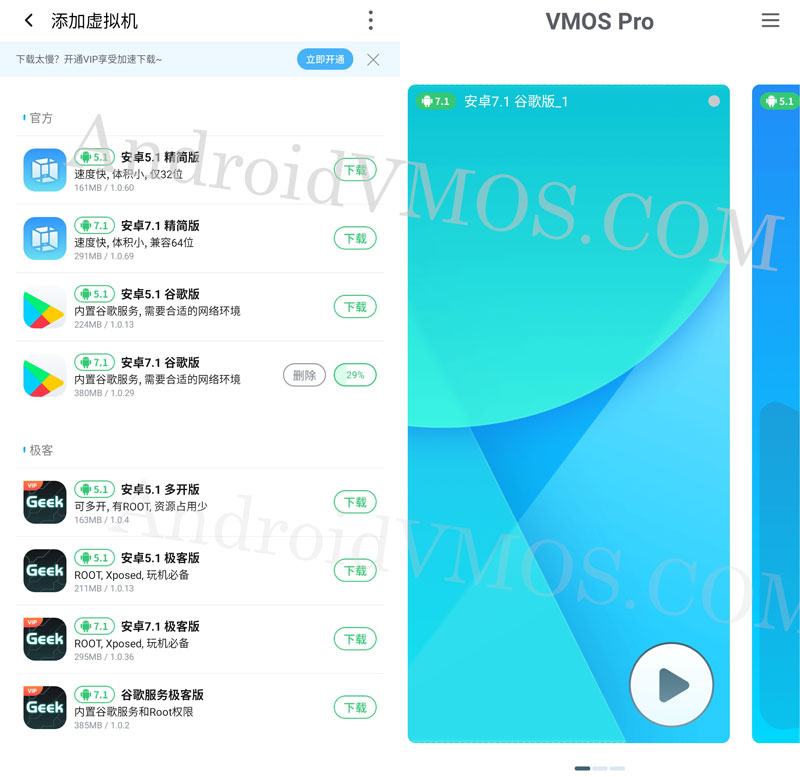 1) I tried installing a dedicated VPN into the VM, but it won't work. Similarly, when I installed Dr Web Security Space into the VM and tried to enable its firewall, which requires a local VPN, but couldn't. In short, app which requires a VPN in the VM unlikely would work. Adguard for android can't call its remote server.

2) It works similarly to the VM in your PC/laptop. Your dedicated VPN installed can go through the VM. So, if you need to have double-hop VPN, then your dedicated VPN app in your phone must support this feature like in NordVPN, SurfShark VPN etc

Dr Web Security Space's firewall would not work inside the VM

Just make sure the AV/AM supports the browsers you installed

4) So far FF works the best. Chromium-based browsers like Brave and Bromite have an issue with its homepage if set to say using DDG

My VM info and installed apps are as below. The right side picture shows the floating ball expanded.

6- Increase the cache to 4MB

How to Improve application response speed in VMOS - AndroidVMOS

This explanation for normal application use is not intended to speed up games, So you can run apps in VMOS rom faster and smooth. Method...

Android Yesterday at 6:09 AM
silversurfer