Windows 10 21H1 is released, these are the new features

Can somebody tell me is it possible to set DOH in this version by a registry hack or some other way? If so how?
Reactions: Nevi, ZeePriest, Stopspying and 4 others 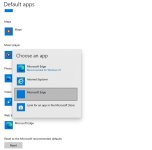 nishaddesilva said:
Can somebody tell me is it possible to set DOH in this version by a registry hack or some other way? If so how?
Click to expand...

No, it is pushed back to 21H2 later this fall.
Reactions: Nevi, ZeePriest, Stopspying and 8 others

Reactions: ng4ever, Nevi, ZeePriest and 3 others

First of all, it’s the high-pitched noise glitch that has recently been confirmed in the previous versions f Windows 10 and hitting 5.1 audio with certain settings.

“After installing or later updates, 5.1 Dolby Digital audio may play containing a high-pitched noise or squeak in certain apps when using certain audio devices and Windows settings. Note This issue does not occur when stereo is used,” Microsoft explains.

The issue also exists on Windows 10 version 2004 and 20H2, and Microsoft explains that fixing this one comes down to streaming the video or audio using a different app or to disabling spatial sound on the OS.

Full fixes in the works​

The second known issue concerns the automatic input of Furigana on a Windows 10 device.

Users impacted by this glitch need to revert to a previous version of an IME. Microsoft confirms that the bug also affects the previous Windows 10 versions, namely 2004 and 20H2.
Click to expand... 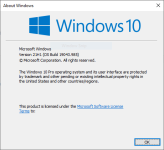 SecurityNightmares said:
Did you used 1909 build before?
21H1 only activate a small update which a up2date 20H2 already has installed.
That's why this upgrade should be fast and it was finished for me in 1 minute.


These dots are available if you installed Windows updates but don't reboot yet to finish them.
Not new stuff.
Click to expand...

I was using 20h1.
If you check the install date you will see that it was overwritten and installed by the Update Assistant.
The other desktop PC was updated using the kb 5000736 standalone program. As you noted, it took less than 2 minutes.
Reactions: Nevi, ZeePriest, venustus and 2 others

Forget the Update Assistant. It takes way too long.

If it hasn't dropped on your system yet and you really can't wait, you can do it this way, and download the enablement package.

Safe for me to say that this is the most boring windows update ever, which is a good thing
Reactions: CyberTech, Stopspying, venustus and 6 others

Paul Lee said:
Safe for me to say that this is the most boring windows update ever, which is a good thing
Click to expand...

How big was the update?GB?MB?
Reactions: venustus, Nevi and ng4ever

ZeePriest said:
How big was the update?GB?MB?
Click to expand...

If I recall correctly, I think around 110MB. Using the enablement download, it takes a couple of minutes with one restart.
Reactions: ng4ever, CyberTech, venustus and 3 others
N

Is 21H1 worth updating to or wait until I am forced to or it becomes a required update?
Reactions: venustus and ZeePriest

ng4ever said:
Is 21H1 worth updating to or wait until I am forced to or it becomes a required update?
Click to expand...

It's just an enabling package. No new features are added. You can wait for it to become a mandatory update ( now it's just an optional one)
Reactions: venustus, Gandalf_The_Grey, ZeePriest and 2 others
You must log in or register to reply here.

Windows 10 21H2 is released, here are the new features