Beginning from Windows 11, an application can add only a single top
level command or submenu to Explorer context menu.

If "Cascaded context menus" in "Integration settings" dialog is on,
this single item is a submenu storing all necessary WinRAR commands.

If this option is off, only one extraction command for archives
and one archiving command for usual files are available.
You can select these commands with "Context menu items..." button
in "Integration settings" dialog.

This option is not available in Windows 10 and older.

5. "Close" item is added to "When done" list on "Advanced" page of
archiving dialog. It closes WinRAR window, when archiving is done.

6. "When done" list is added to "Options" page of extraction dialog.
It allows to select an action like turning a computer off
or closing WinRAR after completing extraction.

7. Switch -si can be used when extracting or testing to read archive
data from stdin, such as:

Even though the archive name is ignored with this switch,
an arbitrary dummy archive name has to specified in the command line.

Prompts requiring user interaction are not allowed.
Use -o[+|-|r], -p<pwd> or -mes switches to suppress such prompts.

8. New -ep4<path> switch excludes the path prefix when archiving
or extracting if this path is found in the beginning of archived name.
Path is compared with names already prepared to store in archive,
without drive letters and leading path separators. For example:

removes "text\books" from archived names, so they start
from 'technical'.

11. If 'p' command is used to print a file to stdout, informational
messages are suppressed automatically to prevent them mixing
with file data.

12. "Generate archive name by mask" option and switch -ag treat only
first two 'M' characters after 'H' as minutes. Previously any
amount of such characters was considered as minutes.

It makes possible to place the time field before the date,
like -agHHMM-DDMMYY. Previous versions considered all 'M'
in this string as minutes.

Previous WinRAR versions are not able to use the recovery record
to repair broken archives if recovery record size exceeds 99%.
Similarly, previous versions cannot use recovery volumes
if their number is equal or larger than number of RAR volumes.

14. Warning is issued if entered password exceeds the allowed limit
of 127 characters and is truncated. Previously such passwords
had been truncated silently.

15. If archive includes reserved device names, the underscore character
is inserted in the beginning of such names when extracting.
For example, aux.txt is converted to _aux.txt. It is done to prevent
compatibility problems with software unable to process such names.

You can use "Allow potentially incompatible names" option
in "Advanced" part of extraction dialog or command line -oni switch
to avoid this conversion.

16. WinRAR attempts to reset the file cache before testing an archive.
It helps to verify actual data written to disk instead of reading
a cached copy.

Previously multiple -v<size> switches were supported only for
RAR archives.

18. Switches -sl<size> and -sm<size> can be used in WinRAR.exe command
line mode when extracting archives in any supported formats,
provided that such archive includes unpacked file sizes.
Previously these switches could filter files by size only in RAR
and ZIP archives.

20. When restoring from tray after completing an operation,
WinRAR window is positioned under other opened windows,
to not interfere with current user activities.

21. "650 MB CD" is removed and "2 GB volumes" is added to the list of
predefined volume sizes in "Define volume sizes" dialog invoked
from WinRAR "Settings/Compression".

22. "Rename" command selects the file name part up to the final dot.
Previously it selected the entire name.

23. If SFX archive size exceeds 4 GB, an error message is issued
during compression, immediately after exceeding this threshold.
Previously this error was reported only after completing compression.

Executables of such size cannot be started by Windows.

24. Command line -en switch is not supported anymore.
It created RAR4 archives without the end of archive record.

a) when editing a file inside of .rar or .zip archive,
WinRAR created a new SFX archive instead of updating an existing
archive if "Create SFX archive" option was set in the default
compression profile;

b) the total progress could be displayed incorrectly when using
-oi, -f, -u switches or appropriate GUI options;

c) "Find files" command with "Use all tables" option and command line
"it" commands failed to find strings in UTF-16 encoding.
Click to expand...

RARLAB, the developer of the archiving software WinRAR, released WinRAR 6.1 in January 2022. The new version of WinRAR changes the system requirements, as support for Microsoft's Windows XP operating system has been dropped in the version.
Click to expand... 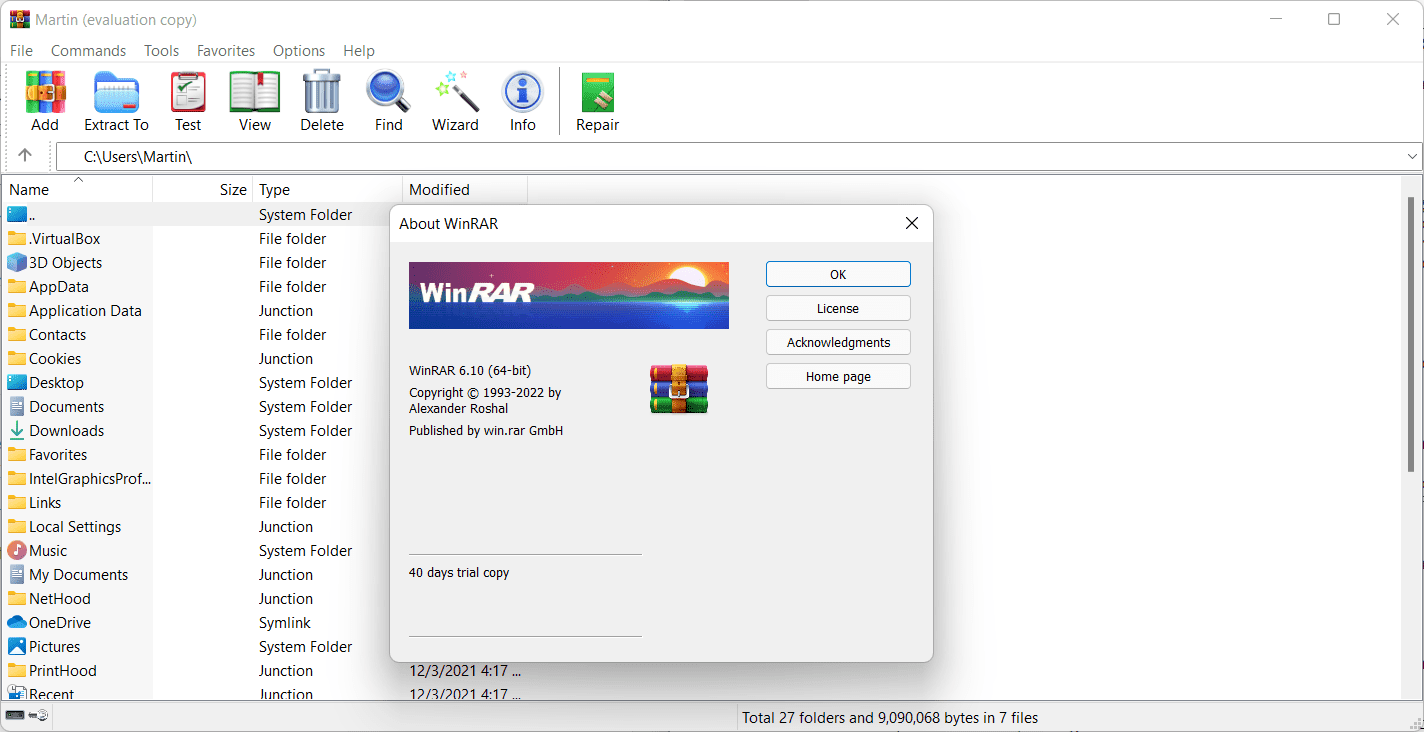 RARLAB, the developer of the archiving software WinRAR, released WinRAR 6.1 in January 2022.
www.ghacks.net
Reactions: Nevi, amirr, Deletedmessiah and 4 others

2. Archive comments in gz archives are displayed in the comment window
and recognized by "Show information" command. Large comments are
shown partially.

3. Reserved device names followed by file extension, such as aux.txt,
are extracted as is in Windows 11 even without "Allow potentially
incompatible names" option or -oni command line switch.
Unlike previous Windows versions, Windows 11 treats such names
as usual files.

Device names without extension, such as aux, still require these
options to be unpacked as is regardless of Windows version.

4. Switch -mes can be also used to suppress the password prompt
and abort when adding files to encrypted solid archive.

a) if password exceeding 127 characters was entered when unpacking
an encrypted archive with console RAR, text after 127th character
could be erroneously recognized as user's input by different
prompts issued later;

b) wrong archived file time could be displayed in overwrite prompt
when extracting a file from ZIP archive. It happened if such
archive included extended file times and was created in another
time zone. It didn't affect the actual file time, which was set
properly upon extraction.
Click to expand...

Do you have the Windows 11 context menu of WinRAR in your Windows 11?
Reactions: Nevi, roger_m, silversurfer and 1 other person

amirr said:
Do you have the Windows 11 context menu of WinRAR in your Windows 11?
Click to expand...

In my case it is in the Windows 11 context menu
Reactions: Nevi, roger_m, silversurfer and 1 other person

Asterixpl said:
In my case it is in the Windows 11 context menu
Click to expand...

Are you in the stable version of Windows 11 or Dev or Beta?
Reactions: silversurfer and Asterixpl

amirr said:
Are you in the stable version of Windows 11 or Dev or Beta?
Click to expand...

In Dev version of Windows 11, this is missing: 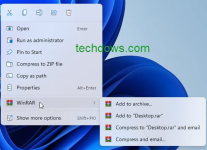 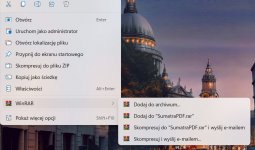 Yes, that's normal, but in Windows 11 Dev, that doesn't happen. It's a bug.
Reactions: Nevi and silversurfer

amirr said:
Do you have the Windows 11 context menu of WinRAR in your Windows 11?
Click to expand...

You can try to check in WinRAR Settings => Integration 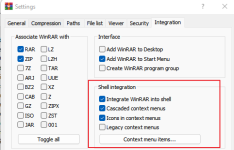 I did. Did not work. I also asked a friend whom he is on Win11 Dev, he said the same that in his PC with Dev of Windows 11, it did not work.
Reactions: Nevi, silversurfer and Asterixpl

silversurfer said:
You can try to check in WinRAR Settings => Integration

Are you on Win11 Beta or DEv?
Reactions: silversurfer

amirr said:
Are you on Win11 Beta or DEv?
Click to expand...

On my laptop it's Win11 latest stable, my screenshot was taken from this machine. I see now you talking about Dev... Sorry!
Reactions: Nevi, roger_m, harlan4096 and 2 others

silversurfer said:
On my laptop it's Win11 latest stable, my screenshot was taken from this machine. I see now you talking about Dev... Sorry!
Click to expand...

In Windows 11 Beta channel, there is no problem with WinRAR appearing in the right click context menu.
Reactions: Asterixpl, Nevi, silversurfer and 1 other person

In the normal release of WIn 11 no issue with 6.11 version
Reactions: Asterixpl, amirr, Nevi and 2 others