Almost 37 years after its launch, someone found an Easter egg in Windows 1.0

Dedication to the cause 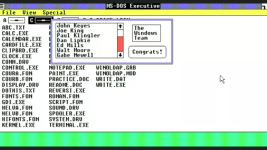 Easter is approaching so let's talk Easter eggs: an intrepid and incredibly dedicated user has uncovered a hidden dialog inside Windows 1.0. That's right, the very first version of the operating system, released way back in November 1985.

Credit to Lucas Brooks, who shared the find on Twitter (via XDA Developers). The secret message is simply a list of the developers who worked on Windows 1.0, though it's not a part of the software that you can find through conventional means.

Easter eggs hidden inside software can take all kinds of forms, and some are more well hidden than others. That this one took almost 37 years to uncover means it was pretty carefully concealed – hence the "Congrats!" message that goes along with it.

Which version of @Windows is the first to include Easter eggs? Windows 3.0? Nope. What if I tell you there is an Easter egg in Windows 1.0 RTM? This is what I have recently discovered: pic.twitter.com/dbfcv4r7jjMarch 18, 2022

According to Brooks, the hidden dialog was placed in encrypted form at the end of the smiley bitmap file included with the operating system. Back in 1985, there weren't actually any tools that could discover this kind of extra data.

Perhaps the most notable name in the newly unveiled list is Gabe Newell, now president at Valve – known for everything from Half-Life to the Steam Deck. Newell worked at Microsoft from 1983 to 1996, leaving to found Valve.

So take heart if you're still fiddling around inside software that's decades old, because there might still be some secrets that haven't yet been uncovered. Brooks has since found the same dialog in Windows 2.0 as well.

Analysis: why we love Easter eggs​

Easter eggs appeal to both developers and users alike, combining puzzles and secrets and a sort of knowing nod between the people working on a piece of software or a game and the users at the other end of the process.

Android has included an Easter egg for years, which you can usually find through the About phone page in Settings: if you want to see what's hidden inside the Android 12 code, then we're written out the full instructions for revealing the Easter egg.

Easter eggs are in lots of other Google products too – try typing "askew" into the Google search engine and see what happens. Others are hiding in plain sight, like the rating out of 11 (rather than 10) that Spinal Tap gets on IMDB.

There was even a full flight simulator hidden in Microsoft Excel 97, though unfortunately it hasn't made it into later versions of the application. And then of course there's the ongoing tradition of packing Easter eggs into movies and TV shows too.
Click to expand...

Last edited by a moderator: Mar 21, 2022
Reactions: peterfat111, oldschool, SeriousHoax and 7 others

Here, finally, a spoiler with a purpose. The "Easter egg" for a specific search word with the Google engine. Cute!

Anyone else try this yet? 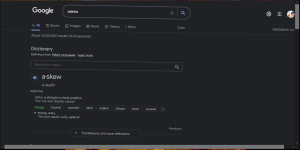 Reactions: Tutman, oldschool, SeriousHoax and 2 others
You must log in or register to reply here.