Reports are flooding in of Amazon's New World beta killing off EVGA RTX 3090 graphics cards. A number of users are reporting that the card is being destroyed by the MMORPG, and many commentators say other Nvidia models are showing 100% loads and reaching high temperatures on the main menu and loading screens.

"I just bricked a 3090 in the main menu after setting my graphics quality to medium and hitting save. Cant believe it. Anyone else had a catastrophic failure like this? I've been playing cyberpunk 3090 on Ultra for months, so this really doesn't make sense," writes the thread creator. "Anybody else joining the RMA club?"

It seems the EVGA RTX 3090 was the only card to experience catastrophic failures. Other RTX 30-series users and some owners of pre-Ampere cards say they have experienced incredibly high temperatures and 100% loads.
Click to expand...

Reactions: rain2reign, CyberTech, Filipe and 15 others

Clearly the card was poorly built, I wouldn't blame the game in this instance.

Especially considering this is the only card affected, all other cards run fine at 100% load as they should.
Reactions: Deletedmessiah, rain2reign, somename and 6 others

Yeah, looks like QA problem with the card as no software should be able to brick a GPU just because it is being utilized 100% of it's capabilities. This game might become the new stress testing app. Also one user had success re-flashing vBIOS.
https://www.reddit.com/r/newworldgame/comments/oobi56/_/h5zq2t5
Edit : grammar, my worst enemy
Edit 2 : Although re-flashing BIOS will most likely void the warranty.
Reactions: Deletedmessiah, rain2reign, venustus and 7 others

The issue here seems to do with the uncapped frame rate in the main menu, which causes high fps and power spikes.

If you have a 60,75,144 etc fps monitor cap your fps according, having your GPU push 500 fps is a complete waste of power.
Reactions: rain2reign, venustus, CyberTech and 7 others

I remember this happening with Starcraft 2 menus a long time ago. Seriously a safeguard for this should be in the firmware or driver.
Reactions: venustus, plat1098, Filipe and 4 others

Opc9 said:
The issue here seems to do with the uncapped frame rate in the main menu, which causes high fps and power spikes.

I personally always play with V-Sync enabled, no need to waste power.

Either way, GPUs shouldn't die due to being used at 100%, I stick with my opinion that the RTX 3090 was poorly built.
Reactions: Nevi, venustus, brambedkar59 and 5 others
H

Opc9 said:
The issue here seems to do with the uncapped frame rate in the main menu, which causes high fps and power spikes.

Not surprising... I mean, I have met highly successful scientists who still make the carnal mistake of not rounding off to the least precise number when they present their results. Sure you measured one system at 10.38485754387217%, but then you multiplied the result with another system that was only accurate down to 9% and yet you still provide the long answer.
Reactions: Nevi, brambedkar59 and venustus
C

A few days ago, Amazon Games' new MMORPG dubbed New World opened for beta testing and reports started pouring in about the game apparently killing Nvidia's GeForce RTX 3090 graphics cards. A large number of models that were bricking seemed to be EVGA models, in particular the FTW3 variants. A patch that would fix the problem by capping frames in the menu screen was promised yesterday by Amazon Games.

Andreas Schilling, who is an Editor of German news outlet Hardwareluxx, quizzed EVGA EU about the matter and the vendor has allegedly stated that the reports have hugely overblown the number of RTX 3090 cards that have died as apparently, that number is "in the single digits" only.
Click to expand... EVGA Europe has reportedly stated that the number of RMAs requested for RTX 3090 cards that have died while playing Amazon's New World is very few. The AIB allegedly also failed to recreate the issue.

We can already get a new pack to help with any future issues, 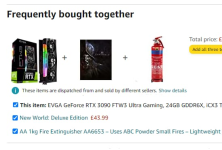 Aside from the fact that the RTX 3090's have a known design flaw which got burned, which is its VRAM design. There were also reports of card shutting down (failsafe??) on 10x0, 20x0 and AMD's 5700XT videocards. Some of them after an hour in-game rather than just the main menu, where most of the 3090's died in. And the reports are not in the single digits... Open up the New World forums for example, there alone are more reports than 10.

As much as it's an architecture flaw by Nvidia (they make the PCB's), it's also a flaw in the programming of New World. A Main menu has no business running at 300+ FPS to begin with. Animations are looped and pre-rendered, a few buttons and that is quite literally it. Like most other games, they should've capped it at 60 FPS for the main menu...

Edit: I find it quite curious that the majority of the reports (not all) were from EVGA cards, though. Since Nvidia makes the PCB's and the brand just do whatever else on them. Add OC, RGB, fans, power connectors, etc...
Last edited: Friday at 6:41 PM
Reactions: Gandalf_The_Grey, Nevi, venustus and 2 others And reports are that GPUs will be shipping out right about now too.

EVGA's problem with its RTX 3090 graphics cards and Amazon's New World are maybe not limited to those GPUs. Or even just that game. After investigating the matter in detail, German tech site, Igor's Lab, has discovered that the fans on affected cards are trying to hit ridiculously high speeds and that hardware monitoring is the most likely culprit.

If you run fan monitoring software on the affected cards, you'll spot some ludicrous fan speeds briefly being targeted. Igor managed to grab a shot of this happening with a GeForce RTX 3080 FTW3 Ultra, where the fan speeds briefly jumped up from their more regular 2,400RPM to over 200,000RPM. Gulp.

The fans obviously can't spin that fast, but that doesn't stop them from trying. With quite the whine for anyone in earshot. Something fundamental is clearly wrong here, and in case you're wondering, setting your own fan speeds, either manually or by creating your own fan profiles, doesn't seem to have any effect either.

The only answer appears to be lowering the GPU's power limit to 50–60%. That way the card never pushes itself so hard that it becomes a problem. Like a serious, GPU destroying problem.

At least EVGA has said it is replacing any affected cards if they've been bricked by the New World beta issues.
Click to expand... Disclaimer: The following article is machine translated from the original German, and has not been edited or checked for errors. Thank you for understanding! EVGA's GPU fans are trying to hit 200,000 RPM in New World, that might explain a fried chip or two

Ridiculously high fan speeds appear to be behind the issues with the New World beta and failing RTX 3090s.