The bug tracker for the Android Q Beta has just been opened up by Google, and according to the date filter, the beta is going to launch later today, March 11th.

First spotted by XDA-Developers' Mishaal Rahman, the bug tracker for the Android Q Beta has just been unveiled to the public. If you go to the goo.gl link in the description for bugs that have already been reported, you'll be taken to an Issue Tracker search with a date filter for March 11th filled in. What this means is that only reports made after today, March 11th, can be seen, so that only reports from the general public are shown. This is essentially confirmation that the Q Beta will be released later today.
Click to expand... 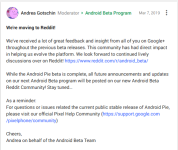 via We're moving to Reddit! We've received a lot of great feedback and insight ...
S

Today we’re releasing Beta 1 of Android Q for early adopters and a preview SDK for developers. You can get started with Beta 1 today by enrolling any Pixel device (including the original Pixel and Pixel XL, which we’ve extended support for by popular demand!) Please let us know what you think...

Everything new in the sixth Android Q developer preview

Here's a running list of all the changes we could find in the Android Q developer previews.

At Google I/O earlier this month we learned about all the improvements that Android Q is going to bring, and of course, new privacy and security announcements were not left out from the conference. The platform security is one of the most important aspects of an OS, particularly for an OS that we bring everywhere with us in our pockets. If Android wasn’t secure, we wouldn’t trust it with half as many functions as we do. NFC payments would be out of the question, file sharing would be dubious at best, and connecting to other devices would be downright madness. In spite of the long-standing issue of version fragmentation, Google has done extremely well to keep the number of security issues to a minimum.

Verified
Have been using the beta for 2 months now. Love the new features and cannot wait to use the final product!
R

Verified
Content Creator
My Xiaomi Redmi Note 4X is stuck on Android 7. It still receives occasional firmware updates, but won't be updated to a new version of Android.

However, I'm sure that there will be custom Android Q firmware released for it, as currently there are at least 20 different Android 9 ROMs available.

Verified
Nice poll... LG said my phone is only guaranteed two major OS versions. Since they released it with an outdated OS (7.1.2) and then upgraded to Oreo, I only have Pie and that's it. I don't even have Pie on my phone yet...
S

Android Q Beta 5 launches today! Today we're rolling out Beta 5, bringing Android Q Beta very close to the system behaviors you'll see in the final release. Developer APIs were already finalized in the previous update. So, now is the time to test your apps for compatibility and make sure they...

Verified
Im digging the new black boot screen!
You must log in or register to reply here.