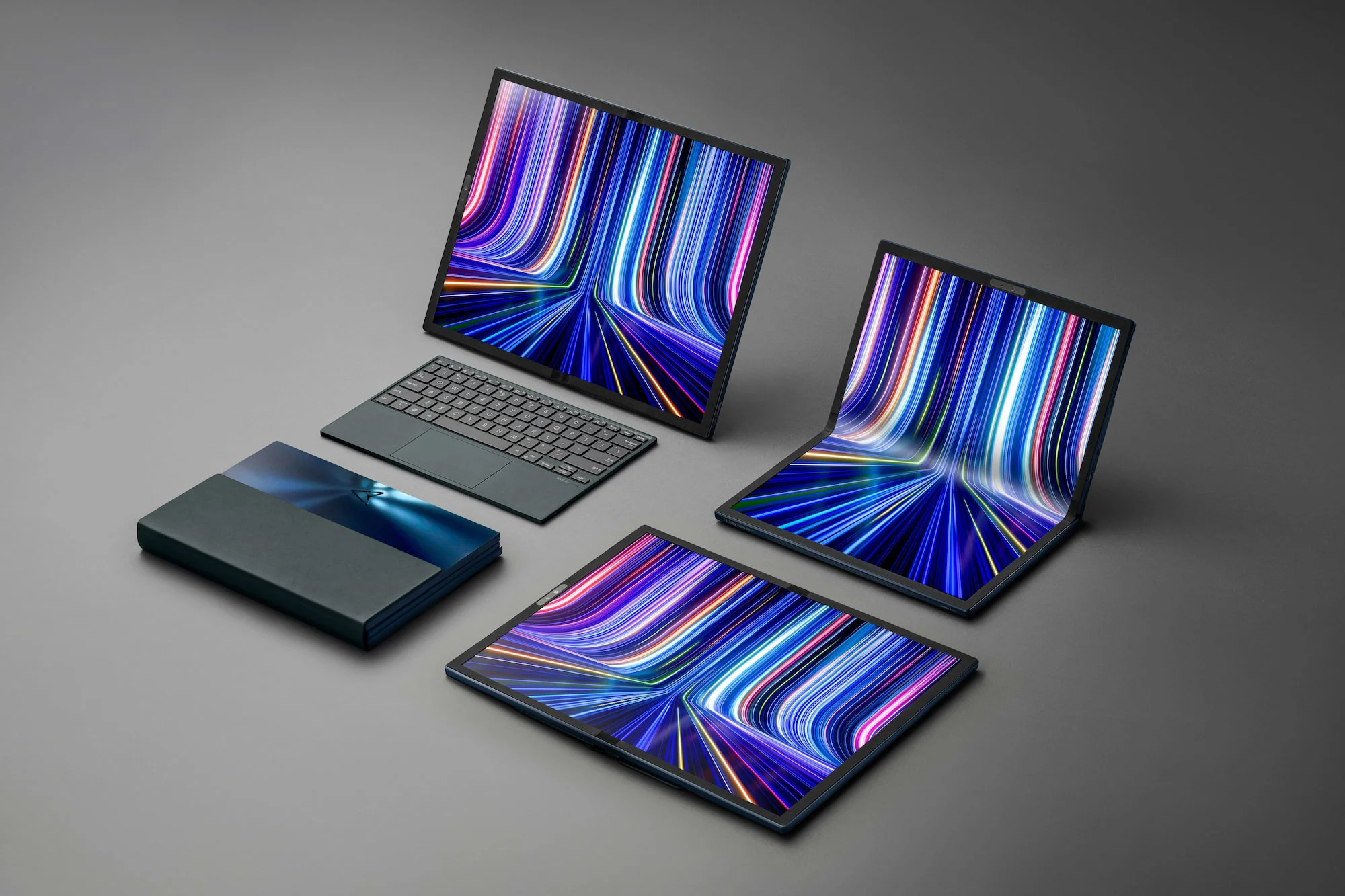 ASUS has a lot more to show off at CES than traditional laptops. The ZenBook 17 Fold is a full-screen foldable OLED tablet, which marks an evolution from the dual-screen Project Precog concept the company showcased in 2018.

The device comes with a Bluetooth keyboard with touchpad. When the screen is partially folded and the keyboard is positioned on the bottom half, it can effectively be used as a 12.5-inch laptop with a Full HD resolution. For more real estate, you can place the keyboard on the desk and stand the tablet up. 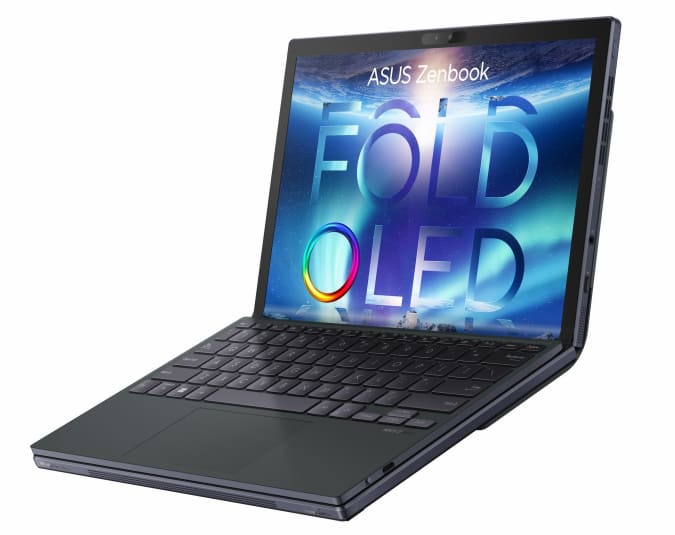 The ZenBook 17 Fold has a 75Wh capacity battery, WiFi 6E and Bluetooth 5.2 connectivity, a Dolby Atmos quad-speaker system and 1 TB of NVMe M.2 SSD storage. You can have up to 16 GB of LPDDR5 memory as well as "the latest Intel CPU" with integrated graphics. Ports are limited to a sole Thunderbolt 4 USB-C port and a 3.5mm combo audio jack. 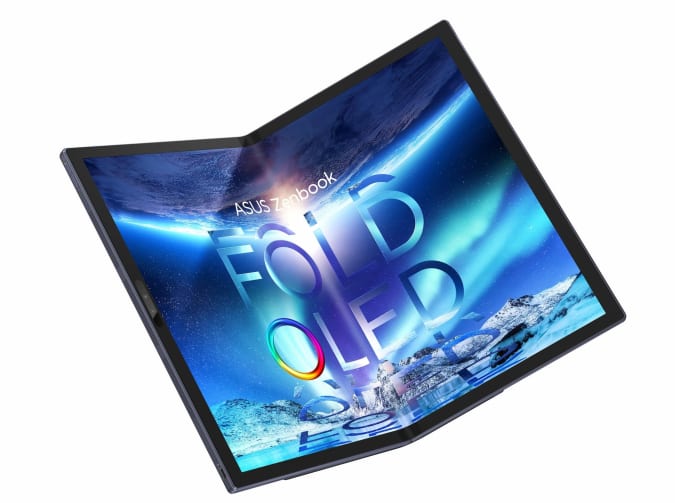 ASUS
It's hardly the first time we've seen a manufacturer attempt a foldable tablet PC. Lenovo revealed the ThinkPad X1 Fold at CES 2020, though we felt it wasn't up to scratch. Foldable phones, of course, have become more commonplace over the last couple of years too.

ASUS hasn't disclosed pricing though it's aiming to release ZenBook 17 Fold around the time of Computex in May. The device and keyboard weigh over four pounds combined, which could make it a hard sell for some folks. Whether ASUS can overcome that issue, as well as supply chain difficulties and problems other manufacturers have had with foldable devices, remains to be seen. 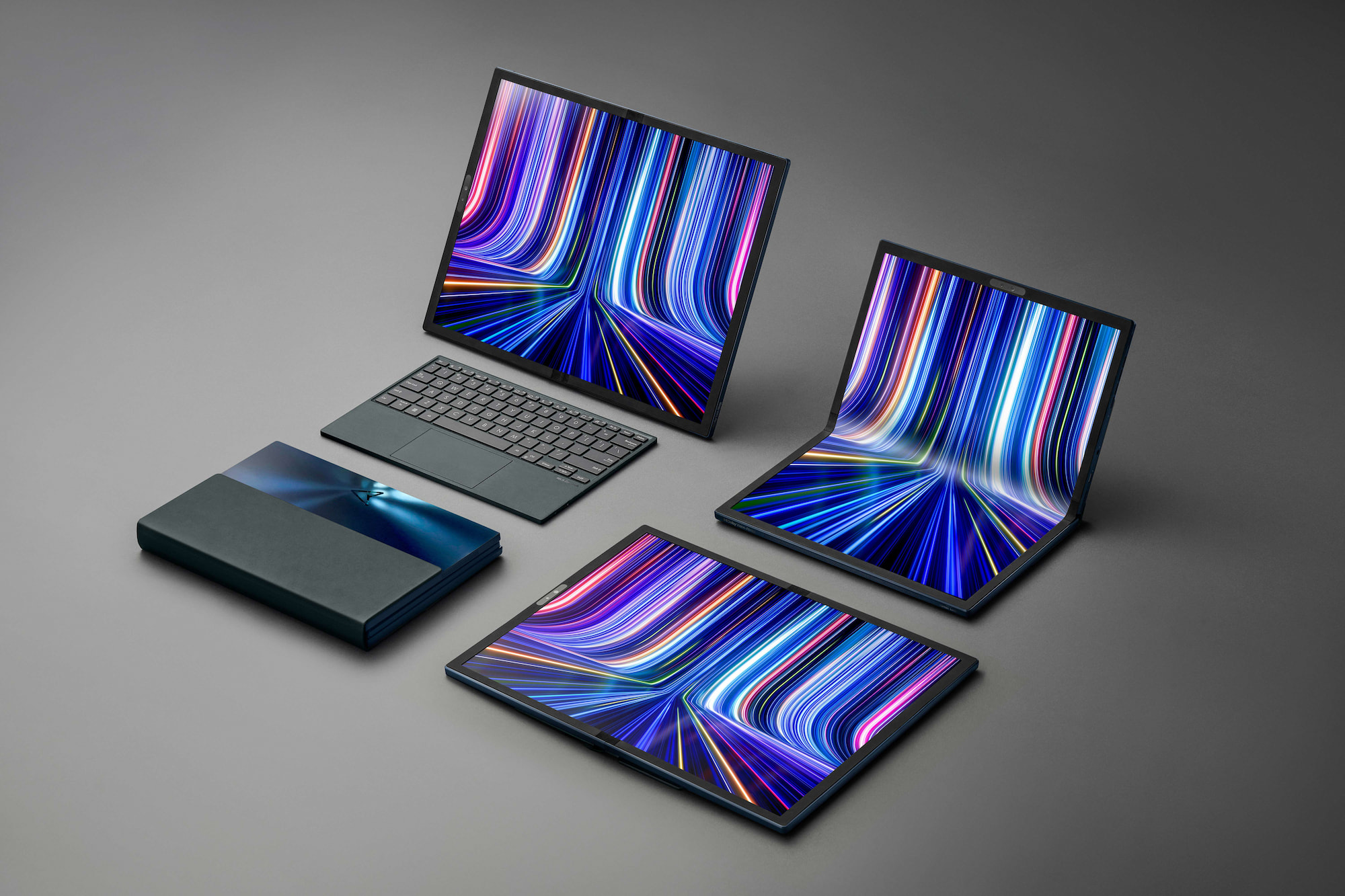 Using an included keyboard, the ZenBook 17 Fold can operate like a 12-inch laptop..

Lenovo always unveils a cornucopia of gadgets at CES and this year is no different. In addition to smart home products and various laptops, the company is showing off an unconventional approach to PCs. Since introducing the ThinkBook Plus series in 2020, Lenovo has used it as a platform to roll out unusual form factors, like the previous iteration with an e-ink screen on its lid.

Now that the laptop is in its third generation, Lenovo is moving its second panel down to the keyboard deck and making it a full-color LCD instead. Not only is this approach more useful, it’s also potentially more power-intensive. At a recent hands-on in New York (held in accordance with COVID-19 regulations), I checked out the ThinkBook Plus Gen 3 and, in spite of some bugs, I’m intrigued by the premise.


The laptop’s main screen is a 17.3 inch IPS display that runs at a 3K resolution. It’s accompanied by an 8-inch 800 x 1,280 LCD to the right of the keyboard and features an integrated digitizer layer to enable stylus support. The machine runs an interesting version of Windows 11 that offers several more orientations, in addition to the typical snap shortcuts that you see when you hover over an app’s title bar. 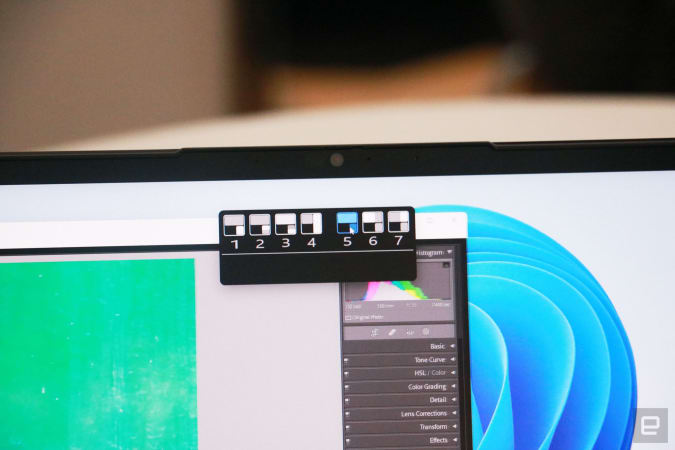 Cherlynn Low / Engadget
On the ThinkBook Plus, when you drag an app, a small dialog box pops up with two suggested layouts (and five more appear when you hover over an arrow here). Windows 11 will just see the 8-inch LCD as an external screen and push out content the way it would to your connected monitors. You can choose to snap a window to take up the whole bottom panel, half of it, cover the entire top display, take up only two thirds of it and more. The most unconventional of these layouts is something Lenovo called “waterfall” where an app can spill over the top screen into the bottom, which could be nifty for extra long lists.

I dragged a long spreadsheet into waterfall mode, for example, and could see entire columns at a glance. Or say you’re watching a live-changing Ted Talk up top and want to jot down notes by hand. Writing on the demo unit was surprisingly smooth with satisfying latency. I also appreciated the position of the pad because it felt more intuitive than trying to draw on a laptop’s display.

During my hands-on, the ThinkBook Plus was responsive at snapping apps where I wanted them to go and did so quickly. But it struggled when launching some other functions that Lenovo built into the lower display.

There’s a whiteboard tool that turns the panel into a notepad, as well as a digital numpad. With supported apps like Adobe Lightroom, you can also have a dedicated dashboard of shortcuts or a magnified view sitting next to the keyboard. Lenovo made a “Magic Launcher,” which is a row of buttons at the bottom of this screen for quick access to the whiteboard, numpad and other specialized software. 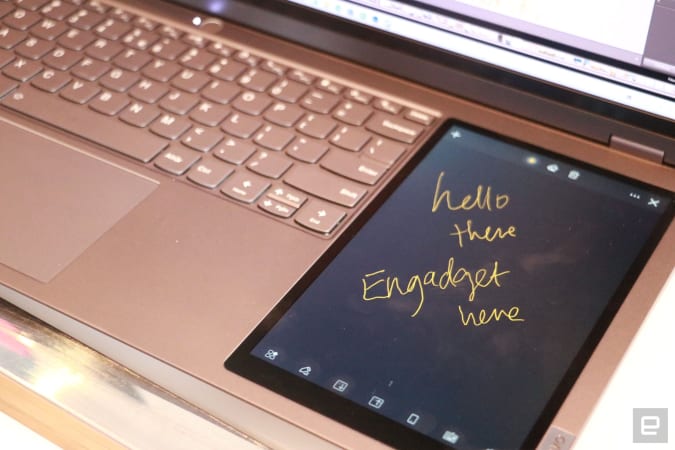 Cherlynn Low / Engadget
This was the most buggy part of my hands-on experience. Sometimes, tapping the buttons wouldn’t work (or would take more than a few seconds before anything happened). The demo unit crashed at least once, too. But we’re at least a few months away from May, when Lenovo expects to sell these machines, so it has some time to iron out these kinks.

The rest of the system performed as expected. The main 17.3-inch IPS display runs at 3,072 x 1,440, which is an aspect ratio of 21:10. It’s easy enough to split three apps on that roomy screen, though if you want to use all of it for editing pictures in Lightroom, at least you can keep an eye on Slack or Twitter with the bottom display.

Keeping all this running is a 12th-generation Intel Core processor with up to 32GB of DDR5 RAM. It uses Intel’s Xe graphics with Unified Memory Architecture, which should be powerful enough for some photo editing. There's also a Full HD IR camera with a privacy shutter and an array of ports including an HDMI socket, two USB A jacks and a Thunderbolt 4 connection. 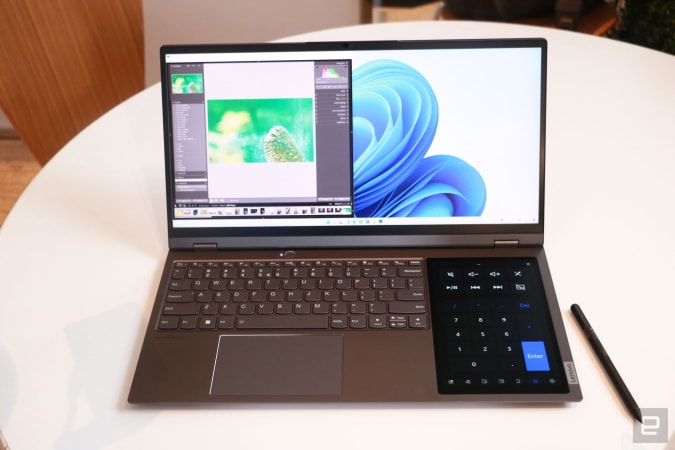 Cherlynn Low / Engadget
It’s worth noting that the battery size here is 69 Whr, which is pretty typical for most laptops this size. But most laptops this size don't also have a secondary monitor to power, so we'll have to wait till we can test one out for ourselves to get a sense for real-world endurance. You'll only be able to get these in May, and they'll start at $1,399.

Lenovo also announced a slew of other products in its ThinkBook and ThinkCentre family of business-minded devices. There’s the updated ThinkBook 13x Gen 2, which can work with a “Wireless Multi-Device Charging Mat” that recharges Qi-compatible gadgets while also powering the laptop itself. The company also debuted a new ThinkCentre Neo line comprising three desktop systems for small and medium businesses. Finally, the new ThinkBook 14 and 16 Gen 4+ i (yes, that’s part of the name, not a stray letter) sport 16:10 screens running at 90Hz and 120Hz respectively, among other updates.

The ThinkBook Plus Gen 3 is one of the most eye-catching things I've seen this CES, though that’s not to say Lenovo is breaking new ground. ASUS has already made several dual-screen laptops in its ZenBook Pro Duo series, and Lenovo itself also tried before with the ill-fated Yoga Book line. Dell and Intel have shown off some concepts, too and I'm very intrigued by the premise here. With Windows 11’s release last year, it seems like more PC makers could be ready to deliver real dual-screen laptops and we could see more of them in 2022. As a taste of what’s to come, the ThinkBook Plus Gen 3 is tantalizing and I applaud Lenovo for continuing to try and innovate. 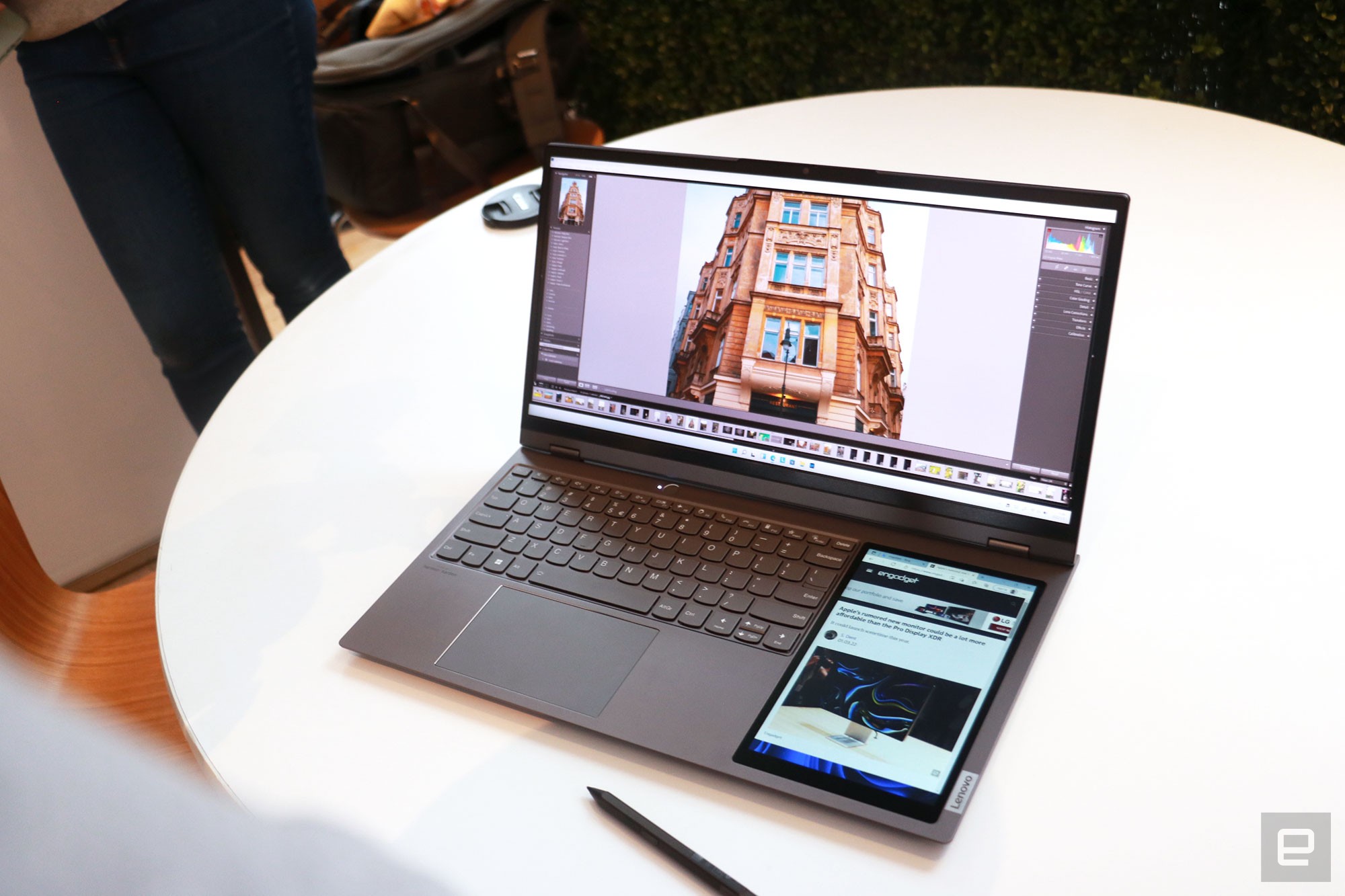 Lenovo's $1,399 ThinkBook Plus Gen 3 has a second 8-inch screen next to its keyboard.

Last edited by a moderator: Jan 6, 2022
Reactions: silversurfer, Gandalf_The_Grey and harlan4096
You must log in or register to reply here.