Firefox users have two main options when it comes to file downloads on the Internet. They may download files to the local system or select an application that they want the file to be opened with. Files need to be downloaded in both cases, but how they are handled is different currently.

A torrent file can be linked to qBittorrent or another torrent application to load it directly in the program, a spreadsheet in Excel or LibreOffice Calc, or a video in a dedicated video player.

One issue that Firefox users may have experienced in the past is that files that are opened in applications directly are not put into the download folder. Instead, these files are placed in the temporary folder. The downloaded file gets removed automatically from the temp directory when the session is closed.

Means in worst case: users may run searches on their systems to find the downloaded file but won't find it. They need to redownload it before they may access it again. On Bugzilla, Mozilla Firefox's bug tracking site, bug 1710933 -- LaunchWithApplication download should be moved to the "Downloads" folder when finished -- confirms the change.

File downloads are placed in the downloads folder by Firefox starting with the release of Firefox 91; this is true for direct downloads, just like before, but also files that get launched in applications directly by the user.

The placed files won't be removed anymore either, when opened in applications, after the last session is closed.

Google's Chrome browser uses the same logic when it comes to file downloads and the opening of downloaded files in applications directly. All files are placed in the download folder regardless of whether they are direct downloads or configured to launch in applications.
Click to expand...

Mozilla attempts to address the "where is the downloaded file" issue that some users of the browser experience when opening files in applications.

Downside to the change is that some users may clear downloaded files manually. Some files may not be needed anymore after they have been opened in an application. Torrent files may be a prime example of such file types.

Customization options could introduce a solution. Make the saving of files opened in applications the default, but give users options to disable the saving for individual files or file types; this way, users would get the best of both worlds. 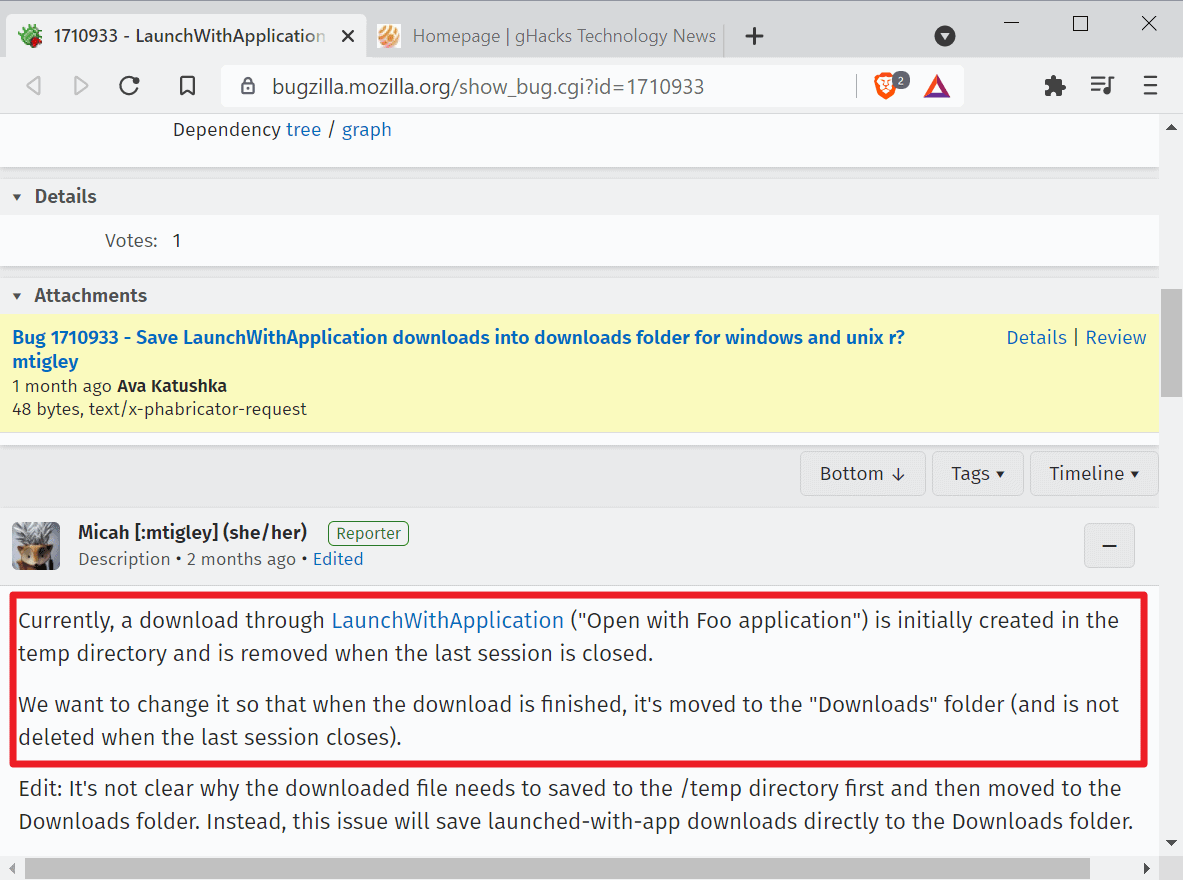 Firefox will soon save file downloads to the downloads folder even if these files are configured to launch with an application after the download finishes.
www.ghacks.net
Reactions: oldschool, Zartarra, Vasudev and 10 others
C

when will this update come through on the Firefox update sever?

carl fish said:
when will this update come through on the Firefox update sever?
Click to expand...

Version 91 is scheduled for release on the 10 August.
Reactions: oldschool, Venustus, CyberTech and 5 others

carl fish said:
when will this update come through on the Firefox update sever?
Click to expand...

"gHacks" wrote July 27, 2021 but that looks like may be wrong information:

Starting in Firefox 91, Firefox uses a different logic when it comes to the opening of file downloads. We reviewed part of the ne behavior in June, namely that Firefox will save all files to the downloads folder regardless of whether users select the save option or the open option.

One consequence of the new behavior is that downloads that are opened are not deleted anymore automatically. It is necessary now to clear these downloads manually.

That is not the only change though. Firefox 91 will introduce functionality to open files from the download panel. The download panel displays all downloads, active, failed or completed, of the session. If you run Firefox 90 or earlier, you may have noticed that you cannot click on a download that is in progress to get the file opened as soon as the download completes.

Firefox 91 introduces that option: just click on the download and Firefox will display the remaining time before the file is opened on the system.
Click to expand...

Mozilla plans to change the file download opening behavior in Firefox 91. Find out what changes and how to undo the change if you prefer the classic behavior.
www.ghacks.net
Reactions: oldschool, Venustus, upnorth and 4 others

Update Mozilla Firefox 98.0: here is what is new