Mozilla is now showing ads in the form of sponsored Firefox contextual suggestions when U.S. users type in the URL address bar.

Mozilla says the feature was introduced with Firefox 92 in September to fund development and optimization.

"Beginning in Firefox version 92, you will also receive new, relevant suggestions from our trusted partners based on what you're searching for. No new data is collected, stored, or shared to make these new recommendations," Mozilla says

While blog posts [1, 2] presenting it under the "Firefox Suggest" name were published in September, it was first mentioned in a Firefox changelog with the release of Firefox 93 two days ago and presented as a "faster way to navigate the web."

"Firefox Suggest is a new discovery feature that is built directly into the browser. Firefox Suggest acts as a trustworthy guide to the better web, surfacing relevant information and sites to help people accomplish their goals," Mozilla said at the time.

"Firefox Suggest will enhance this by including other sources of information such as Wikipedia, Pocket articles, reviews and credible content from sponsored, vetted partners and trusted organizations."

Mozilla says it will only work with partners that meet Firefox's privacy standards, with the preferred partner for now being adMarketplace.

Mozilla says on its support site that these suggestions will only be enabled after users provide access to new data types by clicking "Allow suggestions" when prompted or by manually choosing the types of suggestions that will be shown from settings.

To toggle Firefox Suggest and change the types of suggestions showing up at any time, you have to click the menu button and go to Settings > Privacy & Security on the left, and then go down to the Address Bar — Firefox Suggest section.

To enable or disable contextual suggestions, select or deselect the checkbox next to Contextual suggestions. To toggle traditional address bar suggestions like Firefox Suggest results from browsing history and bookmarks, you will have to check or uncheck their associated checkboxes.

However, while Mozilla describes Firefox Suggest contextual suggestions as opt-in, in BleepingComputer's tests and from what users have reported [1, 2], the feature is on by default.

The only way Firefox users will know whether a sponsored suggestion is an ad would be by looking at the URL, but, in many cases, the URL is not clearly visible.

No PII data shared with partners

When Firefox Suggest is enabled, users' search queries are sent to Mozilla servers, and the clicked suggestions to partners via a Mozilla-owned proxy service.

"The data we share with partners does not include personally identifying information and is only shared when you see or click on a suggestion," Mozilla said.

Right now, Mozilla says it collects the following info to power its Firefox Suggest service when users opt-in contextual suggestions:
In this blog post, you can find additional information on how collected data is handled and shared by Mozilla with its partners.

This newly added feature is likely an effort to diversify Mozilla's revenue streams, seeing that most of the organization's yearly revenue comes from a deal made with Google in November 2017 to make Google's search engine the default search provider in the United States, Canada, Hong Kong, and Taiwan.

Mozilla has also introduced sponsored tiles (aka sponsored shortcuts) on the default home page and the New Tab page in Firefox to promote content provided by advertising partners (Mozilla gets paid only when users click on the displayed tiles).

adMarketplace is also the preferred partner for the sponsored tiles feature as it meets Mozilla's privacy standards for Firefox.

Firefox currently has 3.67% of the browser market share worldwide, compared to Google Chrome's 65.15% and Apple Safari's 18.4%, according to Statcounter's GlobalStats.

A Mozilla spokesperson was not able to provide a comment before BleepingComputer published the article.
Click to expand...

Mozilla is now showing ads in the form of sponsored Firefox contextual suggestions when U.S. users type in the URL address bar.

The feature is definitely on by default. I noticed it and immediately disabled. I think it's interesting how well Mozilla was trying to hide the button.
Reactions: SeriousHoax, The_King, Nevi and 2 others

SpiderWeb said:
The feature is definitely on by default. I noticed it and immediately disabled. I think it's interesting how well Mozilla was trying to hide the button.
Click to expand...

Just like most other browsers, new versions often come with new "features" enabled. Just today I found one in Edge. Same with Brave, et. al.
Reactions: SeriousHoax, The_King, silversurfer and 4 others

This is in Firefox for a longer period of time, but them being ads is new to me. I know that the suggestions used to use Google, or some other engine of choosing, to generate suggestions based on what you typed. If you typed in a country name, then you would get suggestions "<country> currency" or "<country> time" for instance with a magnifier glass icon in front of it, but no URL just generated search terms.

Edit: i always disable this function, since it was just cluttering up my URL bar.
Reactions: SeriousHoax, Nevi, oldschool and 3 others

As long as we can remove them - no problems.
Reactions: SeriousHoax, silversurfer, Nevi and 3 others

This is kind of sad. I currently switch between using Edge and FF. Being a smaller scale browser it makes sense that they are trying to squeeze extra $ to try and compete with the big boys..

Well they are trying to scramble for revenue as their user base shrunk a lot in the last couple years. Can’t blame them.
Reactions: SeriousHoax, silversurfer, Nevi and 1 other person

blackice said:
Well they are trying to scramble for revenue as their user base shrunk a lot in the last couple years. Can’t blame them.
Click to expand...

I can't either. It's called "business", whether non-profit or for.
Reactions: SeriousHoax, plat1098, silversurfer and 2 others

Well, I saw kind of ads even in other browsers. Edge's startpage shows also a few "annoyances" but so far it's possible to disable manually like Brave Rewards...
Probably every browser has pros & cons, all depends what browser suit your needs best
Reactions: SeriousHoax, Nevi, oldschool and 3 others

This feature is not showing on my FF V93. Not that I mind Mozilla making money.
I hope MS started paying them for testing Bing.
Reactions: SeriousHoax, Nevi and oldschool

SpiderWeb said:
The feature is definitely on by default. I noticed it and immediately disabled. I think it's interesting how well Mozilla was trying to hide the button.
Click to expand...

Here it is btw (bottom) 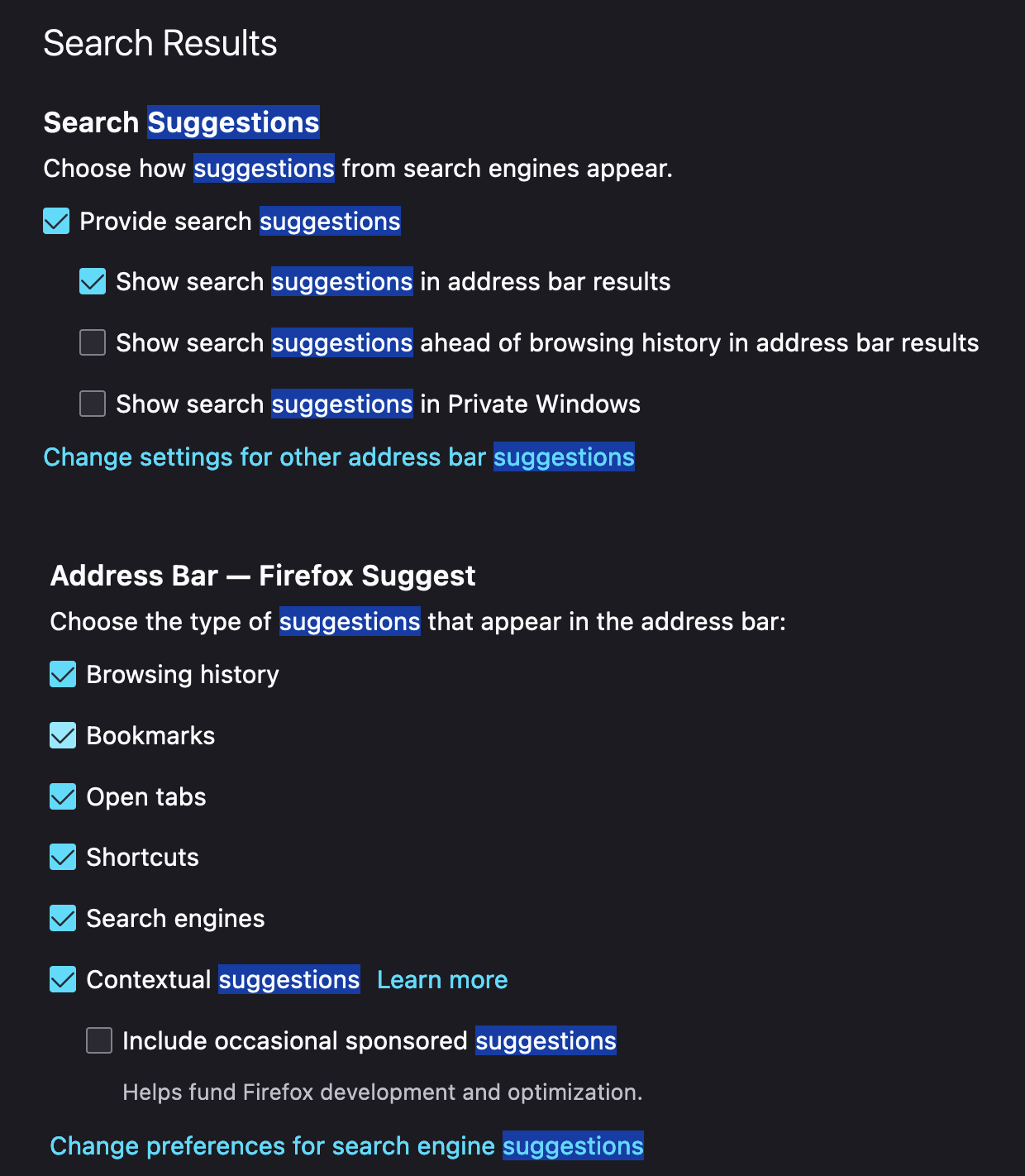 I have FF93 x64 (in Spanish) and I don't have that new setting, in fact my Search Suggestions settings are quite much simpler (as in previous versions):

Reactions: Berny, oldschool, CyberTech and 3 others

harlan4096 said:
I have FF93 x64 (in Spanish) and I don't have that new setting, in fact my Search Suggestions settings are quite much simpler (as in previous versions):
Click to expand...

Reactions: oldschool, CyberTech, silversurfer and 2 others

It seems not fully delivered or maybe only in some country regions or just they are making “an experiment” to check how FF users will reaction about this new setting...

Reactions: Berny, oldschool, CyberTech and 3 others

That's why I said it's hidden... smh. Firefox is not being transparent with this.
Reactions: oldschool, silversurfer, Nevi and 2 others

Yeah, I knew You would suggest that, but I had already tried that option, and still no success, this is what I get: 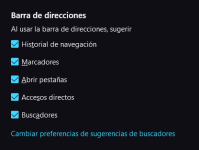 So no, my FF93 does not have that new setting for now…
Reactions: Berny, oldschool, silversurfer and 3 others

harlan4096 said:
Yeah, I knew You would suggest that, but I had already tried that option, and still no success, this is what I get:

So no, my FF93 does not have that new setting for now…
Click to expand...

The plot thickens! Someone on reddit said Mozilla is A/B testing and ads are only in the US version of Firefox... I will bite. I bet Mozilla only enabled ads for new Firefox users like me. Current Firefox users are probably by default off/hidden so there won't be backlash.
Reactions: oldschool, CyberTech, plat1098 and 4 others

SpiderWeb said:
The plot thickens! Someone on reddit said Mozilla is A/B testing and ads are only in the US version of Firefox...
Click to expand...

This is nothing new for Mozilla and many other companies in various industries. I got the International English version installed, aka British English, and it's not available in there. It was however available in the en-US version as usual, in my VM environment. The en-US usually gets the first test round of features, since that is the "base" version Mozilla uses themselves, being headquartered in the state of California.

In other industries the same situation has been applied as well, in example think of Microsoft, for various reasons. One can be userbase, another can be lingual or legal accessibility etc...
Reactions: oldschool, The_King, CyberTech and 1 other person

Here it is! I'm in the Northeastern United States.

And yes! It's enabled by default. I keep it enabled also. I haven't seen anything drastic so far but I use Firefox's Search function rarely. You CAN disable it obviously. Up to you but you have to be aware of its presence first and that's a question mark for mainstream Firefox users.
Reactions: harlan4096, silversurfer, oldschool and 3 others

In Privacy & Security settings, scroll down to the “Address Bar — Firefox Suggest” section and uncheck both “Contextual Suggestions” and “Include occasional sponsored suggestions.”

After that, close the settings tab. Sponsored suggestions will no longer show up in the address bar results.
Click to expand...

How to Turn Off Suggested Ads in the Firefox Address Bar

Starting with Mozilla Firefox version 93, the browser includes a new addition to the Firefox Suggest feature that occasionally shows sponsored suggestions. Luckily, if you don’t want to see ads in your browser address bar, you can disable them in Settings. Here’s how.

Mozilla brings updates to Firefox on Android and iOS

Firefox Monitor may remove personal information now from the Internet