Were any of you aware of this? New version coming soon with Dark theme! In Beta it seems.

I knew it was coming because they were having sale stating that if you buy v.7 you'll be eligible to use v.8 also when it comes out. Thnx for info.
Reactions: CyberTech, Deletedmessiah, dinosaur07 and 8 others


Minimalist said:
I knew it was coming because they were having sale stating that if you buy v.7 you'll be eligible to use v.8 also when it comes out
Click to expand...

Hope they offer a good upgrade discount.
Reactions: Nevi, Deletedmessiah, Venustus and 3 others

Hope they offer a good upgrade discount.
Click to expand...

Yeah it would be great but frankly I wouldn't mind paying whole price for this great software.
Reactions: Nevi, SomeRandomCat, Deletedmessiah and 7 others

Nice. One of the few pieces of software i'm willing to buy. Big fan.
Reactions: Nevi, Deletedmessiah, dinosaur07 and 7 others

Got an email today with 20% off which is the usual discount Macrium give.
Reactions: Nevi, Deletedmessiah, Ville and 3 others

Macrium Reflect 8 will be released in March 2021; reason enough to take a first look at the latest beta version of the popular backup software and to find out what the update has in store for its users

Macrium Reflect 8 is the next major version of the backup software. It will be released as a free version and a commercial version, and features a number of important changes and additions.

One of the first changes may become visible right after start, e.g. after a new installation or upgrade from a previous version: the application supports dark and light theme modes. If you do a fresh install, you will get the dark theme automatically. Users may switch between the two themes from Other Tasks > Change Theme. [...]

Plenty of things have been improved under the hood. Support for ReFS and ExFAT file systems has been boosted in the new version. While you could backup partitions with these file systems previously, previous versions of Macrium Reflect would do a sector by sector copy of the disk. The release of Macrium Reflect 8 changes the behavior. Instead of copying everything and creating large backups, only used clusters are copied in the backup process; this speeds up the process of creating images and also the space the backups occupy on the storage device.

Macrium Image Guardian, a security feature that protects backups from ransomware attacks, will protect backups stored on ReFS or ExFat systems in the new version on top of that.

Macrium Reflect 8.0 includes a new driver to mount File and Folder backup files. The new driver supports a maximum file size of 3.9 TB, the previous driver supported a file size of up to 4 GB only. Additionally, it is now possible to mount File and Folder backups in Windows Explorer if the size of the backup exceeds 4 Gigabytes. While you could create backups that exceeded 4 Gigabytes in previous versions, Macrium Reflect would split those backups in multiple parts and that prevented the backups from being mounted. Previous backups are supported by the new driver.

The workflow for adding new folders to File and Folder backups has been improved; users may use drag & drop to add folders, or the "add source" option.

Another new feature improves the backup software's clone and restore functionality. Both activities support automatic fill and shrink operations if the target disk has a different size than the source disk. Users may set the free space before and after a copied partition manually if desired.

The Restore tab has been renamed to Existing Backups in Macrium Reflect 8.0. New functionality has been added to the function, including the ability to sort files and view them in the context of the backup set, and to locate and view backup logs.

Macrium Reflect 8.0 introduces support for Oracle VirtualBox and users may switch between Hyper-V and VirtualBox modes. Macrium recommends VirtualBox 6.1.4 or newer as previous versions cannot be run on Windows if the Microsoft Hyper-V service is running.

The new version of the backup program supports the imaging and cloning of USB Flash drives. Drivers can be cloned and backed up like internal hard drives in the new version.
Click to expand... 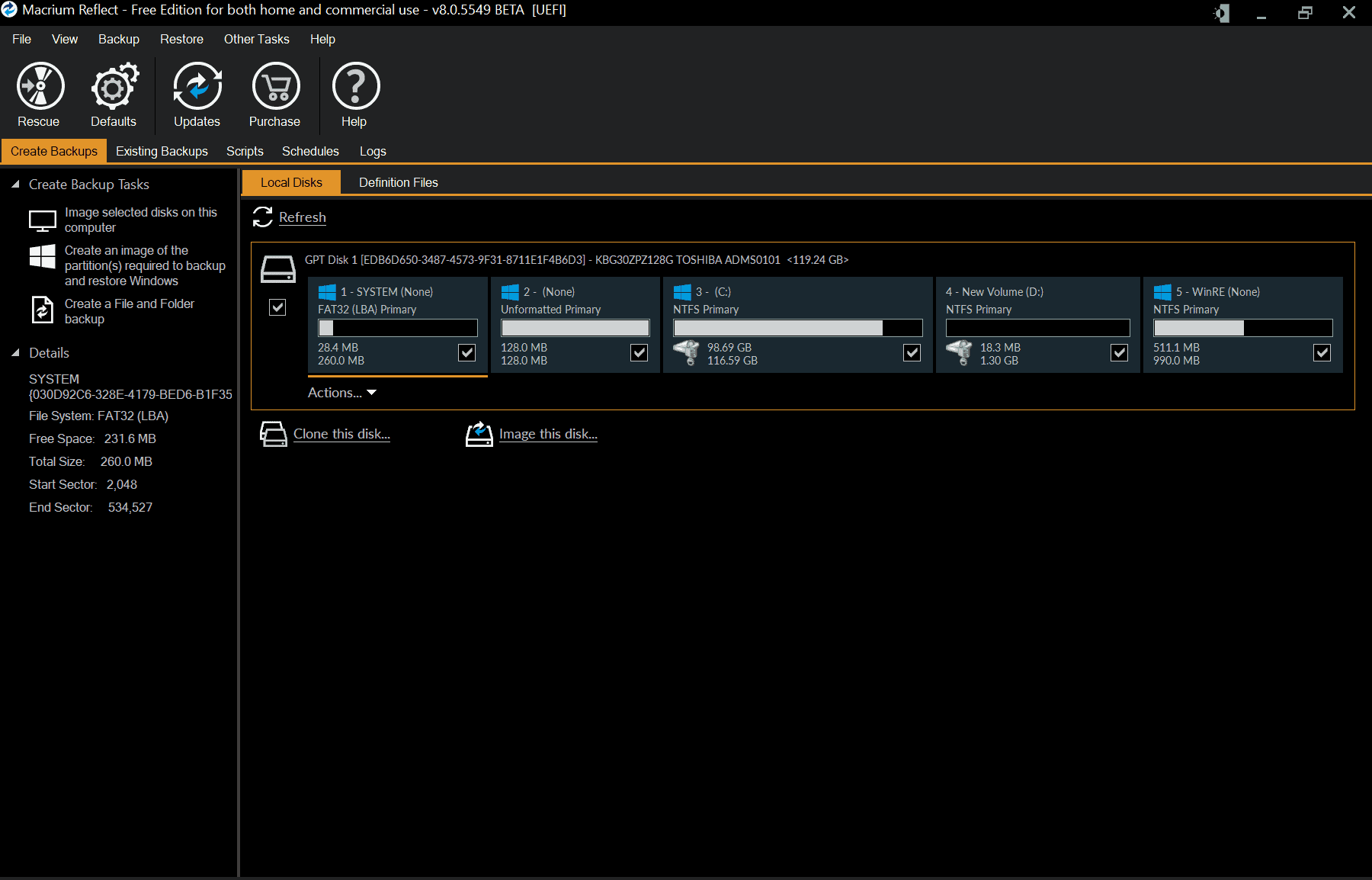 A first look at Macrium Reflect 8, a new major version of the backup software that will be released in March 2021.
www.ghacks.net
Reactions: Nevi, Venustus, Tutman and 11 others

My excitement is real. I mostly manage my backups early first thing in the morning when it is dark. Macrium Reflect 7 burns my retina.
Reactions: Nevi, rain2reign, Venustus and 5 others

I would just love it if they stopped trying to sell me extra licenses I don't need and just sent me an "upgrade early "offer
Reactions: Nevi, dinosaur07, Venustus and 1 other person

Update ChromeOS 104 is rolling out with a new dark theme, and automatic transitions