So I have tried the main guides for removal. when running fubar I did not t get a REMOVAL list. there should be one.... so I am assuming malware ate it. it has created like 7662 new security events since March 27th and crated many admin new accounts ripped up virus software or prevented it from being installed. I have been trying to do it myself self but I am forced to admit that I cant. Any help would be greatly appreciated. oh and it was able to alt my win 10 install DVD I did (not finalize it during/after creation. now when I try to use it tells me that it needs drivers to install./ I thought that I had finalized it but I guess not. never seen that before! OK, soo here we go to the main event. this has been going on for a while. I do regular backups and HAD rescue media via DVD and bootable USB's

So .........
once upon a time in a land far away ...... I noticed a system slow down and started to poke around and see what was going on. I was running windows insider fast lane os usually. so errors happen. so after checking I found that I had a serious problem. guess my stats would help

So I tried to get help form bleeping computers as I have used their sight in the past for info. you can see it here virus malware problem out of control Its fast 10G of new data less than an hr - Virus, Trojan, Spyware, and Malware Removal Help

The long and the short of it was that **** wasssss crazy! it destroys any antivirus and malware program in installed if I could get it installed and seamed like it was adaptive for instance I could not install fubar. I would try and there hours later it was still at 3%... (This is Now when I run it goes into a loop. checking for updates it completes and starts again. when I put it into airplane mode and run it I get past that and it scans.. after it finishes and starts to generate the text doc I get asked says that it does not exists do I want to create one now. Now I've already reset the hard drive wipe it completely out. Used sfc, chkdsk, dism, and finally when I finally had enough I used diskart clean all to wipe the drive. It's a 1 terabyte drive so I took a while. I did notice this time when I wipe the drive reformatted and everything that I didn't have as much space as I used to it show me available space that was about a hundred gigs less that I should have. I tried everything I could think of to get it back clean realigning the drive couldn't find anything anywhere online for help I did just check the disk for any errors. Finally gave up on it reinstall Windows from fresh download from Microsoft ', Windows 10 ISO 1909. I install Malwarebytes 360 Total Security I ran Malwarebytes I ran CC cleaner, Iran Spybot Search & Destroy Iran's location 360, RogueKillerCMD, McAfee Real Protect, McAfee Stinger, Malwarebytes, Zemana AntiMalware, Zemana AntiMalware, Windows Defender, Windows offline, Windows malicious software removal tool, Adwcleaner, Microsoft Anti-Malware Signature Package, Microsoft Anti-Malware Signature Package, Microsoft Anti-Malware Signature Package, Microsoft Anti-Malware Signature Package, some pooSysRescue CD , it just goes on and on so all the major stuff to no avail.

So here are some of the attributes that it exhibits.

1) if you open task manager there are all kinds of things that are running.

Ok, the other things that make them stand out are that the service that does not have the "extension" is always stoped and the one with is set to manual trigger, there is no PID. In some cases the command line is blank or the description is missing or the command line is ridiculously long. if you try to change anything in the property of the second on it will not allow you for instance if wanted to change the service to auto instead of the manual trigger it books me and says "the parameter is incorrect. 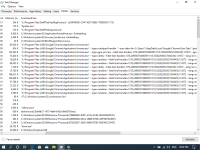 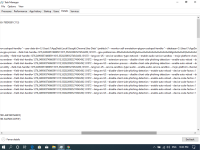 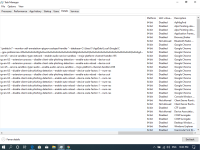 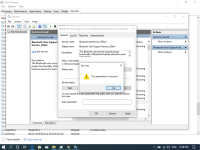 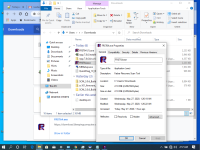 2)event Viewer
ok so there will be 3000 to 4000 new security events on a new install of windows there are sometimes hundreds of reading of security credentials in ONW Second until it is able to create a new user. this new user will have rediculous privileges. There are errors for a defender or any other security software for downloading[ update or running a scheduled times.. 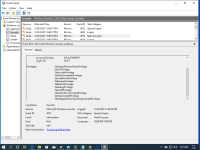 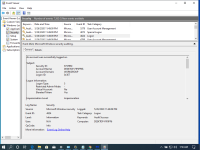 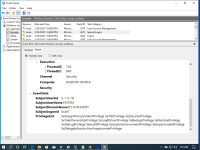 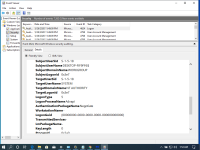 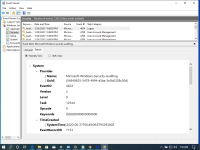 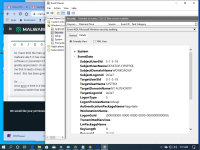 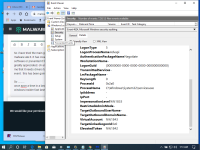 3) if you go to C:\Program Files\WindowsApps\ there is a duplication of every folder with the ëxtention __kzf8qxf38zg5c 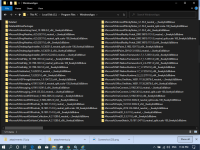 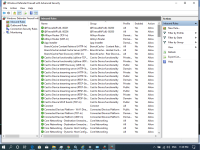 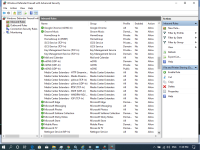 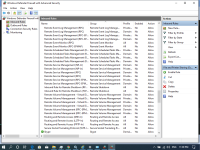 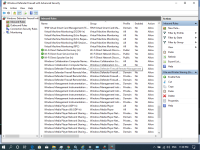 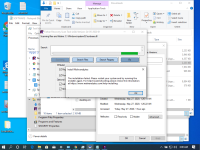 And I can go on and on

I have found other instances of this problem. but most of them did not see in the scope that I have . here are[ some references that I have found
Need Help with Pesky Virus
Error message popping up frequently, even when no Office program is running
Virus...please explain this virus and what it can access
Solved - Possible Virus? Weird computer problems
https://www.bleepingcomputer.com/forums/t/628255/possible-win32delalotwin32advancedcleaner8wekyb3d8bbwe

Please Attention to this thread. This person is experiencing the same things that I and gives more details but it is almost a mirror of my problem down to the habits of the malware

Is there anyway to get rid of a unknown virus?

I am having a problem with what appears to be malware or virus. Symptoms: Multiple Entries Recycle contains multiple Recycle Bins with the Recycle Icon, but the main looks like a folder and is
answers.microsoft.com

I have done reinstalled windows and doing all the stuff in the first section of this post I found that it has also corrupt the pre-boot and the ""x-drive"" so all I am doing is reinfecting my self.

I am in an isolated area of OR and after my second computer went down with the same thing while I waS TRYING to fix the first one. i am assuming that it implanted its self on a USB drive I was using to load clean programs on the infected machine. possably hiding in sector 0 or mbr OR bios. SO that's the quick version.

hear things that happened when trying to remove it

WHEN I WAS TRYING FUBAR:
So it has created aa bunch of loops for me and any program to trave down. To say that it was interesting would bed an understatement. Took ME A bit to figure how to get the feaking thing installed and running before it got neutered. I hid it "outside" of windows and got it to run it found me before it was done with the reports and kept deleting them..And then the battle began to get them out of the computer. it blocked me form sending them via email browser was just spinning so I tried wifi direct i don't even know how it made ENTIRE NETWORK AND INTERNET SETTINGS networking vanish like that like everything I'm thinking the registry. blue tooth and usb no go. so[ i riped the hard drive out running and got them like that. I put reinstalled it is doing just fine getting bigger. here are a couple of shots of the loops and such. 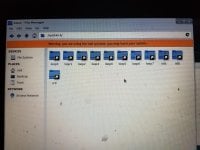 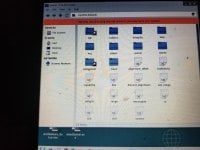 SO WHER DO I GO FROM HERE

fdsearchandrescue said:
So I tried to get help form bleeping computers as I have used their sight in the past for info. you can see it here virus malware problem out of control Its fast 10G of new data less than an hr - Virus, Trojan, Spyware, and Malware Removal Help
Click to expand...

They said it was not a Malware problem.


nasdaq said:
The more I read your information and the review of your first logs from the Farbar program were no malware was found i think that your problem is not caused by malware.

This Forum is for problem with Malware/virus etc...
Click to expand...

I know that I have "getsearchredirect" but I can't get rid of it. I think it's a Bing + Edge thing.