Quote : " Microsoft announced yesterday that it will make changes to the storage plans of its online file hosting and synchronization service OneDrive and to OneDrive storage given to Office 365 subscribers.

The changes affect existing users of the service as well as future users. Several of the plans provided by OneDrive or other Microsoft services that provide access to OneDrive as a bonus are downgraded.

These changes are necessary according to Microsoft because the system has been abused by a small number of users who used more than 14,000 times the average quote.

Anyone seen these changes in there OneDrive accounts?
Last edited by a moderator: Nov 10, 2015

Verified
Trusted
Well this is certain a concern for me... hopefully this won't affect camera roll bonus or Bing bonus. 5GB is crap and would mean I'd lose about 3/4 of my files.

So far nothing has happened. 15GB for free, 15GB for camera roll along with the 100GB for 2 years from Bing rewards. If it didn't affect camera roll, that would leave me with 20GB which still isn't enough. As you can see I'm using 23GB of space for personal files. Lately Microsoft is really testing my loyalty toward them... man, ever since they got new CEO they started to suck bad.

The camera roll bonus of 15GB will be discontinued
Click to expand...

As long as they don't screw up the Bing bonus, I'll be fine for 2 years...

What happens if you don't reduce excess storage during the grace period?

This is nice of them I guess... I guess they are doing this crap due to abuse and like most idiots, they will punish the innocent instead of cracking down on abusers... just terrible parenting. (stupid joke)

My Box account has 50GB (due to Apple account) but only gives max file size of 250MB (useless for me). Google Drive only gives 15GB (useless). MEGA isn't too bad. 50GB, large max file support but limited bandwidth (I've never seen the bandwidth meter move past 0 though lol - I literally have no idea how much bandwidth I was using because of that). Go with MEGA and next thing I know they are shutting down or something.

Verified
Trusted
The reason I registered from their free storage where due to their very good starting free space however that shouldn't a problem as my external HDD is handy for all matter.

Still not a bad offer compare to other same competitors + Microsoft is a big company as surely OneDrive is not on the plan for discontinue.

Verified
Trusted
I think i will just stick to using my portable HDD's for my backups and data.

Verified
Staff member
So I will lose 25GB of free storage? Thanks Microsoft!
It's time to migrate my Music away from OneDrive, the Groove (free music streaming) dream didn't last long. OokamiCreed said:
As long as they don't screw up the Bing bonus, I'll be fine for 2 years..
Click to expand...

What happens if I have extra storage from a promotion or some other offer?
The storage you have as part of other promotions is not affected by this change.
Click to expand...

Verified
Staff member
You can use some of mine,as you can see I dont use it 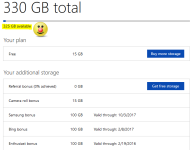 The change was supposed to take place in early 2016
Microsoft recently announced a bunch of changes to its OneDrive cloud service, as it decided not only to discontinue the unlimited space option but also to decrease free storage to just 5 GB.

The company says that it discovered that many of the Office 365 who benefited from unlimited storage actually uploaded movies and DVR recordings, whereas the service was supposed to be used for backups and documents.

It's no surprise that this decision angered users, especially because the amount of free storage is expected to drop from 15 GB to just 5 GB. The changes, however, were planned to come into effect in early 2016.

Unlimited storage no longer available
And yet, there are users out there who claim that Microsoft has already discontinued the unlimited storage option for Office 365 customers. It has all been made silently and without any notification, they claim.

BI links to some complaints posted on Microsoft's very own Community forums, where a number of users claim that although they qualified for the unlimited storage, the option has never been offered.

"I'm subscribed to Office 365 Personal (annual subscription with auto-renewal) and I have now used 950GB out of my 1TB OneDrive storage - and still, my OneDrive storage doesn't increase to 10TB. The one and only reason why I subscribed to Office 365 was the 'unlimited storage' feature. This was so important to me that I have double-checked several times with Microsoft's Answer Desk colleagues who all confirmed and promised that my OneDrive would automatically extend to 10TB as soon as I'd reach 90% of my storage. Now that I have a few GBs left, I'm stuck with 1TB," one impacted user writes.

Many explain that after contacting Microsoft by phone to discuss the issue, they were redirected to the online forums, where no answer has been provided.

We've also reached out to Microsoft to ask for more information on why the unlimited storage option is not available for some Office 365 customers and will update the post should we receive an answer.
Click to expand...

Verified
Trusted
Content Creator
Interesting and especially that people actually belive that something can be " unlimited ". Sure it was Microsoft that clearly stated this and yes it was wrong but common...grow up or atleast try to understand that nothing can really be genuine 100% Unlimited not matter what you pay and no matter what the service is. Belive that BS both online and offline is just plain stupid and the action now from Microsoft hopefully learn it but with some people...nothing gets in no matter what happens or no matter how many tries to say the same thing over and over again. Then again when it comes to leechers and other copyright thiefs that normaly is always those that screams the loudest...I salute Microsoft for there action and deeply hope they kick them in there balls even more!

They have your money, then run. Or, may be they could blame Edward Snowden, I mean even the NSA stated the American cloud companies are taking a pounding after these terrible revelations.

Verified
Trusted
I am currently moving back to Android because I am sick and tired of Windows Phone so I don't really care.
Google Photos - unlimited storage for photos up to 16MP
Google Drive - free 15GB
and I have 50 GB Dropbox and more than 50GB on Copy.com so I can ditch OneDrive.
Tomorrow I will reupload all my photos and docs to Google services and simply stop using MS cloud storage.

How do people use up 50GB - I don't have the patience to upload so many photo's.

Tony Cole said:
How do people use up 50GB - I don't have the patience to upload so many photo's.
Click to expand...

Verified
Time for me to move my PDFs out of OneDrive.
Well, I still have weiyun 3TB. Guess no choice but to use them for now.

Tony Cole said:
How do people use up 50GB - I don't have the patience to upload so many photo's.
Click to expand...

Usually I can easily shoot up 80GB of photo from 5 days shooting photography with RAW image saved. Converting to JPEG in high quality, it's gonna reduced close to 40GB or about that. So I would say it is very possible that 50GB cloud is not enough.

Back those time where flickr offering 1TB of image, ppl are crazily uploading till the point flickr decided to stop that (if im not mistaken).

CMLew said:
So I would say it is very possible that 50GB cloud is not enough.
Click to expand...

For the non-photographer who doesn't store their originals in the cloud, 50GB is more than enough (excluding 4K video files). So the average snapper can use the unlimited storage (compressed) on Google Photos, share directly to Facebook, keep the photos on the device, or backup to PC/External storage.

Huracan said:
For the non-photographer who doesn't store their originals in the cloud, 50GB is more than enough (excluding 4K video files). So the average snapper can use the unlimited storage (compressed) on Google Photos, share directly to Facebook, keep the photos on the device, or backup to PC/External storage.
Click to expand...

I agree. For average/ casual snapper, it's definitely more than sufficient.
You must log in or register to reply here.