Firefox Mozilla may be hinting at premium, ad-free Firefox for $4.99 a month

Verified
In brief: Browsers have always been free, but many think that paid browsers are the future -- especially after Google laid out plans to obstruct ad-blocking in Chromium-based browsers. Now, Mozilla is gauging interest in what is likely the first paid subscription coming to Firefox: ad-free news and articles for $5.00 a month.

No one likes ads, and auto-playing video or audio is the bane of many internet denizens. Yet, income from these ads is what drives a lot of sites and content on the internet -- including TechSpot's. So, despite a decelerated growth in advertising revenue, ads aren't going anywhere in the near term. In the meantime, many users employ ad blockers; others are willing to pay for premium versions of their favorite websites that offer an ad-free experience, among other perks.

Mozilla seems to have a different solution: a premium browser that offers an ad-free experience, and presumably more. We started hearing about Mozilla rolling out paid subscriptions within Firefox last month, and this was after Mozilla suggested it was looking into alternate sources of funding.

A page at Mozilla's website reveals what could be the beginning of a premium, paid version of Firefox. "We share your payment directly with the sites you read. They make more money which means they can bring you great content without needing to distract you with ads just to keep the lights on," the page reads. The aforementioned payment is $4.99 per month.

The idea of browsing the web while retaining your private information, while also evading annoying targeted ads is gaining popularity and traction. The Brave web browser has its own approach, albeit not in the form of a monthly payment. Opera also has its own built in ad-blocking tool.

There's a certain duality in Mozilla diversifying its revenue stream in such a way. It's both congruent with Mozilla's anti-tracking, privacy oriented stance, but also presents an opportunity to experiment with a way of decoupling from the ad-driven ecosystem -- and it's biggest competitor, Google. While Mozilla is still working on the service, it does have a survey for those interested.
Click to expand...

Mozilla may be hinting at premium, ad-free Firefox for $4.99 a month

No one likes ads, and auto-playing video or audio is the bane of many internet denizens. Yet, income from these ads is what drives a lot of sites and content on the internet -- including TechSpot's. So, despite a decelerated…

Basically Pocket Premium mashed with Scroll.com (Info) -- or something along those lines.. 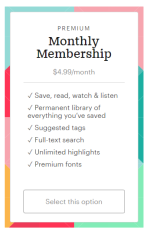 And possibly a top tier bundle with ProtonVPN?

We believe that it may acquire ProtonVPN altogether; the latter is an offshoot of ProtonMail and is based in Switzerland; ProtonMail - as a secure email service - would be a very nice fit for Thunderbird, Mozilla’s email client and ProtonVPN is a well-rated VPN provider.
Source: Mozilla and Firefox could be about to change the VPN and privacy market forever (June 2019)
Click to expand...