cruelsister said:
Actually no such guarantee exists. Although most countries do indeed maintain a gold supply, on average these holdings constitute less than 2% of total money supply. The closest currency to be considered on the Gold Standard is the Tugrik (Mongolia) with about 10-15% of the currency covered.

(Fun Fact- there are actually some cryptocurrencies that are entirely backed by Gold, such as Tether Gold and DigixGlobal tokens.)
Click to expand...

Reserve value of Euro is guaranteed though ECB's coverage rate which consists of dollars, yens, gold and special drawing rights/bonds check it out yourself European Central Bank: 04/2021 The US has a similar system only US does not capitalize gold against market value, but a historical value (has less impact on coverage rate when gold value rises or falls downward).
Reactions: Stopspying, Nevi and venustus

cruelsister said:
Regarding Bitcoin, here is a Podcast from Brian Dunning of Skeptoid (my absolutely favorite):

Although the entire 16 minute Podcast is excellent (as usual), fast forward to the 6:30 mark for the discussion about criminals and bitcoin.
Click to expand...

It is not the criminals (drug cartels, organized crime) that are the problem with cryptos. The real problem is collusion by whales & exchanges and their market manipulation. Crypto markets are essentially lawless where those with the means of capital and capability are financially raping the little guys.

That being said the gambling parlor nature of cryptos will not stop anytime soon. Millennial males with financial means keep throwing money at cryptos, betting everything they own sometimes.

The value of cryptos is based upon a narrative, and a flawed one at that. Something that is nothing, is still nothing.
Reactions: venustus and Nevi

cruelsister said:
The Good- they actually have backups that work
Click to expand...

That was said of Colonial Pipeline in the early days of their attack.

Re:crypto... it is ultimately traceable. There needs to be effort to "follow the money" and execute those involved.
Reactions: venustus and Nevi

JBS, the world's largest beef producer, has confirmed that all its global facilities are fully operational and operate at normal capacity after the REvil ransomware attack that hit its systems last weekend.

The attack on JBS follows another major ransomware incident that forced Colonial Pipeline to shut down the largest US pipeline and pay a $5 million ransom.
JBS is the world's largest beef and poultry producer and the second-largest global pork producer, with facilities and operations in the United States, Australia, Canada, and the United Kingdom.

It has over 245,000 employees worldwide and an extensive portfolio of brands sold to customers from roughly 190 countries on six continents..." JBS, the world's largest beef producer, has confirmed that all its global facilities are fully operational and operate at normal capacity after the REvil ransomware attack that hit its systems last weekend.

JBS, the world's largest beef producer, has confirmed that they paid an $11 million ransom after the REvil ransomware operation initially demanded $22.5 million.

On May 31, JBS was forced to shut down some of its food production sites after the REvil ransomware operators breached their network and encrypted some of its North American and Australian IT systems.

JBS said they paid $11 million to prevent their stolen data from being publicly leaked and mitigate possible technical issues in a statement released last night.

"This was a very difficult decision to make for our company and for me personally," said Andre Nogueira, CEO, JBS USA. "However, we felt this decision had to be made to prevent any potential risk for our customers." JBS, the world's largest beef producer, has confirmed that they paid an $11 million ransom after the REvil ransomware operation initially demanded $22.5 million.

Yes, after the Colonial Pipeline ransomware payment this seemed likely. All in all it seems to me that this is a worrying trend; the likely effort put into these attacks compared to the sums involved in the payoffs is rewarded at levels far above my pay grade. I can see why it appeals as a 'career move' to some. The sums paid out may be small, relative to the businesses' turnovers, but it is a hell of a carrot to dangle as temptation to anyone inclined to try further attacks. Especially when the sums paid to get the relevant tools are so small compared to the 'bounty'. 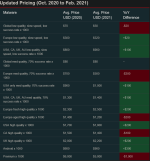 To see just how prevalent items of personal data are being listed on the dark web in 2021, and at what price, we went on a data-gathering mission.

Another take on the JBS ransomware payment - JBS Paid $11M to REvil Gang Even After Restoring Operations

The decision to pay the ransom demanded by the cybercriminal group was to avoid any further issues or potential problems for its customers, according to the company’s CEO.