Although many students and employees are able to work again (for the most part) as they did before the cyber attack, the consequences of the hack are not over yet. The Executive Board therefore asks for some patience and understanding regarding issues that have not yet been resolved. Every day, dozens of colleagues are still working to restore everything as quickly as possible and as safely as possible. This update also includes information about the leniency arrangement for students who have been disadvantaged by the attack and the good news that the schedules for period 4 are available. It's also possible again to register online for an open day.
Click to expand...

From 9 o'clock this morning, students and staff are able to print, copy and scan again from UM workstations. VPN is also up and running, so as of today, people can work safely from home, with secure access to UM servers.
Click to expand...

This is a good case study in the negative ramifications and implications of ransomware.

It is not an easy recovery process for many. It's not just simply going to a backup -- as we as individuals might do.

Thanks for the continuing updates Gandalf.

Thank you for joining our livestream. During this symposium, we will share all of the information regarding the events as they unfolded during the cyber attack. After the livestream, a report will be published and shared online, which will include Maastricht University’s official statements. If you still have questions after the livestream, feel free to write an email to communicatie@maastrichtuniversity.nl. Please add the subject to your email “Question Cyber attack symposium”.
Click to expand...

Was too long for me to watch, but what happened was (according to Dutch media):
The entry point was a phishing mail.
Not all software was up to date.
No offline backups
They paid the ransom of 197.000 euros (30 bitcoin). 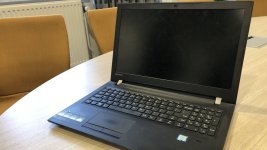 Verified
Always a little cringe inside when I read that the ransom was paid. A very expensive lesson, it seems--almost a quarter of a million US dollars (216,000 currently). Well, what's a university without higher learning? Hope they implemented those lessons and will consistently maintain them.

In short, what happened according to the above articles:
It all started already on 15 and 16 October 2019 with phishingmails, pointing to malicious document.
There were two servers with unpatched OS.
On 21 November the whole network was compromised: 267 servers and 2 workstations.
The hacker needed to use a certain software to roll out the ransomware further. That was detected by a AV.
The hacker then de-installed that AV.
On 23 December the ransomware was rolled out.
Backups were also encrypted.
The UM paid about 197.000 euro (30 bitcoin).
Click to expand...

Verified
Staff member
Malware Hunter
I missed watching the stream so thanks for the video share @Gandalf_The_Grey , but I'm not so sure I actually gonna click it. I'm really disappointed at UM and find it as I said before a disgrace that a University can't protect itself. Incompetent staff perhaps? Maybe the students could have done a much better work.

No matter how exclusive or super rare or even extrem targeted this malware/infection was, with a normal genuine business backup system that is regular used and verified would/should have got their system up and running much faster. But, I don't know how their network actually was/is built and if the ransomware was constant infecting cleaned/new machines. Sounds like that was the case from the quote from Wilders, but I get the feeling the network machine numbers are wrong. Not too important anyway.

You that watched the video, did they mention what main AV they used when they was hit?

Another thing that makes me not wanna watch the video, not now anyway, is that they waited a long long time to spill the truth. That they paid the thieves. Also a pretty big sum. I wonder if their strategy was/is that people will hopefully forget sooner or later that they paid the ransom and instead recall UM as that place that worked their ass off getting everything back.

What needs to be done in order to prevent a repeat?

Vice president of the Executive Board, Nick Bos, informed a full hall of mainly media and IT experts during the so-called ‘symposium’ on the cyberattack, Wednesday 5 February. First, pa...
www.observantonline.nl

“the continuity of the UM” was at risk, he said. “Study progress, scientific research, sustainable security of data, business processes”; with all of this, the UM ran “unacceptable” risks. Because if files are encrypted and you don’t have the key (“decryptor”), how long would it take to rebuild everything from scratch? That could take weeks, even months, experts ensured the Board. Moreover, that would almost certainly mean loss of crucial data files.
Click to expand...

Vice president of the Executive Board, Nick Bos, informed a full hall of mainly media and IT experts during the so-called ‘symposium’ on the cyberattack, Wednesday 5 February. First, pa...
www.observantonline.nl
Curious IMO that something that's with most companies, organisations etc is worth much more then anything is always oddly forgotten when ransom gets paid. The Brand itself and in this case, UM ( Maastricht University ). Trust, is also another keyword.
You must log in or register to reply here.

Security Alert Knoxville Shuts Down Parts of its Network After Hit by Ransomware
Jun 15, 2020
Correlate