The security fixes have not been published yet on the official Security Advisories for Thunderbird website. You may want to check there later to find out if the information has been published.

The release notes are available and you may access them here. The new version fixes several attachment, account setup and saving issues in the email client. 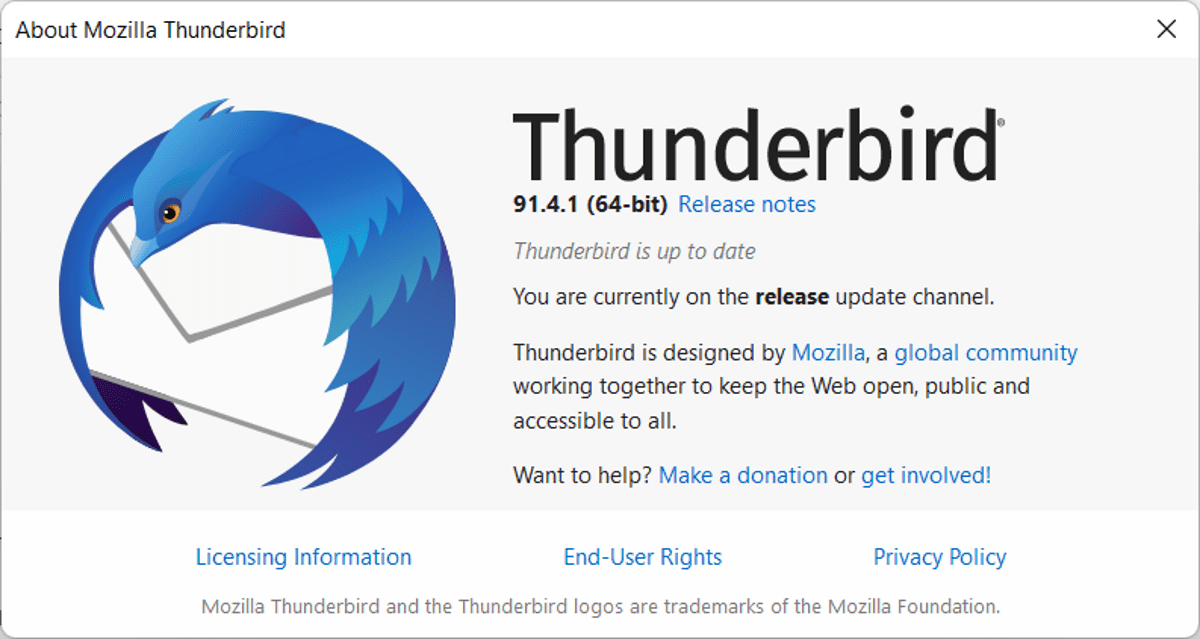 A new version of the open source email client Thunderbird is now available. Thunderbird 91.4.1 is a security update for the email client that includes a good dozen non-security fixes and improvements as well.
www.ghacks.net
Reactions: Andrew999, Nevi, Sorrento and 2 others

The two non-security issues that were fixed address a display issue for RSS keyword labels and missing information on Thunderbird's about dialog page.

The security advisories page for Thunderbird 91.5 lists 14 security issues, many of which come from the code that Thunderbird shares with the Firefox web browser.
Click to expand... 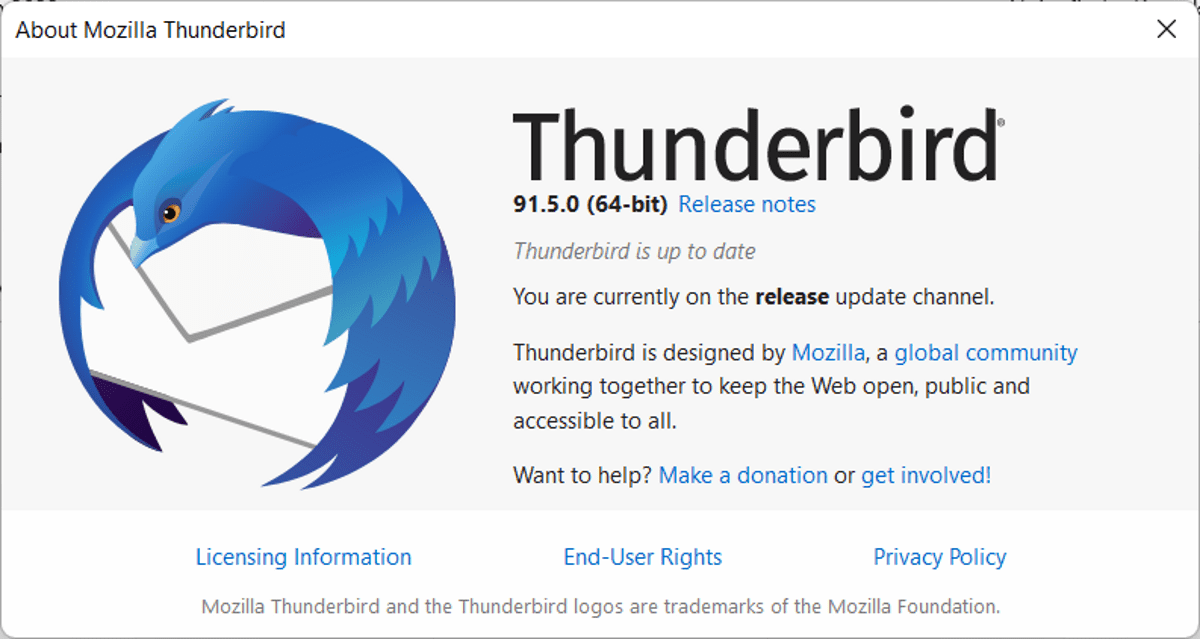 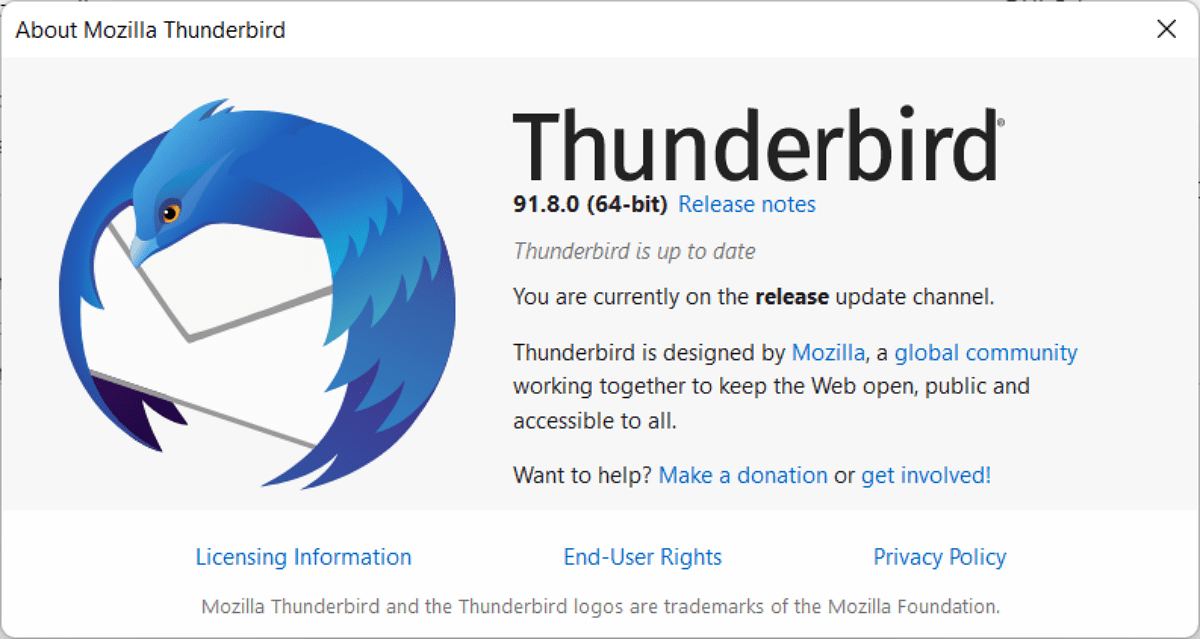 Thunderbird product and business development manager Ryan Lee Sipes confirmed on Twitter that a Thunderbird mobile app is coming soon. The product manager did not provide specifics, only that the mobile app is the second priority after fixing the user interface and user experience in Thunderbird.

In another tweet, Sipes refers to the release of an APK file specifically. APK files are for Android-based devices. While that does not exclude the creation of an application for Apple's iOS ecosystem, it seems likely that the Android app is the first to become available for users.

Additional information is not available at this point. It is unclear if the initial version of the app will be released in 2022 and what functionality it will include. It is almost certain that it will include a core set of features right from the get-go; this may include syncing between mobile and desktop clients, support for multiple email accounts, and an address book.

Some features may be on the to-do list, but it seems unlikely that the first mobile app version of Thunderbird supports all the features of the desktop client. It is also unclear if it will be based on Firefox mobile. If that is the case, it could support extensions.
Click to expand...

Users of the open source email client Thunderbird may soon install it as an application for use on mobile devices.
www.ghacks.net
Reactions: Andrew999, Nevi, user13 and 2 others

The team that is developing the Thunderbird email client has been working on the next major release of Thunderbird for some time. One of the new features of Thunderbird 102 is an improved import tool for data.

Current versions of the email client support imports, but the process is not streamlined. Some imports require the use of extensions, others, including moving data from one Thunderbird installation to another, a copy and paste operation that requires knowledge of data paths and profiles.

The upcoming Thunderbird 102 changes that, at least for some data imports. The team highlighted the new import feature in a new blog post on the official site. The new feature was revealed in late March on Twitter by a development team member, but the blog post reveals new information about the planned functionality.

According to the blog post, Thunderbird 102 comes with a step-by-step wizard that walks users through the process of important data into the email client. The initial version in Thunderbird 102 supports the importing of data from Microsoft Outlook, SeaMonkey and other Thunderbird installations. Future plans to add support for other email services have not been revealed, but there is a possibility that Thunderbird may support additional data sources in future versions.
Click to expand...

Thunderbird 102 to include an improved Import Tool - gHacks Tech News

One of the new features of Thunderbird 102 is an improved import tool for data to improve the importing from Thunderbird, Outlook and SeaMonkey.
www.ghacks.net
Reactions: Emanuel Tomasin, Gandalf_The_Grey, Asterixpl and 1 other person 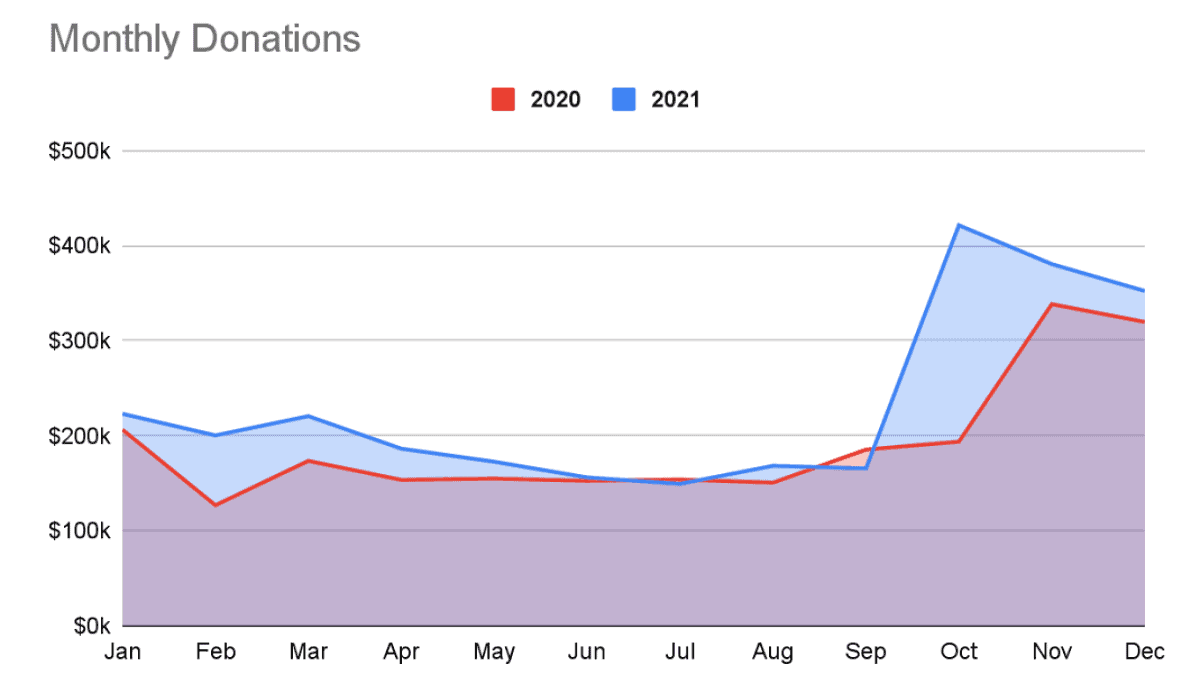 The Thunderbird team published the financial report of 2021 for the Thunderbird project last month. Revenue rose by 21% in 2021 to $2.796 million when compared to the $2.3 million the project earned in 2020.
www.ghacks.net

Improved engagement with donors and an updated What's New page with "an improved donation appeal" were the primary drivers for the increased donations in the year. The team plans to increase the engagement with the entire community in the future. Increased activity on social media sites such as Twitter is already noticeable.

Non-donation income makes up less than one percent of the overall revenue. Thunderbird receives payments when users sign up for the email provides Gandi and Mailfence. New revenue opportunities are explored, provided that they align with the mission and values according to the revenue presentation.

As far as spending is concerned, the bulk is spend as payment for employees. A total of 78.1% is spend on personnel. Professional services, including HR, tax services, and "agreements with other Mozilla entities, make up 10.5% of the spending. 5.5% are spend on general & administrative services, and 4.7% on donation transaction fees.

The Thunderbird project has a total of 18 employees. The team wants to hire several engineers without spending more money than what is coming in.
Click to expand... 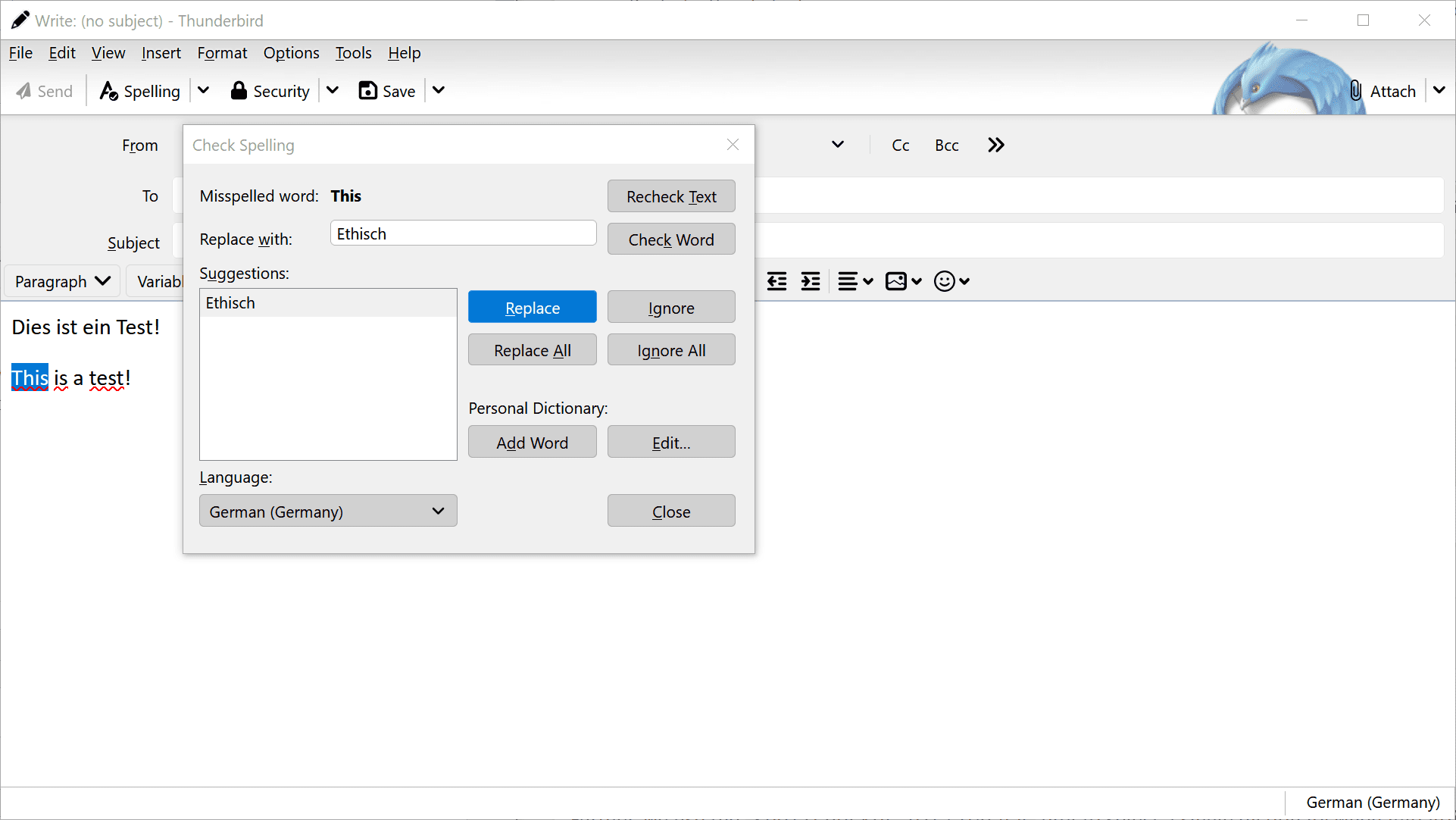 Thunderbird users who speak multiple languages may have had spell checking difficulties in the past. Current versions of the email client support one active language only at a time, and that meant that users either had to switch languages regularly or compose emails without spell checking.

Thunderbird includes a single language by default, but users may install new language dictionaries as extensions. The Dictionaries & Language Packs page on the official Thunderbird add-ons website lists all available options. Once a dictionary is installed, it becomes available under language in the spell checking window of the email client.

Whatever the reason, starting in Thunderbird 102, users of the email client will have the option to use them all at the same time when using the email client.
Click to expand... 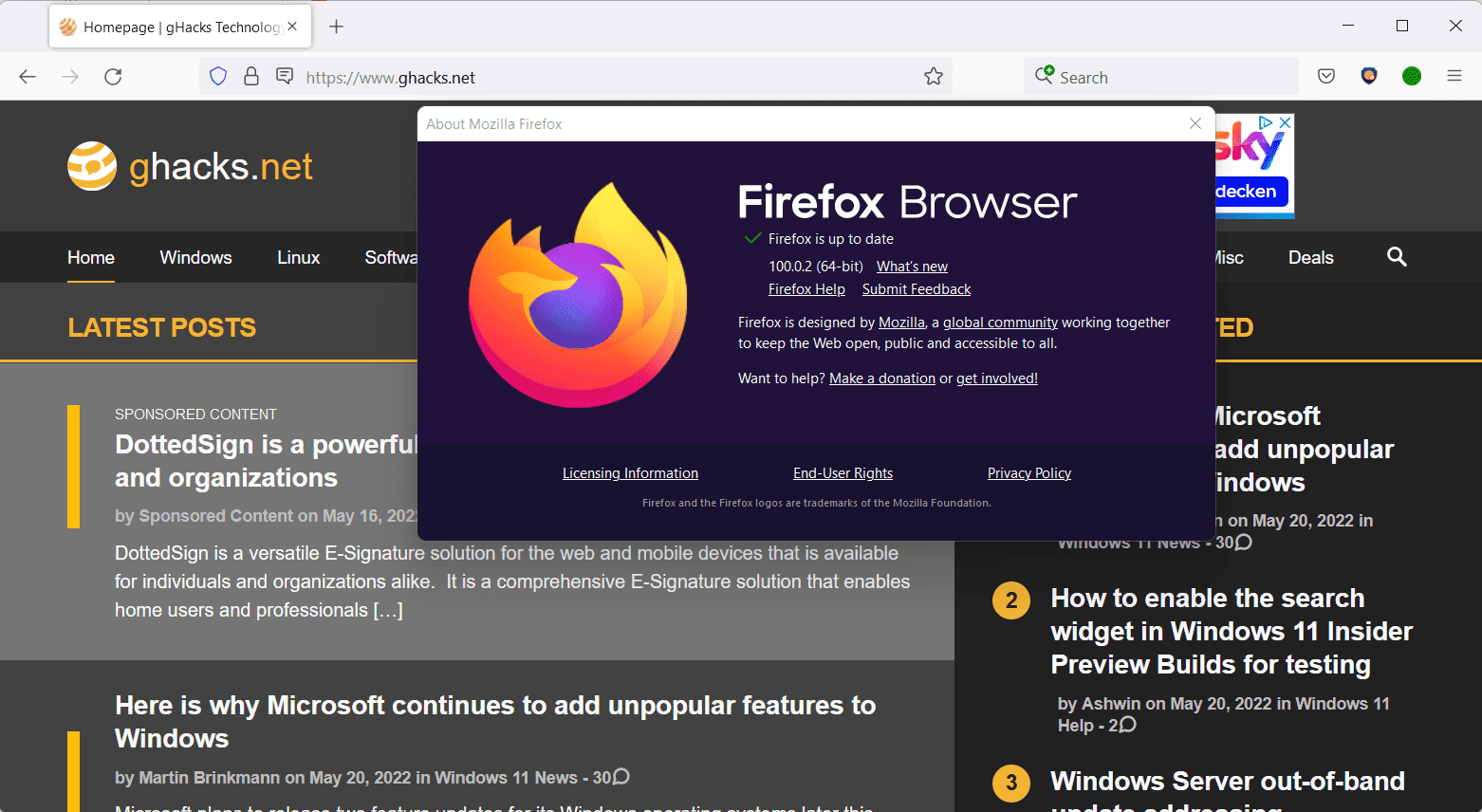 Mozilla published security updates for its Firefox and Firefox ESR web browsers on May 20, 2022. The Thunderbird development team released a patch for the email client as well.
www.ghacks.net
Last edited: Yesterday at 1:49 AM
Reactions: SeriousHoax, Gandalf_The_Grey, Asterixpl and 1 other person

Thunderbird teams up with secure and private email provider Mailfence

Update Vivaldi 5.2 launches for the desktop and Android

Vivaldi Wednesday at 8:55 AM
silversurfer