I'm not even sure if the issue I have is malware, but I don't think it will hurt to at least get your guys opinion on the matter.

It started about 5 or so days ago. So I was playing a video game and I noticed my ping kept fluctuating. Weird, because nobody else in my house was using the internet. I click on network and there's a mobile device that I've not seen before. (Image 1) 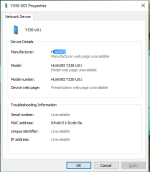 I thought a neighbour could be stealing our internet. So I changed the router settings to only allow the mac address of my laptop and my parent's laptop to connect to the wifi. This did not solve the issue - I clicked on network and another mobile device popped up - this time it was a different model with a different mac address.

I then went on task manager and something called 'COM surrogate' was running. I clicked on it and there appeared the mobile device. (Image 2) 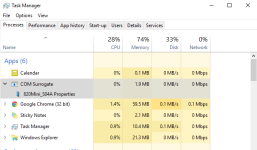 In one instance another router seemed to come up. (image 3)

Also, it doesn't appear to matter which laptop I am on (mine or my parents); devices will sporadically appear and disappear on the network.

Action taken: First I did a system restore on my laptop. Then I did full scans on both my and my parent's laptop with windows defender, it came back all clear. I did another scan on both laptops with malwarebytes anti malware, both came back all clear.

I've changed all router passwords and made them all more secure, nothing seems to work.

Currently I've disabled wifi and am using an ethernet cable; no mobile device comes up at all.

I appreciate anyone's help on this matter.


Your computer isn't infected. There is some Huawei device connecting to your network.
D


Your computer isn't infected. There is some Huawei device connecting to your network.
Click to expand...

Thank you for your response, it's reassuring to know that my computer isn't infected.

Do you think there is any possible danger with this device being there? Or is it too hard to tell with only this information?

Verified
I would reset router to factory settings and seek for a new software version. Not sure if it is dangerous, but if you're not familiar with this Huawei device then you should try to find out what is going on.
You must log in or register to reply here.

I cant uninstal a program that appeared without my consent