Vivaldi 3.2 for Android launches with improved tracker and ad blocking

by Martin Brinkmann on August 12, 2020 in Internet

The new Android version is already available on Google Play and existing installations on Android should receive the update automatically provided that automatic updates are turned on. Users who prefer to update manually can visit Google Play and hit the update button next to the Vivaldi browser there to start the update process.

One of the main new features of Vivaldi 3.2 for Android is the improved tracker and ad blocking functionality that is baked into the browser.

The lists that are integrated by default include country-specific lists now among others.

Vivaldi for Android users may enable or disable the blocking for individual sites as well through the Shield icon. A tap displays options to switch between no blocking tracker blocking, or tracker and ad blocking. 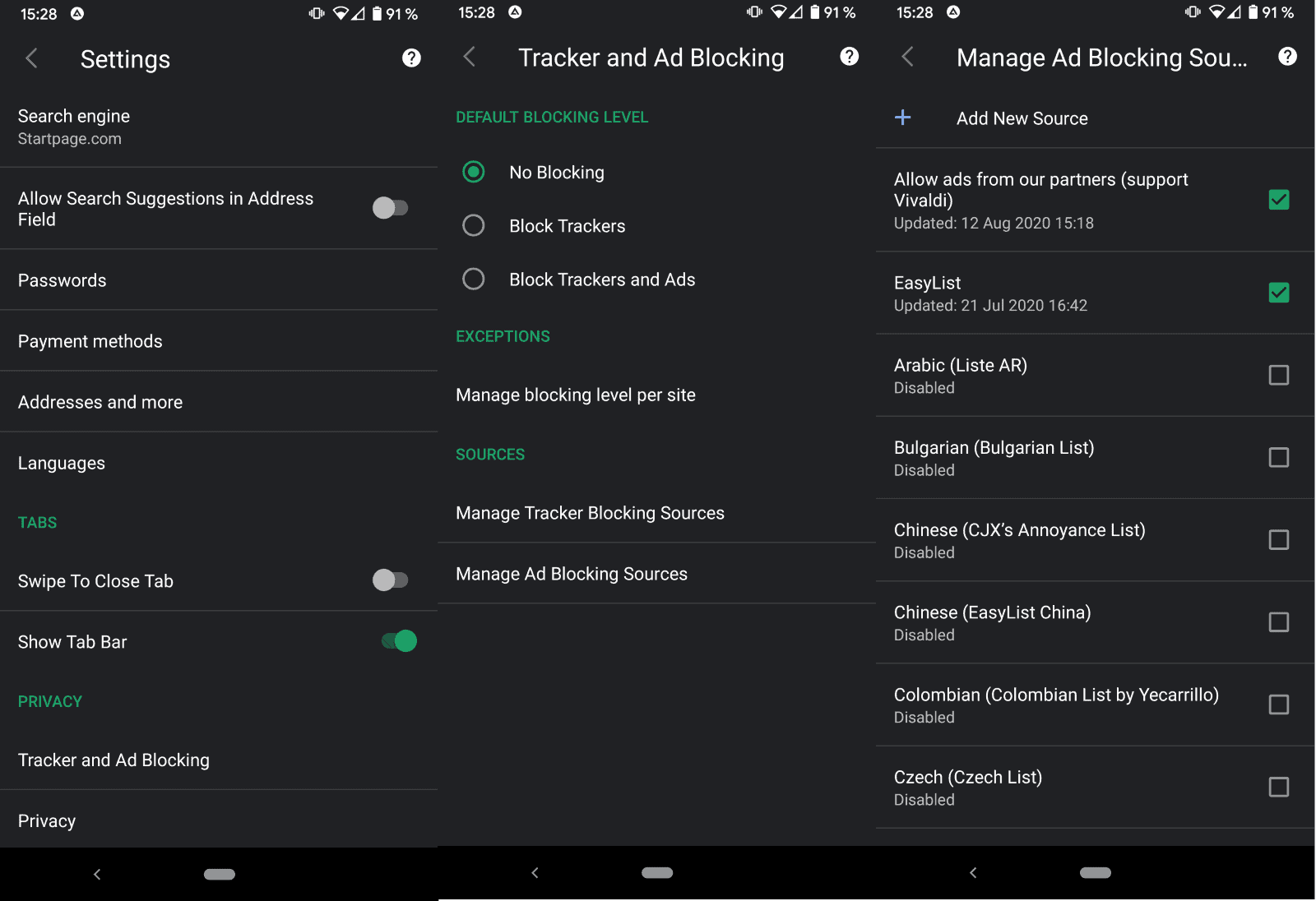 Note that Vivaldi is configured by default to show ads from partners. Vivaldi Technologies revenue comes from these partner deals but users may disable them under Settings > Tracker and Ad Blocking > Manage Ad Blocking Sources; all it takes is to remove the checkmark from "Allow ads from our partners (support Vivaldi)" to do so.

Work on improving the usability of the browser's New Tab page continued in Vivaldi 3.2 for Android. Vivaldi Technologies did improve the New Tab page in the last version already by adding icons to the bottom to switch between Bookmarks, the History, Notes and Downloads. In this release, users may now switch between open, private, recently closed, and synced tabs when they open the list of tabs on the New Tab page.

One of the distinguishing factors of Vivaldi for Android is the mobile browser's support for a tab bar. Unlike most browsers for Android, including Firefox, Opera, Chrome, Microsoft Edge, or Brave, Vivaldi displays a tab bar at the top to mimic the tab bar of desktop browsers.

Vivaldi 3.2 includes other improvements and fixes. Users who had troubles using the browser's copy to note feature to add content as a note for safe keeping may find the issue resolved in the new version of the browser. Other changes include hiding the bottom bar when launching in landscape mode, and the display of the profile picture in the sync settings.

Do they have plans to implement extensions system of Kiwi browser?
Reactions: oldschool
You must log in or register to reply here.

Vivaldi Today at 10:23 AM
silversurfer