Mozilla is working on a machine-based translation engine, codename Project Bergamot, that is funded by the European Union. One of the main distinguishing factors of the project is that it does not require a connection to an online server for its translations.

The extension has been renamed to Firefox Translations, and released as version 0.4 recently.

Firefox Translations 0.4 introduces several improvements and changes, compared to version 0.3 which the development team released in April 2021.
Click to expand...

First, the basics. Translation functionality is limited to a handful of languages currently. You can translate English, Spanish and Estonian currently, and also from English to German (but not from German to English). The extension can be loaded in Firefox Nightly only, and you need to make configuration changes to do so.
You need to remove the old Project Bergamot extension from Firefox before installing the new one. Also, make sure that the preference dom.postMessage.sharedArrayBuffer.bypassCOOP_COEP.insecure.enabled is set to FALSE.

Note that Firefox Translations will send Telemetry data to the project, if Telemetry sending is enabled in Firefox. If you don't want that, disable Telemetry in Firefox.

The first thing that you may notice is that the extension's size has been reduced significantly. It had a size of more than 120 Megabytes previously thanks to the inclusion of the language data.

The new version has a size of less than 4 Megabytes as language data is now downloaded on demand when the first translation job for a language is started.

Firefox displays a translate toolbar on foreign language pages, if the language is supported by its translation feature and not one of the display languages of the browser.

You may select to translate the page right away, or use the options menu to hide translation prompts for the site or the source language. An option to always translate a language is not available yet.
Click to expand... The extension divides pages into different parts and translates them one by one. The translations take a bit longer than cloud-based translations of Chrome or Edge, but you can start reading the translated content right away as translations happen from top to bottom. The translation speed has been improved significantly, especially the first attempt.

In version 0.3, the first attempt could take between 10 and 30 seconds as data needed to be loaded; this has been reduced to a second or two in the new version. There is still room for improvement, but the experience is much better already.
Click to expand...

Firefox Translations is on a good way. Version 0.4 introduces significant improvements, especially in regards to the initial loading of translation data, translation speed and transparency, and the separate downloading of language packs instead of bundling them with the extension.

Translations work well already. Next up is support for more languages and ongoing performance improvements.
Click to expand...

Extension works in Firefox Nightly only. That is why I was getting this download is corrupt error.

My fault for skimming the article. lol
Reactions: Deletedmessiah, CyberTech, Nevi and 2 others

Today, still in May 2021, Mozilla included the latest version of the translation engine into the Firefox Nightly browser. The feature is not enabled by default, but all users who use the latest Nightly version can install it. The Nightly version on my test system had the version 90.0a1 (2021-05-29).

The translation feature supports only a handful of languages at this time, including English and Spanish. Support for more languages will be introduced soon.
Click to expand...

Firefox Translations adds an icon to the browser's address bar; a click on the icon displays a toolbar that resembles the translate toolbar of other browsers. Since Firefox Translations is running all translate jobs locally, it is necessary to download language packs that power the functionality.

When a user selects a language for the first time, its language pack is downloaded to the local system. Once downloaded, Firefox will identify the language automatically. The system language is not displayed as a translate source. If Firefox is in English, you won't get translate options to translate English pages to another language, only the other way around.

Besides improved language support, work on improving the performance of the translate feature has continued. There is room for improvement, as there is a noticeable delay between hitting the translate button and receiving the translated page. It took a second or two in tests, but mileage may vary. Translation quality was excellent, but more tests are required to assess the quality and compare it to translations by popular online services.

The latest Firefox Translations add-on is available on GitHub. It can be installed in Nightly and Developer editions of the web browser. Users need to set the preference xpinstall.signatures.required to FALSE and the preference extensions.experiments.enabled to TRUE on about:config to install the add-on in the browser.
Click to expand...

Built-in translate functionality that is privacy friendly could give Firefox a much needed boost once it is integrated into the stable version of the browser. There is no fixed date yet. Mozilla still has work to do, including adding more languages and improving the performance of the service further.
Click to expand... 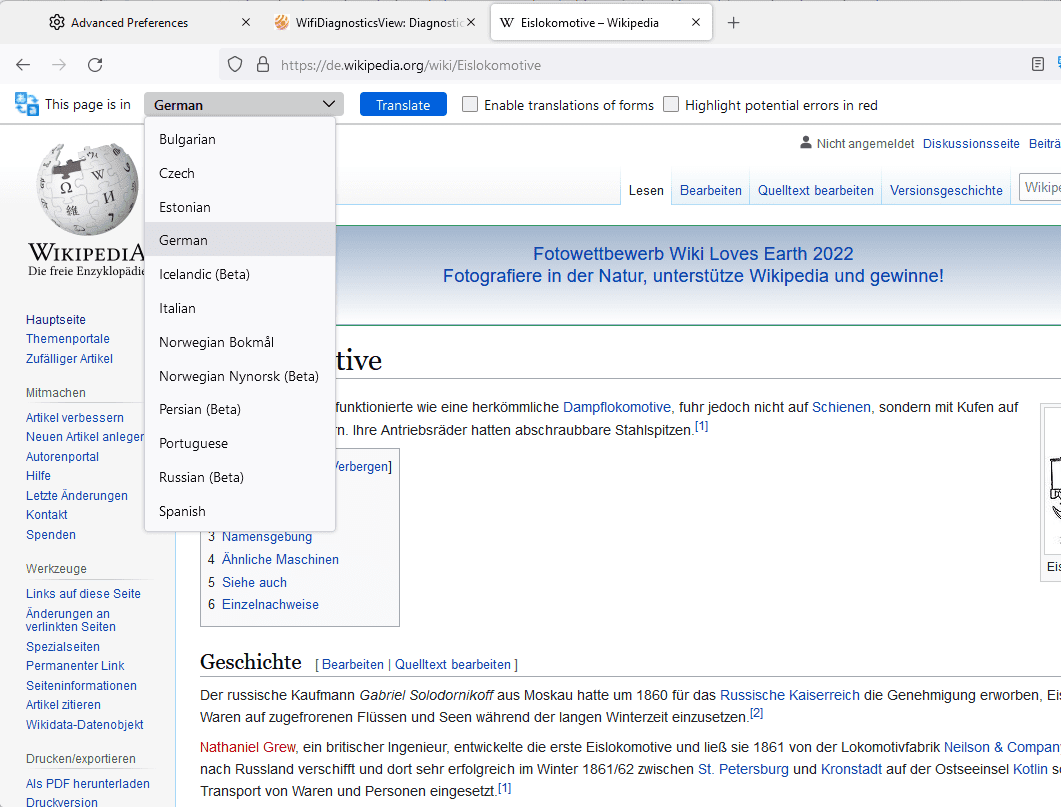 Firefox Translations provides automated translation of web content. Unlike cloud-based alternatives, translation is done locally, on the client-side, so that the text being translated does not leave your machine. 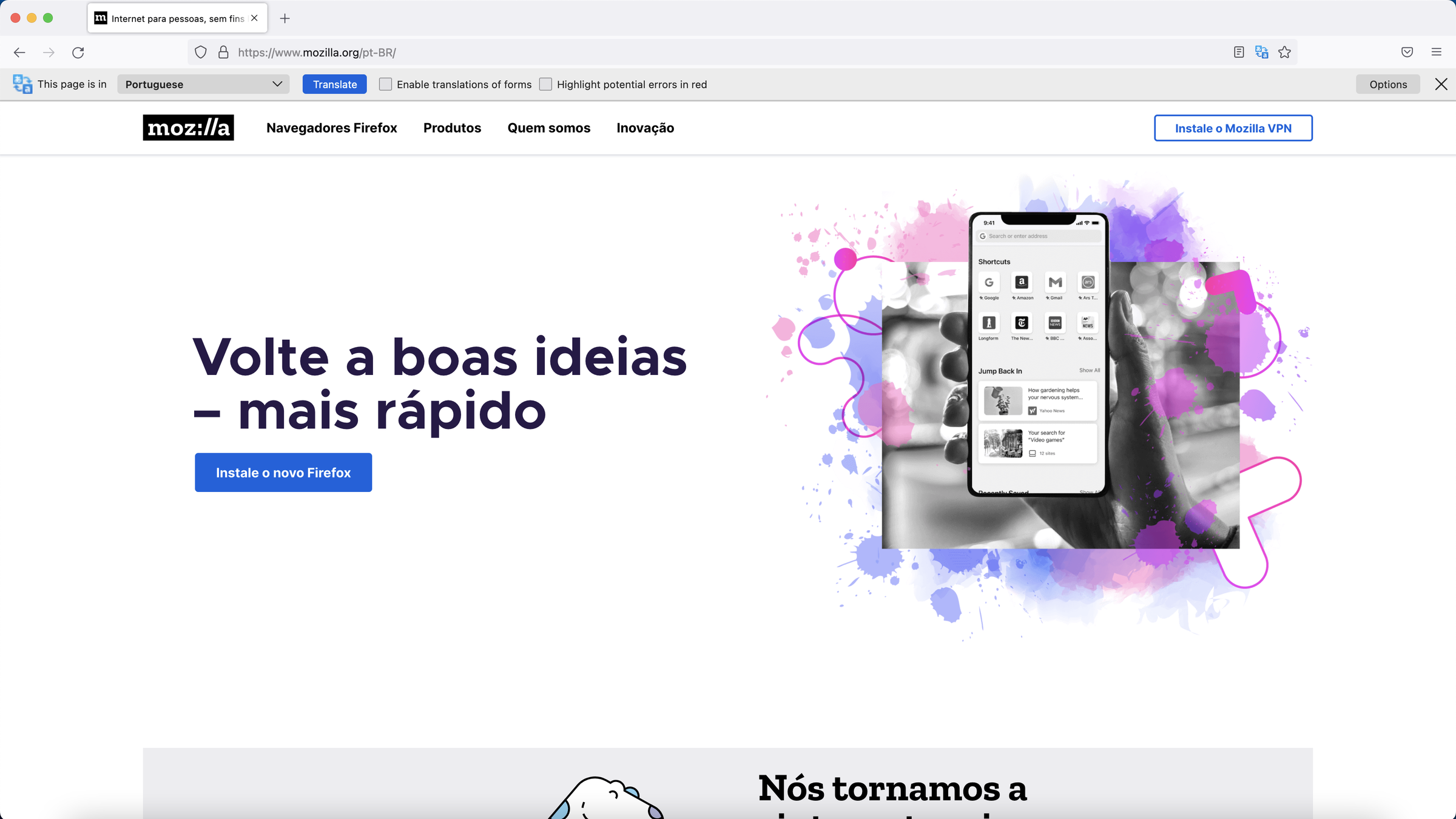 Firefox Translations – Get this Extension for 🦊 Firefox (en-US)

Download Firefox Translations for Firefox. Translate websites in your browser without using the cloud.

The most recent Firefox Translations update, released on July 22, 2022, introduces support for French, Polish and Ukrainian translations. The integration works exactly like that of other languages. When you visit a foreign language page, Firefox Translations displays its toolbar on the page. A language file is downloaded to the system when the translate button is selected; this happens once for each of the supported languages, but only if the language is required.

The new Firefox Translations release, version 1.1.3, includes several improvements and changes besides that. Language detection is improved in the new release, as the extension checks the page's markup as well now to take information into account when determining the language of a webpage.

Other changes include a new high resolution icon, making the user interface responsive to address display issues, and improvements to in-page translations.

Some users may experience issues with the newly added languages. They may not appear in the "this page is in" dropdown box and there may be no "never translate language" option available. Translations do work by simply activating the translate button, and Mozilla is already working on a fix.
Click to expand...

Mozilla released an update for Firefox Translations that is adding support for French, Polish and Ukrainian translations to the browser add-on for Firefox.
www.ghacks.net
Reactions: Deletedmessiah, The_King, harlan4096 and 2 others